Sundance Review: Riotsville, USA is an Archival Indictment of a Police State 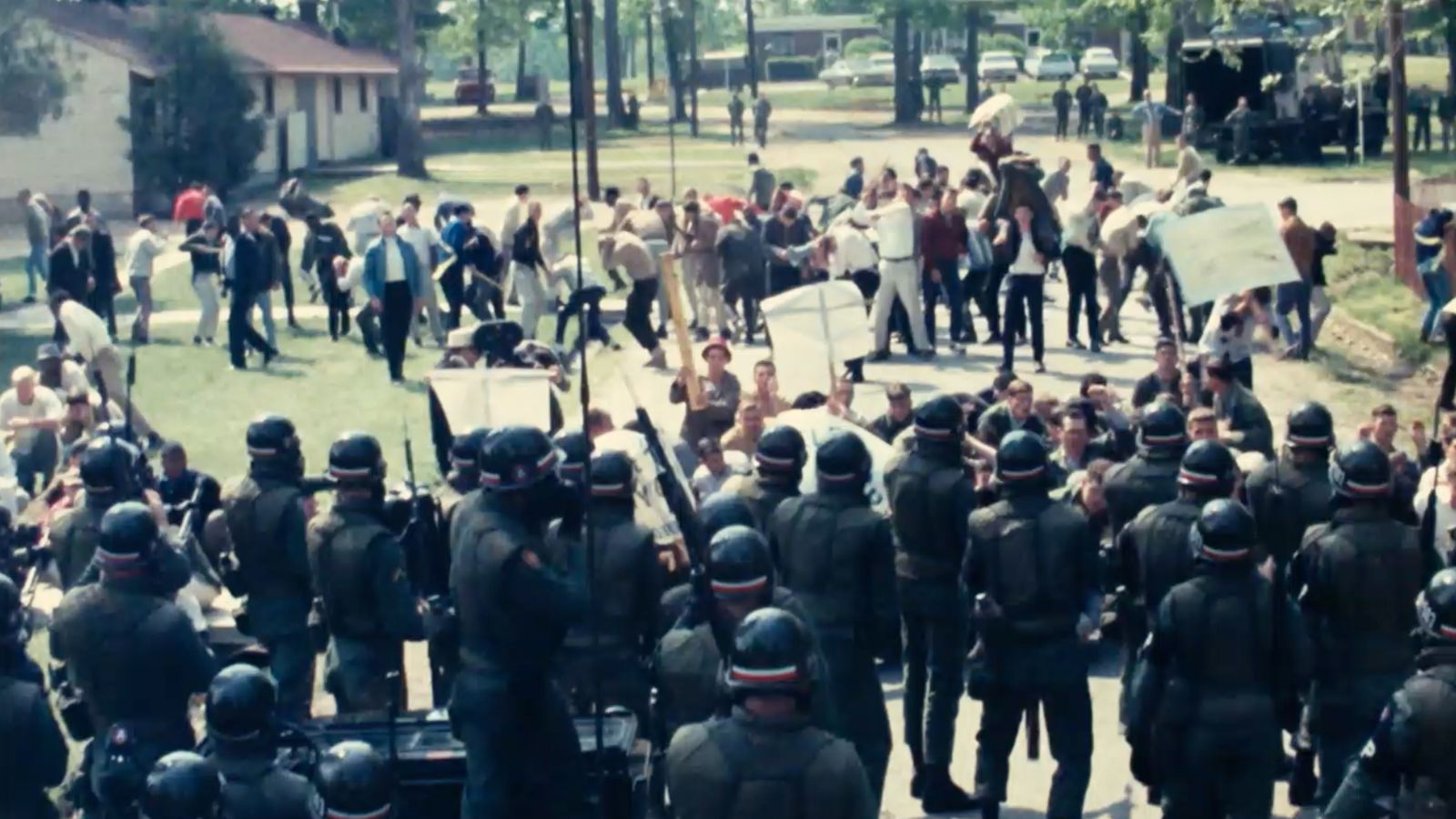 Riotsville isn’t just a place. It’s an idea; a fiction written by the enforcers of order to “demonstrate the presence of a superior force.” Riotsville is portable and meant to be transplanted no matter the material conditions of what it may disturb. Riotsville is violence done to civilians in the name of maintaining their own civilized society. To put it bluntly: Riotsville is federally funded fascism, and as director Sierra Pettengill’s urgent, meticulously collaged documentary outlines, it laid the foundation for the tactics and overwhelming funding of police brutality we see today.

Riotsville, USA is a documentary made entirely of archival footage from the 1960s, much of it helpfully recorded by the U.S. military. Guided by stark intertitles and a poetic narration written by scholar Tobi Haslett, the film takes a micro and macro view of the ‘60s as a flashpoint for blatant disregard of American––especially impoverished Black American––social needs. We open with the titular, literal Riotsville: a brick-and-mortar ghost town the military has modeled as if a shoddily designed movie set’s Main Street, USA. This is where the military will divide into pretend outside agitators and mobs of gullible, violent civilians, and the tactical unit that will demonstrate (to police flown from around the nation) how to kettle and forcibly subdue all social ills.

The documentary contextualizes the construction of Riotsville with the social and political consciousness explosions of the late 1960s. With the Vietnam War losing popular support daily and eruption of protests met with violent police interventions across the nation, President Lyndon B. Johnson takes to the airwaves to announce his National Advisory Commission on Civil Disorders. Archival footage captures a selection of Regular Joe Americans gathered around a television—a test audience for the speech. Most of the gathered Americans, in horn-rimmed glasses and button-down shirts and dresses, agree something has to be done. Only one of the group is perturbed by the lack of representatives from the area most affected by this summer of brutality: the ghetto.

Even with such a politically moderate group of Johnson loyalists—on what came to be known as the Kerner Commission, after Illinois Governor Otto Kerner—the film notes that their findings within 700-plus pages of statistical and philosophical research boil down to one thing. The summer’s “civil unrest” was not the result of “outside agitators” (a rhetoric you might recognize today), or even one specific event. Black populations were at severe economic and social disadvantages compared to white populations, the study concluded (though it did not emphasize the most obvious reasons for that), and in order to avoid such unrest, the government was tasked with intervening. The most major of suggested interventions were to target the dearth of housing, employment opportunities, education, and social services. And out of the enormous budget required, a fraction should be spent on funding for police. In the midst of the largest scattered uprising against the state, you can guess which proposal actually panned out.

Communicating just this context is a massive undertaking, but Pettengill and editor Nels Bangerter structure the documentary impressively. The title cards are pointed and sharp, and insertions of news footage or unedited interviews—e.g. the largest manufacturer of tear gas in the world defending his product as humane before needing to cut and backtrack—is always motivated. Though the narration can be moving and sets an eerie, damning tone especially in its formidable introduction, it’s also an added texture that floats across the film and isn’t always needed. Some of the most prolonged moments of archival footage are also the most powerful for being left alone.

One such segment follows footage of Riotsville players using gas hoses and helicopters as a Democratic Senator blames Martin Luther King, Jr for inciting riots and never sticking around to be held accountable, followed by a title card announcing Dr. King’s assassination the next week. On PBL, the dissolved forefather of PBS, folk singer Jimmy Collier and Reverent Frederick Douglass Kirkpatrick play and sing the protest song “Burn Baby Burn.” Collier, an artist and activist who played with the likes of Pete Seeger and Bob Dylan, is dulcet and persuasive, even as his words are thunderous, condemning the courts, police, and President Johnson for the strangulation of Black life. Pettengill includes the entire song, an emotional and convincing statement: Collier and Kirkpatrick could have told you what the Kerner commission took seven months and 700 pages to convey.

Of course, the real shock of this documentary is all the footage of Riotsville itself. One can’t help thinking, with each roll of violent theater, that we’re not supposed to see any of this. It should be shameful, not helpfully and cheerfully documented by the military. As the documentary demonstrates again and again, through forums on PBL and interviews in the streets, Riotsville is consistent with public and private sentiment: that the police, an extension of the military, are “the thin line between crime and society.” Why would they be ashamed of treating civilians with “truly necessary force,” even indiscriminately and arbitrarily? What shame would come from the revelation that sniper fire––something referenced in dozens of Riostville gameplans and the cause of many bystander deaths––was by and large an utter fiction?

The unraveling of the Liberty City riots is another incredible, tragic example of Pettengill demonstrating the direct effects of Riotsville and the complicity of media that took police at their word rather than doing their own investigation. Though it doesn’t reveal something particularly new about this historical collusion, it is an impressive weaving of all the moving parts, large and small, that come together to cement one point of view as acceptable.

What Riotsville, USA does most successfully is remind us no individual actions can be shamed under the ethos that everything a cop does is for the good of society.  And when an entity either believes that, or simply has enough funding to pretend to believe that moralistic motivation, what are the rest of us to do? When those in power are allowed to create and diagnose ills in a complete vacuum, it only follows that they may forever prescribe its antidote.