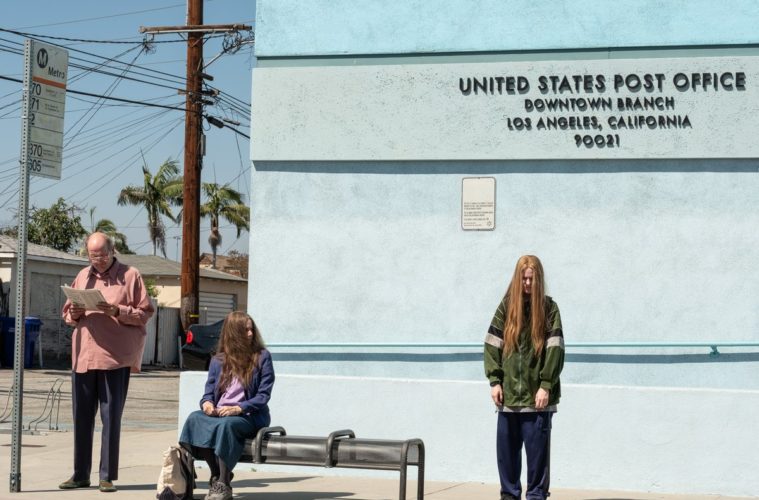 If one closes their eyes and imagines what a con movie in the hands of Miranda July might look like, I still don’t think you’d get anywhere close to what Kajillionaire actually ends up being. Then again, it’s precisely those creative impulses for the unexpected that has made the writer-director’s work so special. With her third feature, she crafts a singular story about the bonds of family and what happens when those bonds are tested–or never existed in the first place. More abstract than her previous films–and therefore, I imagine, off-putting to many–the steady, surreal, and sweet flashes of brilliance in this one-of-a-kind story are enough to sustain interest during some of the more tedious passages.

We’re introduced to the Dyne family of scam artists, Theresa (Debra Winger) and Robert (Richard Jenkins) and their daughter Old Dolio (Evan Rachel Wood), as they attempt one of their easiest, occasionally most rewarding heists: evading the Post Office cameras and reaching into their PO Box and grab whatever mail happens to be in an adjacent one. The 26-year-old Old Dolio takes orders from her parents, who are perpetually thinking about the next swindle they can pull off with no consideration of a long-term plan. Reeking of constant desperation but molded with a great deal of empathy, the only thing currently on their minds is trying to pay the few months of back rent on their apartment. They live next to a bubble factory, which is run by their “no-filter” landlord, a man who physically can’t hide his emotions and becomes conflicted between evicting them and having them live in a less than hospitable location. In an ingenious bit of memorable Charlie Kaufman-esque imagery, multiple times a day a massive wave of foam leaks from the ceiling into their dilapidated office building. With no explanation for this phenomenon from July until after we first witness the occurrence, it sets the stage for the bizarre adventure, which soon gets a new member added to the team.

During a back-to-back cross-country flight to pull off a scam involving lost luggage and travel insurance, Robert and Theresa find a talkative and inquisitive seatmate: Melanie (Gina Rodriguez). She wants in on the action and starts to join their clan, but Old Dolio is suspicious, in part because this new energetic, outgoing, and alluring woman is exactly the opposite of her in virtually every way. Isolated from popular culture due to her parents’ sole focus on tactful plundering, Evan Rachel Wood’s look is straight out of The Wolfpack with hair that has seemingly never been cut as she wears the same tracksuit outfit every day. Her performance is one of strange inertness, which is so dedicated it’s rather commendable. Both her commitment to evoking this life of utter repression and July’s decision to not take the cliché way out of eventually transforming her physical look after an awakening leads to the film’s stand-out performance.

In a few sequences that might have one thinking of Parasite, these money-seeking drifters enter the homes of Melanie’s clients. She works at supplying optometry options and comes up with the plan to home deliver what they need as their new family and, in the process, convince them to give up their old antiques that the Dynes could then sell. Things, of course, get out of hand, but along the way, in one house, they end up pretending to be the makeshift domesticated family that they never were. It’s in these slightly elongated sequences that the film drags a bit, not necessarily having the wonder or the wit that’s present in much of the other film. Soon enough though, a more dramatic arc kicks in wherein Old Dolio questions everything she thought she knew about her family, leading to an utterly brilliant, transportive trip amongst the stars and a deepening of her relationship with Melanie that leads to a perfectly-executed final shot.

With Kajillionaire, Miranda July is questioning precisely what it means to be a family and how parental decisions can cause unintended ripple effects that might not be realized until it’s too late. While the scale of the film is perhaps shockingly small for what one may envision a con movie to be, the atypical emotions and bizarre rhythms that are being played out are wholly her own. The setting of the foundational framework will take some getting used to as July jumps from the strange to the stranger with no sense of how the themes she’s exploring may fall into place, but once they do, it’s rewarding to reflect on the abnormal yet oddly satisfying journey we’ve been on. The ultimate con of sorts is that we may have taken for granted the time we were able to spend with these characters, and it’s only in the final moments we realize how much we’ll miss them.