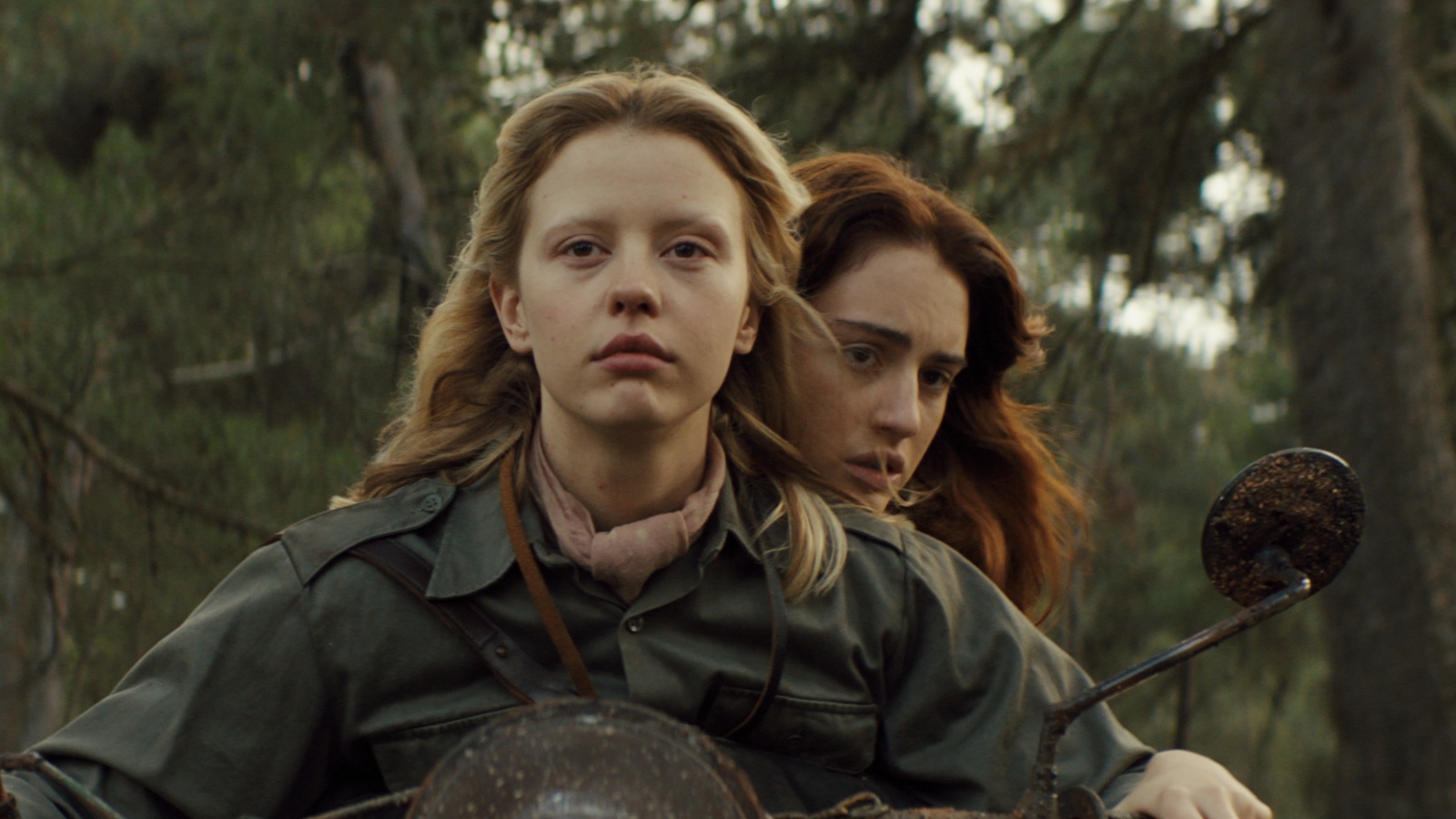 Not far removed from the island nation of Themyscira as recently seen in Wonder Woman’s big-screen/HBO Max adventures, the world of Mayday is one dominated by women. Establishing little rules or context with its fable-esque qualities, Marsha (Mia Goth) is the leader of a small crew of female soldiers, destined to decimate any men that may find themselves in their crosshairs. Oh, and everyone may be dead and this is all some sort of otherworldly realm. Such is the strange set-up for Karen Cinorre’s folkloric, ambitious debut feature, which intrigues with its unexpected tonal melange, even if the execution comes up lacking.

Before the film’s protagonist, Ana (Grace Van Patten), arrives washed up on a mysterious shore, she’s introduced beginning a day’s work as part of a catering team at a wedding venue. She has a friendly relationship with her co-worker (Théodore Pellerin), who also moonlights as the wedding musical entertainment, but the rest of her life seems upsettingly punishing. Contending with a vicious boss who berates, slaps, and sexually abuses her, Ana is living in a withdrawn state of fear. In this reality, Goth’s character is getting married, but before the ceremony begins, an electricity mishap occurs and Ana enters a peculiar alternate world through her own Lewis Carroll-style rabbit hole: the kitchen oven.

The new world we’re brought into initially feels rather idyllic as Ana becomes a sharpshooter amongst her tight-knit crew of four women, also made up of Bea (Havana Rose Liu) and Gert (Soko). “Girls make excellent snipers. A sniper must endure uncomfortable positions for hours. They know how to make themselves invisible,” Goth’s character tells Ana. In this place, Goth is not a fretful bride-to-be but rather a dominating force, cunningly leading boats filled with male soldiers to their demise via prank radio broadcasts. As an actress who so often gets relegated to the ominous supporting role, it’s immensely satisfying to see a new side from her here. Effectively exploring the ways in which women often have to put up a facade to bend to the desire of men, she gives Ana notes about showing less authority and becoming “softer” in her voice to easier trick and destroy their enemy.

As phrases and people glimpsed in the real world pop up in this new reality––reflected and refracted with different meanings––Ana is pushed to confront her demons by literally going to war with any male soldiers in sight. Played with a gleeful fierceness, Goth’s Marsha has a take no prisoners attitude throughout the fight. When asked why they don’t just capture soldiers instead of killing them, she says, “We’ve tried that. That was exhausting.” A pointed metaphor for women being fed up with trying to hash out their differences with the half of the population who constantly undermines them, it’s clear that Cinorre had the most satisfaction writing Goth’s character. Taking a metaphorical, mythic approach, Mayday explores a rare kind of female freedom within this WWII-esque setting, and how the horrors of real life pervade even in an imagined dream world.

It’s a shame, then, that with this promising concept much of the film lacks a particular drive and focus. In the brief section of the real world, we learn so little about Ana’s personality that she becomes more or less an audience cipher for the rest of the film. The stakes are never clearly set with the battles happening both on a bigger scale and inside the central group, as the film progresses, so we drift along wondering what each action means for the larger picture. For a good part of the second art, there’s the suspicion that most scenes could happen in virtually any order and, while many are compelling on their own (including an unexpected musical number), an overall sense of momentum is missing.

Cinorre is keenly aware how of empowering it can feel to see a group of female soldiers in a genre that’s almost wholly focused on the other sex, and she pulls off impressively dreamy imagery in stretches of Mayday. Cinematographer Sam Levy (Frances Ha, Lady Bird) lends a beautiful eye to the Croatian coastlines where production took place, despite feeling a bit lost in building tension elsewhere. The score by Colin Stetson (Hereditary) is rather upbeat when compared to his most notable soundtrack work, fitting for this fantasy world. As a debut feature, the pieces are there to entertain, edify, and transport one into a new realm––here’s hoping that in Cinorre’s follow-up, these elements will more seamlessly congeal.