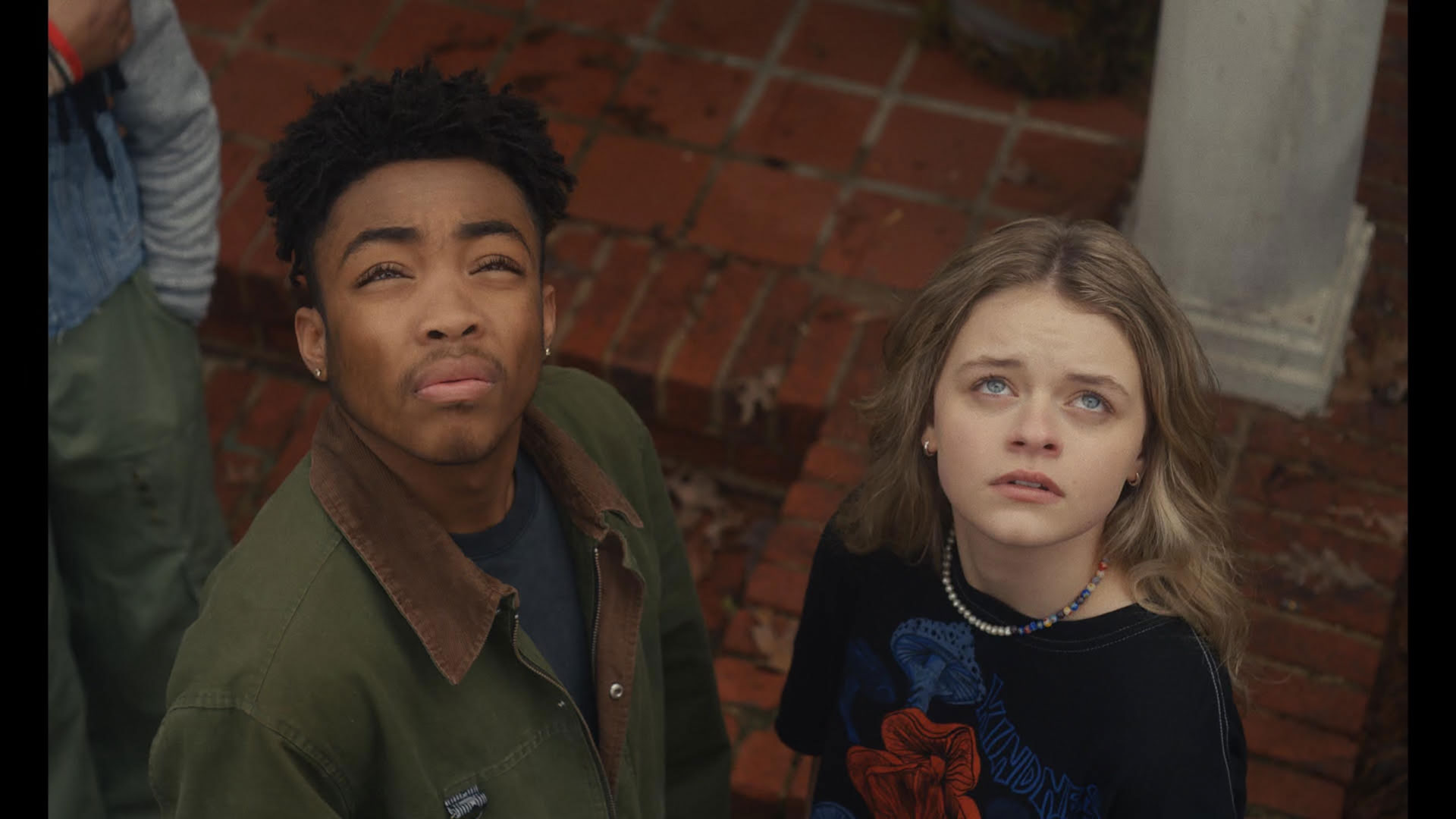 For the last seven decades, aliens have been observing humanity, waiting for the right moment to touch down. When they finally do, after the world’s best military efforts to scare them fail, they broker deals with those wealthy enough to live high above the planet in their floating cityscapes. The less fortunate are left to fend for the scraps that remain of Earth, which now relies on the synthetic, cheap mass production of cubed food the aliens invented, along with other “innovations” to improve productivity and labor costs. This is the world of Cory Finley’s third feature Landscape with Invisible Hand, an adaptation of M.T. Anderson’s novel that initially intrigues with its lo-fi sci-fi ambition but has too much on its mind without saying anything interesting at all.

Landscape is demarcated into sections introduced with paintings of what lies ahead, the artist of each being Adam (Asante Blackk), a high schooler who paints what he knows. His existence is not pretty, even though it is more comfortable than most on the planet. The alien overlords now governing are called Vuvv, small beings who look like a “gooey coffee table,” in the words of one of the characters. Mostly remaining high in the sky, they communicate through small headsets, both for incoming messaging (such as the school curriculum) and the opportunity for humans to broadcast to the advanced creatures. With the idea of romance a foreign concept to the Vuvv, who asexually reproduce, they are fascinated seeing the courting process. So when Adam’s new classmate Chloe (Kylie Rogers) is displaced like so many others and needs a home, he invites her family to stay in their basement and, to make ends meet, the two teenagers strike up a relationship to broadcast to the alien species.

As aliens question the veracity of their relationship, Landscape offers thinly veiled commentary on the falsities of today’s influencer culture of live-streaming and vlogging. But instead of having anything worthwhile to say about such obsessions, Finley abandons the plot thread and quickly jumps to the next topic. Going on to provide surface-level observations on class divides, finding hope in a hopeless world, single parenting, artistically selling out, the dangers of capitalism, facing bureaucratic strangleholds, the true nature of love, and much more, Landscape with Invisible Hand brings up a plethora of pertinent ideas only to discard them with little wisdom. In flashes of the otherworldly as we witness bleak visions of this alien way of life (think the world of the machines in The Matrix), Finley never settles on the proper tone, the film seemingly pulled in too many directions to sway far darker and stranger or follow through with earnest emotion. Meant to also satirize with dry humor as we see how humans attempt to please the Vuvv, there are some amusing passages about learning their impossible language, based entirely on noises from their flappy limbs, but the intended comedy produces nothing more than a slight smirk.

In his feature-film debut, Blackk impresses by bringing a level of grounded humanity to the high-concept shenanigans, while Michael Gandolfini and James Hamilton, playing Chloe’s family, bring a compelling sense of exasperation and rage at the situation. As Adam’s mother, Tiffany Haddish seems rather lost, given the unenviable task of being dramatically assertive, trying to do best for her family standing up to the Vuvv, while also playing up a bit of humor and never finding a convincing balance. Meanwhile, Chloe’s character is more or less forgotten as the narrative shifts into a different gear.

After impressing with the more convincingly crafted and precisely written Thoroughbreds and Bad Education, it’s not difficult to see what attracted Finley to this strange tale of family-focused sci-fi, with its real-world parallels to the ills of modern-day society. Yet the director seems out of his element at every turn, attempting to juggle its many ideas but failing to untangle a single one in a satisfying way. As if putting all of his attention on trying to sell this peculiar new world, Finley seems to have forgotten what made author M.T. Anderson want to tell the story in the first place.

Landscape with Invisible Hand premiered at Sundance 2023 and will be released by United Artist Releasing.