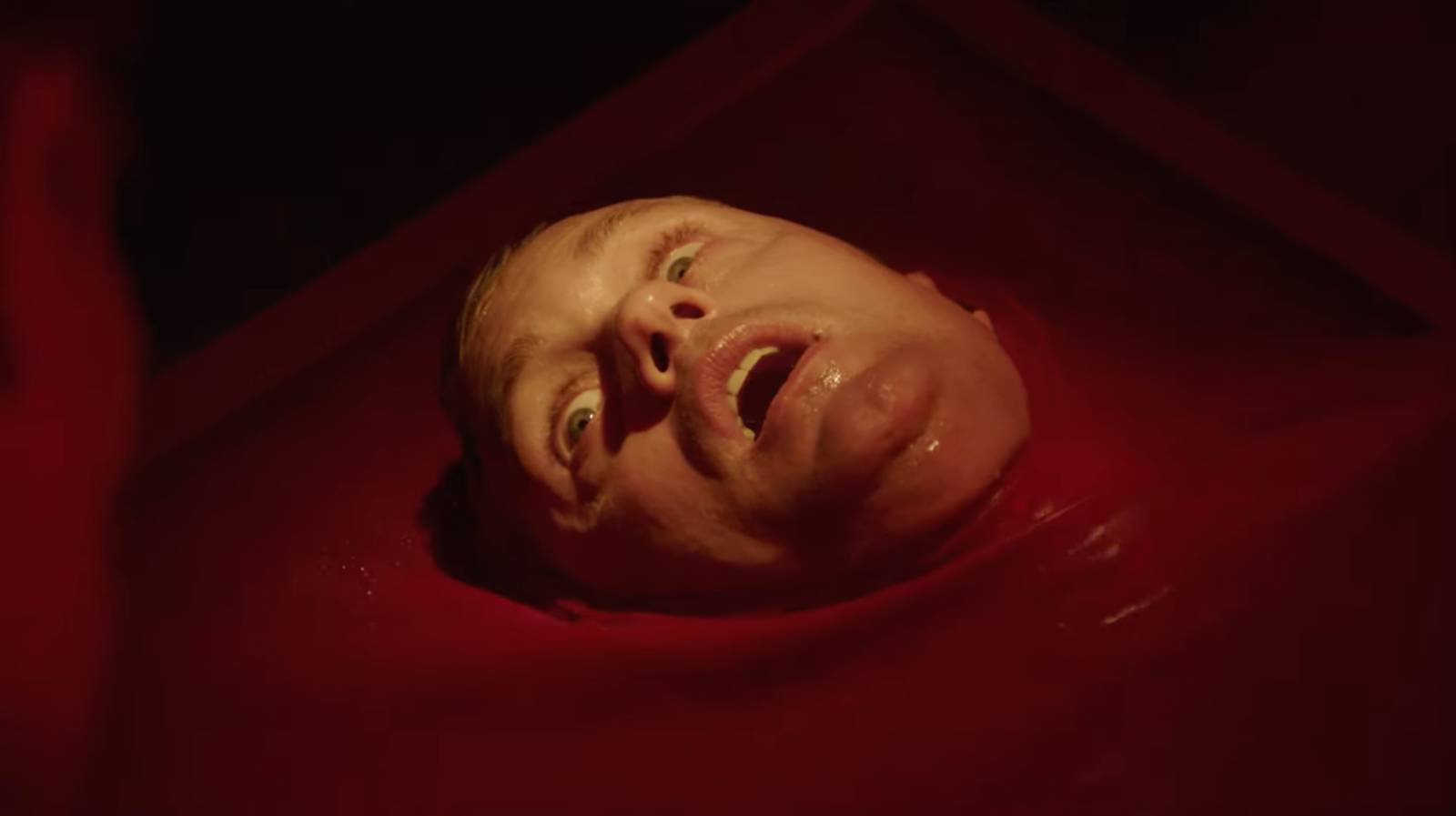 By now the Cronenberg surname has become synonymous with bodily obsession. Like his father David’s wealthy oeuvre of anatomical grotesquerie, Brandon Cronenberg has taken the torch and developed his own small, corporeal-minded canon, blending a gory imagination with sharp socio-economic fables. More than his chilling, futuristic narrative concepts, it’s his sensory details that overwhelm and entrance, grounding science fiction in the earthly vulgarities and excretions that deliver genuine shocks instead of cheap thrills. That he can keep twisting the knife and warrant an appreciation for his detail and dexterity is a rare gift.

After all, it’s still hard to erase Sean Bean’s bludgeoned and oozing face (or the squishing sounds of his flattened eyeball) in Possessor, Cronenberg’s recent film about corporate assassins using mind transfer to eliminate their enemies. The abstracted, bright-colored flourishes and chamber-thriller structure––not to mention its punctuated moments of extreme carnage––provide a crimson foundation for the writer-director’s third and latest feature, Infinity Pool, a blistering big swing that matches its unique premise and privileged-class takedown with his very specific violent, pornographic palette.

Cronenberg’s queasy carnival is an all-inclusive, high-end beach resort in Li Tolqa, a fictional Eastern European country where author James Foster (Alexander Skarsgård) looks to cure his writer’s block with his wealthy wife Em (Cleopatra Coleman). But what should be a relaxing getaway quickly turns into a rule-breaking thrill ride when Gabi (Mia Goth), a fangirl of James’ six-year-old novel, requests the couple join her and her partner, Alban (Jalil Lespert), for a picnic adventure outside the barbed-wire gates. Late at night on the way home, James, reeling from an unprompted sexual encounter, accidentally hits and kills a local with his car, sending the four into a fraught legal nightmare.

At least at first glance. Though guests are told never to venture into Li Tolqa, an impoverished and unregulated area with a criminal and superstitious underbelly, James soon discovers at the local precinct that his punishment for manslaughter has a caveat. Though the victim’s son must avenge his father’s death, as long as criminals are willing to pay a large sum they’ll be cloned and forced to watch their double’s execution instead. It’s too gruesome of a penalty for Em to stomach, but as he witnesses himself being brutally stabbed, James can’t help finding some perverse pleasure in the experience. If he can escape murder with a cash payment, what’s to prevent him from trying it again?

To Em’s revulsion, Gabi quickly seduces James down that thought experiment’s rabbit hole, introducing him to her enclave of other wealthy friends who have fully succumbed to their hedonistic impulses thanks to this legal loophole. Soon they plan other criminal adventures: donning monstrous masks, trespassing onto other properties, and returning to the country’s temporary prison to enjoy their clone-killing theater, where they’re allowed to take home their double’s ashes before doing it all again. Though it loses some narrative thrust in an orgiastic second half, Infinity Pool––contrary to recent online banter––remains a coherent, altogether ambitious play on “eat-the-rich” commentaries that have more frequently infiltrated pop culture. Where The White Lotus climaxes with an untimely death, Cronenberg never flinches from pointing the pistol (and his finger) at these thoughtless killers early and often.

At one point a member of this wealthy collective considers the existential possibility that everyone might be a clone––that his original body had been swapped for stabbing and slitting and he’s just a carbon copy. “I’ll never know if I’m myself as long as I live,” he says. How would any of them be sure? It’s a terrifying proposition that James must consider while the group pushes him further into this hypnotic game. When hallucinogenic drugs engorge everyone’s libidos, morphing genitalia and turning the screen into a neon-soaked abstraction, Cronenberg challenges you to cede control like Skarsgård. He’s not asking you to partake in the amoral mess, but whiff the fleeting allure of an inconsequential lifestyle.

As a descent into madness and tale of rebellion, Infinity Pool necessarily leans into its lead performances and hands them an exceptional amount of slack. Is Goth the most enigmatic and unpredictable young actor today? It’s hard to argue against the idea after seeing her zero-to-60 masterclass in Pearl, and it’s almost impossible upon witnessing her seduction and control over Skarsgård, who can oscillate from fearful sheep to ravaging dog in the same scene. Like a parasite, Gabi grows stronger and more chaotic the more James rebuffs and relents to the group’s decisions, and Goth seems to relish the boundaryless potential of her vile behavior.

“It’s really so disgusting that you would just sit there and watch it happen like a robot.” Em tells James upon seeing his clone get murdered for the first time. “What’s wrong with you?” The admonishment is almost too transparent, a question Cronenberg has effectively made his cinematic dissertation. Though he’ll always carry an association with his father, it’s clear he’s carving his own defined style and sensibility, excavating the darkest recesses of voyeurism and the hellish landscapes that incense and inflame just as much as they reflect. Cronenberg knows he can hook and dangle you. He’s skilled enough to also know you can’t look away.

Infinity Pool premiered at the 2023 Sundance Film Festival and opens on Friday, January 27.