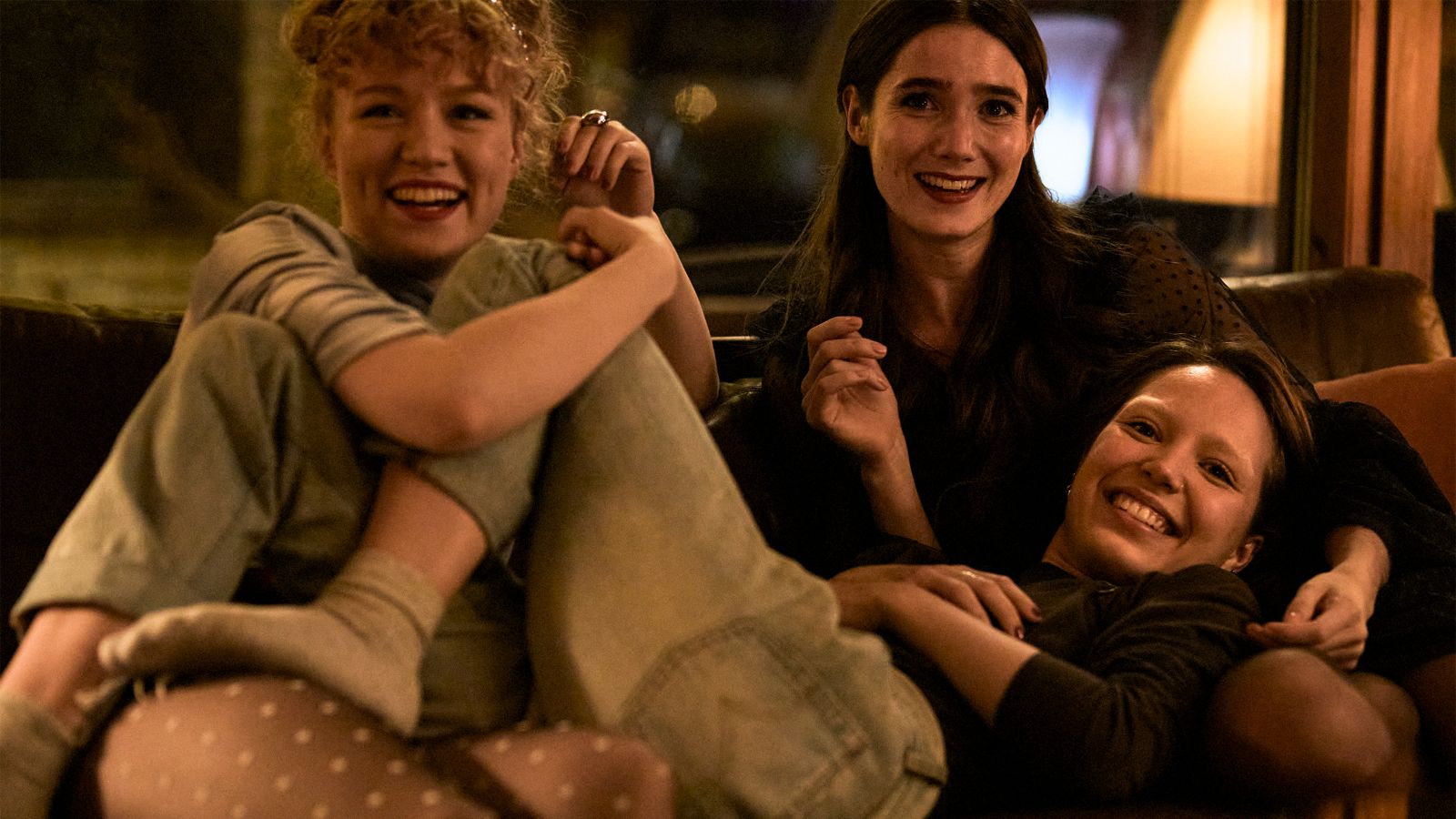 Mimmi (Aamu Milonoff), Rönkkö (Eleonoora Kauhanen), and Emma (Linnea Leino) are three ordinary girls trying to navigate the turbulence of teenage life. Mimmi is headstrong and rebellious, introduced in Finnish director Alli Haapasalo’s sophomore feature, Girl Picture, brawling with another girl in the gym over unwillingness to care about the frivolous sport at hand. Rönkkö is Mimmi’s good-natured, curly-haired best friend; she struggles with intimacy issues, at ease with male attraction and sexual desire but unable to find pleasure in the act of sex itself. Meanwhile, competitive figure skater Emma forgoes adolescent delights for the sport she holds dear—until a reluctant party appearance puts Emma within Mimmi’s chaotic orbit. This throws the two girls into a whirlwind romance chronicled over the course of three Fridays and, alongside Rönkkö, all are pulled in different directions of passion, sexuality, and self-discovery.

Rönkkö has made it her mission to finally have pleasurable sex, agonizing to Mimmi at the mall smoothie stand (which they operate together) about how there must be something wrong with her. She loves men (a disappointment to the sexually fluid Mimmi) and can become aroused, but nevertheless finds the act of intercourse unenjoyable. Mimmi tries assuring her that it’s all right, that she’s still young—that she simply needs to guide partners towards what feels good. But that only leads to one such man accusing her of creating an unsexy, clinical sort of intimacy. Rönkkö is also, despite her insecurities, comfortably peculiar and crass, attempting to flirt with men using stories of sperm donations dispensed in Moomin mugs.

Emma and Mimmi, on the other hand, have no difficulty stimulating one another, falling ardently head over heels after Mimmi’s shaky first attempt at negging Emma while she ordered a smoothie, then bonding at the aforementioned house party. Of course, their courtship comes with its own share of snags. For one, Emma is torn between the tantalizing appeal of a normal teenage life while still being dependent upon her stringent figure-skating endeavors. Alternately, Mimmi struggles with feelings of abandonment from the mother she was once close to, who remarried and gave birth to Mimmi’s half-brother. This has left Mimmi under the unshakeable impression her mom was able to start her family anew and better. Eventually Mimmi suspects Emma—increasingly dismissive of strict figure-skating regimens as her relationship with Mimmi develops—is just using her to rebel against athletic pursuits.

Haapasalo’s film is a free-wheeling portrayal of (cis) feminine adolescence in its various complicated, unflattering incarnations: familial pains, burgeoning sexualities, finding balance between work and pleasure, all the while trying to figure out who the fuck you even are. As a girl I intimately know the score and often found Girl Picture warmly reflecting my own experiences. Watching a scene wherein Mimmi and Rönkkö glide around Mimmi’s bedroom to the beat of a pop song while preparing themselves for a high school party recalled my best friend and I fussing over our faces and outfits in the mirror of my childhood bedroom, probably to go to the mall or the house show of a shitty local band. But Mimmi and Rönkkö, two little oddball outsiders, have only been invited to this party as something of a jest. Yet Haapasalo does not dwell on the idiosyncrasies of the two girls who might elsewhere be positioned in a sort of competition between more popular students. This struck me and resonated in my memories of youth spent being a weirdo alongside my own weirdo best friend, unconcerned with and unbothered by notions of social status. Mimmi and Rönkkö are explicitly themselves, indifferent to the norms of a world that exists outside the relationship they’ve built between one another and their complementary personalities. Though much time is spent allowing them to detach and drift apart, their poles always draw them back. And despite one blow-up towards the end, their friendship remains the film’s chief constant.

Beyond Girl Picture’s careful exploration of sexual stimulation and queer intimacy, the script (co-penned between Ilona Ahti and Daniela Hakulinen) remains a largely unsurprising hodgepodge of teenagedom, never straying terribly far in narrative or character. One might say it’s entertaining and winsome enough to win hearts despite a string of particularly uninspired pop-music needle drops, bolstered by the impressive performances from all three lead actresses and Jarmo Kiuru’s gorgeous cinematography. Though this latter feature does perhaps render the messy life of a teenager too sleek and unblemished, acting in opposition to the rough edges Haapasalo attempts to expose. If not nearly as boundary-pushing as it could be—especially if one’s seen a good chunk of the already-existing teenage coming-of-age movies—Girl Picture is sweet, tender, and frequently amusing: a love letter to that time we ache to leave in the rearview mirror but which shapes who we are and how we love more than anything else.