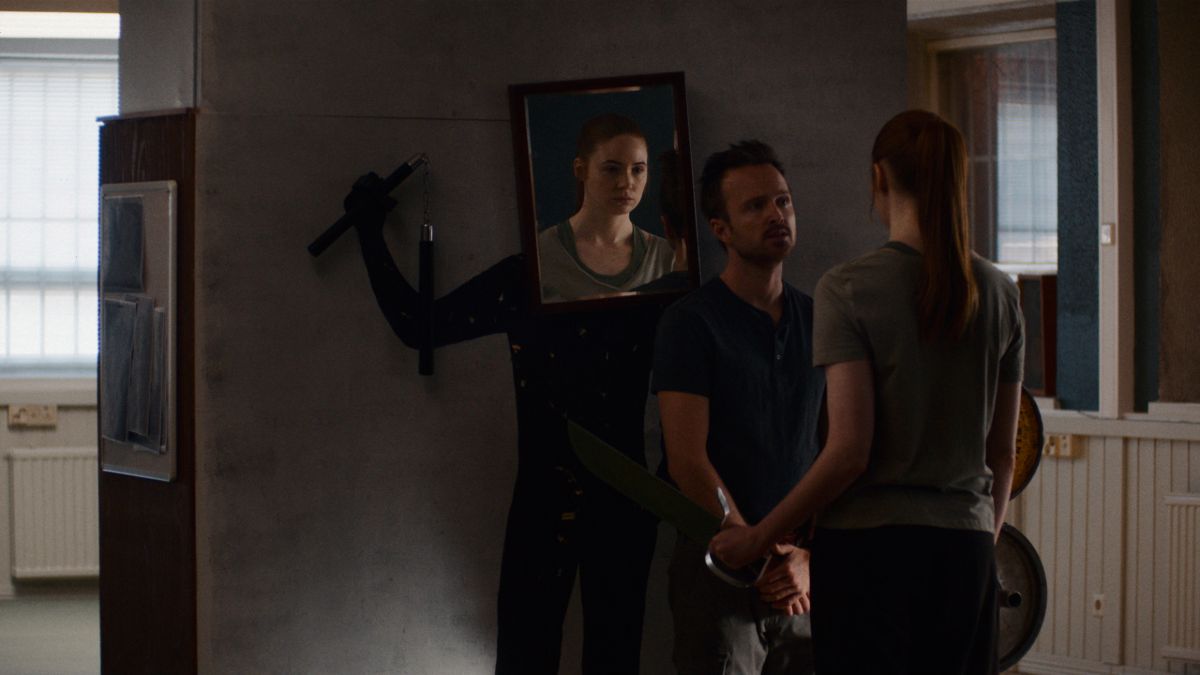 Dual, Riley Stearns’ third feature following Faults and The Art of Self-Defense, establishes its endgame within the first five minutes. Opening on a split football field with two small sets of audiences in its bleachers, the dark comedy watches as two young men, doppelgängers, fight to the death under lights and TV cameras usually set for a high school state championship game. The double wins, killing his original form, setting the table for the following 95-minute story.

Stearns, critically successful in his first two films, will likely find a more divisive audience with Dual, which bears an outstanding premise and mixed execution. Starring Karen Gillan as Sarah, this light sci-fi drama looks like the current world. Little has been altered; if anything the technology looks like it’s from the 1990s. The only difference seems to be a cloning procedure available to those that are dying—like Sarah, who opts to undergo a process that conveniently only takes one hour. A woman with a constantly traveling fiancé, Sarah’s loneliness rarely exists offscreen. It’s all-consuming.

Stearns’ entire cast give robotic, matter-of-fact performances, stating the dialogue as matters of record existing on a page. Reminiscent of the deadpan acting style present in Yorgos Lanthimos’ bleak comedies and dramas, Gillan talks about her impending death with rare signs of emotion, or even sadness, instead opting for pure resignation. Flashes of anger, frustration, and despair happen sparingly, three times of isolated incidents when her character is driving in the car, a place of comfort for many people in this world and the one Stearns has created.

Sarah’s plan looks to be working: the double ingratiates into her life by spending time with Sarah’s shallow fiancé and overbearing mother. But Sarah learns she isn’t dying, her illness having gone into a miraculous remission. There’s something to be said about the law that follows: both an original and a double cannot exist in the world. Only one can be “alive,” and thus they must participate in a duel to the death.

The story turns into a training montage, a fundamental changing of how Sarah looks at the world, a becoming of a new person. A pattern of self-defense becomes apparent in Stearns’s films, along with the idea of a transformation of his lead characters. In Dual Sarah learns to digest and then dole out violence—as a need, not a want. Her independence comes from this now-essential need to be able to kill a version of herself, and the meta nature of killing her past self isn’t lost on Stearns. The impact of this need never fully lands, though, pushing the film forward without having much of an emotional jolt.

Dual instead finds comedy and sweetness in its smaller moments—when Sarah teaches her trainer (Aaron Paul) how to dance hip-hop or visits her doctor for check-ups, learning that once she dies her double will take on the financial responsibility of the procedure. Societal jabs make up for most of these laughs, and Stearns lands his best joke towards the end in a department store, but these more-human minutes are outweighed by literal, overexplained dialogue, a stylistic choice that tires after its initial surprise.

Gillan, acting against herself, isn’t given a tremendous amount. Her eyes, often unflinching yet downcast, fill her performance—often restrained in movements—with a double-edged spirit. Paul complements her once introduced, and the two’s chemistry injects a relationship into an isolated narrative. Otherwise this cast turns thin; the other actors and their characters are unable to transcend an oft-unsentimental script and structure, fading into the background as Dual focuses on Sarah, her training, and the impending duel.

With Dual, Stearns continues his examination of human impulse. He looks at a collective desire to live—specifically as a unique being, someone able to transform and change and alter into something completely dissimilar. Though permeated with comedy, Dual latest sits in the melancholy of life: daily habits that lead to a lonely stagnation broken up by a new person, a new hobby, or a duel with your clone.