Sundance Review: And Then We Danced is an Empowering, Heart-Wrenching Drama 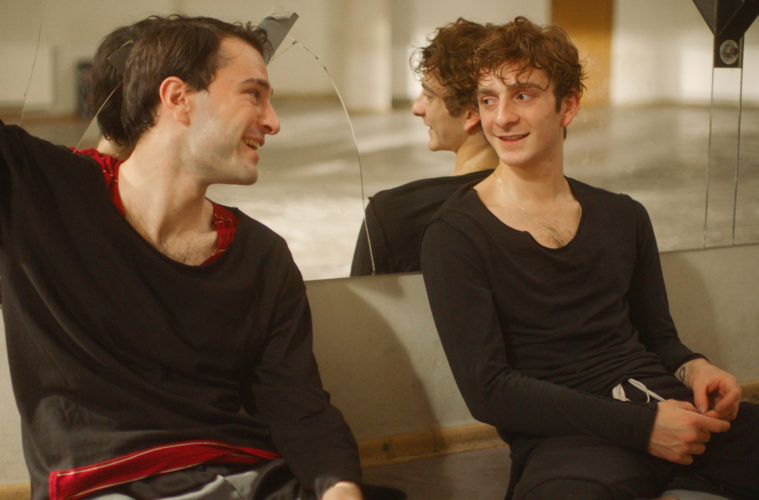 To be a Georgian male is to be masculine—especially in dance. Merab’s (Levan Gelbakhiani) teacher Aleko (Kakha Gogidze) demands that he stand straighter and stronger, a monument that can withstand any blow. While his country’s aesthetic had allowed for a softer tone, conservative tradition prevailed a half century ago to move things back to the rigid separation of gendered movement and the complete erasure of sexuality. How Aleko’s dancers perform becomes a visual metaphor for their nation. It will not be defeated. It will not show weakness. And anyone who dares to refuse giving one hundred percent to that goal can leave. It doesn’t matter how much passion Merab possesses or how many hours he practices. In their eyes he isn’t Georgian. He isn’t even a man.

It’s no wonder that writer/director Levan Akin’s film And Then We Danced was met by protests in Georgia. The only question is whether the establishment took issue with the work’s depiction of homosexuality or its scathing presentation of the country as an immovably oppressive force. Because it’s not enough that young Merab must confront his desires to discover the identity he’s involuntarily let lay dormant for decades inside. He must also combat the constant reminder that his feelings are “wrong.” He hears it from Aleko. He hears it from the television. He hears it from a priest overseeing wedding vows. Men are men and there can be no exceptions. They will put on their dresses, contort their bodies, and dance like men without a single shred of personality.

Why? Because their purpose is to live and dance for Georgia. They are its artistic dignitaries bringing its values abroad onto international stages. So it’s not about what the individual can do, but the message brought forth by their bodies. It’s therefore easy to overlook the obvious when everyone sees that which they’ve been conditioned to see. The awkward distance between Merab and his longtime partner (in dance and life) Mary (Ana Javakishvili) can thus be conveniently ignored as the product of youth or perhaps anxiety towards the pressure of escalating romance. What comparison point does Merab have to think anything different? What has he experienced as the son of divorced parents with a hoodlum brother (Giorgi Tsereteli’s David) to realize what he shares with Mary isn’t love?

That brings us to Tbilisi’s latest arrival: Irakli (Bachi Valishvili). The moment Merab sets eyes upon him brings about a change in his demeanor. Is it jealousy once the former takes his spot with a more masculine physicality? Is it anger? Or is it the embarrassment that comes from lust—a feeling he never had in all his years by Mary’s side. Merab can’t stop looking at Irakli and the instant this stranger begins to let him in as a friend earns a smile both genuine and infectious. A newfound energy arises in his performances when paired together. Merab even finds a new lease on life with an excitable demeanor of warmth and vigor that surprises his grandmother (Marika Gogichaishvili) considering she’s used to a pervasive sullenness instead.

What is to be done about it, though? With rumors swirling as to why a spot on the permanent dance company has opened for Merab to dream of stardom—namely that the former occupant was thrown out after an illicit homosexual affair was uncovered—he knows that which his heart wants comes at odds with that which his head does. What will win out? Will he toe the conservative line and dedicate everything to dance or will he embrace the joy and yearning that comes from being with Irakli? The answer is simple and yet it brings with it complex ramifications when life begins to get in the way. Love is only as strong as the pain its absence provides. And some responsibilities are too heavy to ignore.

Merab might not believe it right now, but he is very lucky in many ways. Akin has beautifully written this character as a young man with the freedom to follow his desires. Yes, he must work and study to survive while dancing, but he has the luxury to never think about how far he’d go to keep the electricity on at home thanks to David. Yes, he has to deal with the albatross that is a father and mother on hard times after being successful dancers themselves, but he’s lucky enough to not have to worry about sickness like Irakli and his ailing grandma and father. Merab has the space to think about nothing else but a return text from his love. He can listen to his heart.

And he does. Akin takes pains to show Merab’s attempts to fall in line during Aleko’s classes and be the rigid soldier of form that’s demanded of him as an artistic ambassador of his country because we need it as a juxtaposition to the unbridled motion under strobe lights enjoyed later on as inhibitions are thrown to the wind. And Then We Danced is a love story, but it’s not merely a sexual awakening. We’re watching as Merab is exposed to a world he’s been conditioned to ignore. He jumps into its rabbit hole with eyes opened wide to finally embrace an outlet that allows every part of his identity to breathe free without fear of reprimand. He’s wrestling dance away from the clutches of nationalism.

It won’t be easy with myriad sacrifices and plentiful sorrow, but he won’t be alone. Those who have looked after him in ways he never quite knew will remain by his side regardless because they know Georgia’s shortcomings and the reality that its needs don’t come before their own. The result is at once empowering (Merab realizing that his love for Irakli was a gift whether or not its reciprocation will endure), heart-wrenching (the final scene between Merab and David is unforgettable), and inspirational (the audition Merab has been working towards the entire film arrives as though a guttural scream announcing his presence as a man who will no longer compromise). He doesn’t need Georgia to be strong. And it will only weaken by pushing him away.

And Then We Danced screened at Sundance Film Festival and opens in limited release on February 7.