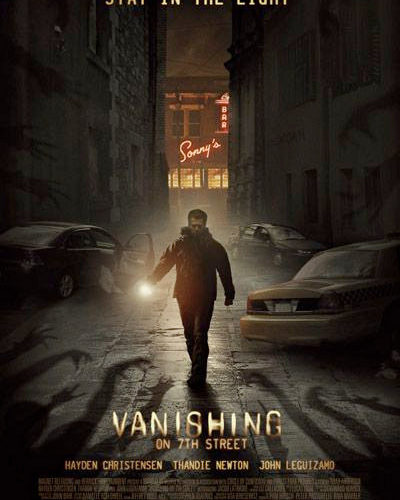 Brad Anderson is both a reliable and extremely competent filmmaker. He rarely hits a false note with having most of his films ranging from good to pure excellence; The Machinist, Session 9, Transsiberian and Happy Accidents. In those films Anderson displayed a true skill for tension. With his latest film, Vanishing on 7th Street, he once again proves his talents for crafting a memorably moody and tensioned atmosphere.

The film starts off wonderfully with a very well done set-up. The first fifteen minutes introduces our four leads right at the start of this possibly apocalyptic event: Luke (Hayden Christensen), Rosemary (Thandie Newton), Paul (John Leguizamo), and young James (Jacob Latimore). In the first few minutes, the blackout happens and the dark shadows attack. There’s no 20-minute introduction for all the characters, it kicks things off quickly. One knows everything they need to know about the leads and what’s happening with their intros.

While the premise sounds silly and like a possibly trashy Syfy channel movie, it’s not. Anderson’s horror tale could have been another run and chase failure like The Happening. Shyamalan’s tremendous mystery science theater-esque comedy is the perfect film to compare Vanishing on 7th Street to. Anderson gets nearly everything right that Shyamalan failed on. The tone is well handled. The performances aren’t laughable. There’s a genuine sense of danger. And, thankfully, there’s no tiresome exposition.

There is no explanation as to why this is happening. There’s a few hints here and there, mostly because of the religious undertones, but there’s never a character spelling out the facts as to why or how this happened. Even the “where” isn’t explained. Is this a global phenomenon? The film doesn’t say, and it shouldn’t. Everything we get to know are the things that the characters know: the rules of survival. This is a survival story first and foremost. While the opening promises something a little bit bigger in scope, the film is fairly small and well-contained. In fact, most of the second act takes place in a bar, where there’s some middling and very little plot movement. Those who are hoping for a film on a grand-scale level may be disappointed, but Vanishing still delivers on a visual level, despite its small budget. The shadows are creepy, and the sound design adds more to the fright of their menace.

As for the cast, the main four leads do a respectable job. Hayden Christensen, prepare to be shocked nerds (!), is believable and fairly good in the role of Luke. It’s somewhat of a perfect casting choice, since Luke is, in the simplest of terms, a whiny jerk. Christensen is obviously notorious for his annoyingly whiny Anakin, and here he does better work in that territory. I for one didn’t want to see Luke die a horribly painful death like I did with Anakin, he’s the most entertaining of the bunch.

He’s selfish, never does anything but complain, and is completely out for himself. Some may find him despicable, but there’s a certain amount of joy to be had to see how much lower he can go. [Spoiler Alert] Lule also poses a hilarious moral lesson by the end of the film, which finally solidifies him as the best character in the ensemble. For most of the film he only cares about himself, and he survives that way. By the end, when he does a genuinely kind act, he dies. It’s a fantastic moment seeing him die for trying to be helpful. How the third act treats the four leads makes the film even more worthwhile. [Spoiler Over]