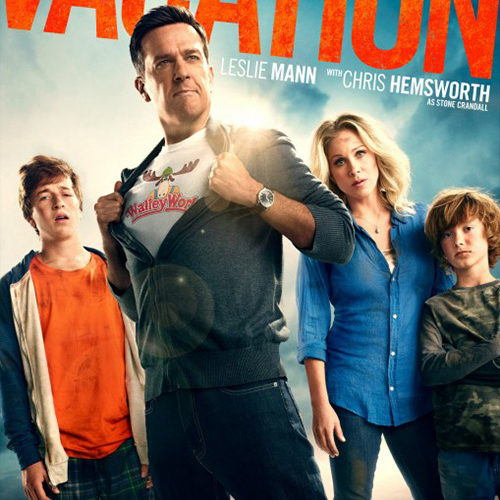 I smelled trouble as soon as Ed Helms was cast in Vacation as the now father-of-two Rusty Griswold. While the perfect surrogate for Chevy Chase‘s bumbling Clark in a remake of the original National Lampoon’s Vacation, he’s a far cry from the character he’s meant to play in this half reboot/half sequel. I made the mistake of rewatching that first entry into the Griswold’s saga to realize it — coupled with the equally fantastic Christmas Vacation — proves Rusty was always the one family member that had a level head. He was the smart aleck laughing as his father attempted to lie his way through the latest pratfall. He was the one filled to the brim with indifference and embarrassment towards the eccentric kooks biology forced upon him. Rusty’s position worked specifically because he wasn’t a spitting image of Dad. So what do John Francis Daley and Jonathan M. Goldstein do? They rewrite the entire mythology of these familiar figures to give us what they believe is a Griswold clan for the twenty-first century. One can imagine the studio most likely steering them in this direction for a remake without the guts to just create a remake. I’m sure their boardroom brainstorm session dealt with how to achieve the “best of both worlds.” Why anger audiences by fiddling with a classic when they can slap the label “sequel” on and think we’ll all be fooled? This was a grave error because they not only piss off lovers of canon continuity; they also piss off fans of good comedy by replacing John Hughes’ heartfelt nostalgia with never-ending sex jokes.

Ripping the soul out of Hughes’ franchise, we have prosthetic penises, over-stayed misinterpretations of lingo such as a rim job, and an extended scene of adolescents dunking their heads in a pool of raw sewage. It’s a film built upon dry humor and subtle gags offering a lowest common denominator display of idiocy a la the pair’s disappointing Horrible Bosses and stale Burt Wonderstone. Even Clark and Ellen (Beverly D’Angelo) prove shadows of themselves in the tiniest cameo possible to justify whatever compensation was earmarked for them.

Remember the brilliance of the Wagon Queen Family Truckster? How we understood its absurdity by sight and basked in the glory of Chase’s Clark playing hardball before spouting the same rhetoric to his wife that Eugene Levy‘s salesman gave him? The joke was Clark’s 180-degree switch because the punch line hinged on the pitch’s repetition, not the car. First-time directors Daley and Goldstein either missed this truth or didn’t care because their “homage” is Helms’ Rusty purposefully surprising the family with his freak show of a Walley World-ready mini-van (the Albanian “Tartan Prancer”) before proceeding to explain every eyesore feature as though on a checklist for the blind. Way to pat yourselves on the back for one-upping the original’s vehicle design, guys. I’m glad you took the time to drive each “chuckle” down our ignorant throats.

The whole movie is like this. Every idea paying tribute to its predecessor is eventually ruined by execution or being run into the ground by sheer lack of substance besides the callback. I was pleasantly surprised in the way they projected some Clark moments onto Rusty’s son James (Skyler Gisondo) rather than placing them all on Helms’ shoulders, but the filmmakers couldn’t help winking again. Giving James the dream girl via teenage Adena (Catherine Missal) waving at him from another car on the road and subsequently popping up throughout the film was their best decision to freshen up old ideas. There’s no need to also add a new Ferrari girl (Hannah Davis) for Dad. And don’t even get me started on hers or Charlie Day‘s rafting guide’s demise. The obvious relish in such senseless malice is disturbing. 1983’s Vacation and 1989’s Christmas Vacation are timeless because I could see my ragtag nuclear family in them then and now. They touched upon resonate universality first and layered jokes above it. There wasn’t one instance during this new iteration that spoke to me in any meaningful way. I wasn’t watching myself through these characters; I was seeing everything that’s wrong with today’s comedy. Rather than tap into public consciousness, these writers seek to shock by turning caricature and stereotype into grotesque distortions resembling nothing I’ve ever seen in reality. Rusty and the gang aren’t bumbling, sympathetic everymen; they’re simpletons devoid of merit much like the humor. Including Leslie Mann‘s Audrey only to beg for a career identity and constantly get shot down by pretty boy chauvinist husband Stone (Chris Hemsworth) isn’t funny. It’s tragic.

There were three things I genuinely chuckled at: two high concept scenes of chaotic action devoid of dialogue (a slow-motion whitewater horror show and the climatic brawl) and one inspired GPS gag carrying on throughout the locale captions. I also enjoyed Steele Stebbins‘ Kevin Griswold because I find the younger brother as bully a fun change-of-pace and kids swearing like sailors crudely appealing—this humor isn’t completely lost on me. These were the scarce moments Vacation felt natural, completely unlike when matriarch Debbie (Christina Applegate) pukes her guts out to relive her sorority days and force-feed even more of the gross-out flavor we’ve become numb towards a decade ago. This series endured because it never relied on bodily fluids for entertainment. Hughes instilled honesty to tickle our funny bones. Daley and Goldstein throw feces and laugh amongst themselves.