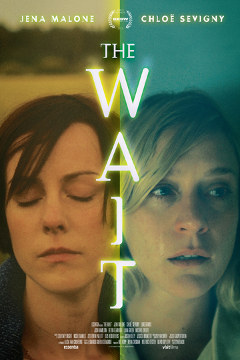 Actor-turned-filmmaker M. Blash has shown a penchant for subdued, character-driven indies – in the past, he took small roles in Kelly Reichart’s road movie Wendy and Lucy, and Gus Van Sant’s angsty crime piece Paranoid Park. Seven years after his directorial debut, the low budget, all-female drama Lying, he continues his devotion to this style of film with The Wait, a mystical exploration of grief and finding life after death.

Based on his own screenplay, Blash’s sophomore effort opens on Emma (Chloe Sevigny) and Angela (Jena Malone), two sisters mourning the loss of their mother just a short time after her passing. Emma then receives a mysterious phone call, its cryptic message convincing her that, in a few days, her mother will rise again. As expected, Angela reacts to the news with skepticism, as does their much younger brother, Ian (Devon Gearhart), who, like any emotionally closed off teen boy, goes out of his way to avoid the awkward situation. Despite her family’s doubts, Emma preserves the corpse in a closed off room and prepares for its resurrection, even as an encroaching wild fire threatens to destroy the area. The scenario provides an opportunity to explore how individuals deal with loss, each sibling representing a different stage of the grieving process. Emma bargains for her mother’s life through a series of rituals, including a morbid welcome back party that her sensitive kid daughter, Karen (Lana Elizabeth Green), helps her plan. Unable to cope with what they view as their sister’s unraveling mental state, Angela and Ian find comfort elsewhere – for Angela, it’s in the arms of a handsome history student named Ben (Luke Grimes of True Blood), while Ian prefers to deny the tragedy altogether by informing friends and strangers that his mother is still alive. These interactions illustrate the trio’s’ unwillingness to find closure and move on, which begins to make sense once their backgrounds unfold. When, out of the blue, Angela angry dials an ex-boyfriend, it becomes clear that her mother’s death isn’t the only trauma that she refuses to confront.

Visually, Blash does a excellent job portraying the character’s quiet desperation, even if the symbolism sometimes verges on the obvious. Filmed in Oregon’s picturesque wilderness, the tranquil environment serves an aesthetic purpose, as well as a reflection of the family’s emotional suppression. Thankfully, cinematographer Kasper Tuxen takes full advantage of the region’s beautiful landscapes, which results in some truly breathtaking images; at one point, Ian watches as a firefighter plane paints a red streak (a mix of magnesium, water, and iron oxide) across a pristine blue sky, its brilliant brushstroke clashing with a cloud of dark ominous smoke the background. The shot’s haunting serenity perfectly conveys the feeling that just beyond the calm, turmoil edges ever closer.

Gorgeous and intoxicating as it is, the scenery often overshadows what little action the film has to offer. Malone and Sevigny – who also appeared together in Blash’s first outing – deliver equally drowsy performances, with Sevigny coming out ahead by playing Emma with a pleasantly mad determination. At times, the characters’ despondence, coupled with the isolation of their surroundings, makes it seem as though they’re actually ghosts on the fringes of reality, hesitant to return to the living world. Despite its teasing magical aura, however, the film ultimately falters in the third act as it winds down to a confusing and unrewarding climax.

The Wait is now in limited release.