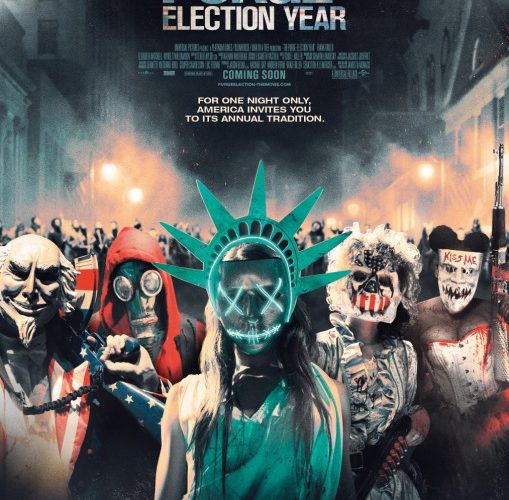 The escalation of terror has dialed up a few more notches as writer/director James DeMonaco takes us further down the hole of first world genocide in The Purge: Election Year. What began behind fortified walls and a false sense of modest superiority to show how no one was safe when bloodlust, greed, and jealousy ruled mankind soon entered the outdoors to find the government blatantly enforcing its own thinly veiled mantra of “kill the poor” when the public stopped doing it for them. The only ones truly protected were these New Founding Fathers (NFFA) and all their friends possessing Level 10 clearance and above. Purge Night allowed murder and whatever else, but America’s new leaders would be spared since this grand gift was theirs. Until now. This is the main point of evolution for what could serve as a perfect trilogy capper if the box office doesn’t somehow provide enough incentive to keep this gravy train moving. For the first time since the Purge Night holiday was created, someone has a chance to take the establishment down. Her name is Senator Charlie Roan (Elizabeth Mitchell), a former victim herself and the lone survivor from her family one fateful evening eight years ago. Now she is running for president on the Independent ballot and the people have opened their eyes wide enough to see they need her. The one-percent will always be the minority despite their attempts to cull the fat, so the masses’ opportunity to fight back with their vote is now.

When it comes to taking Roan out, NFFA leader Caleb Warrens (Raymond J. Barry) tells his cronies, “By any means necessary.” This is why the Level 10 rule is revoked. It leaves them vulnerable, but surviving this long allows preparations for drastic measures. The fact it also gives them the power to assassinate their competition means it’s more than worth the risk. If only they peered closer at her security team to see who was by her side with guns drawn they’d know planning this particular murder would need expert precision. Not only is the Sergeant (Frank Grillo) a trained operative, he survived a Purge ten years previously in what was DeMonaco’s The Purge: Anarchy. Now he has a personal and professional stake in shutting it all down.

Let the sirens blare and the killing commence just as before and for possibly the last time. Don’t think the timing of the third installment wasn’t purposeful because that extra year gap between parts two and three cannot be a coincidence when comparing the subtitle to today’s America. We’re in the midst of elections ourselves, a divisive battle some would say could lead us to a police state not unlike the one DeMonaco depicts. With a cold, calculating “evil” on one side opposite a brashly obnoxious bigot on the other, our choice is impossible and yet ever so important. We’re bracing for a fall that hopefully sees someone like Senator Roan rise from the ashes. We can only pray it occurs sooner than Election Year‘s setting of 2033. This entry seeks to combine pieces from its predecessors to create a whole new beast with as much visceral incentive to vote with our brains as possible. It starts with three points of fortification (Roan and Sergeant holed up in her newly-secured home; Mykelti Williamson‘s convenience store owner Joe and his employee Marcos played by Joseph Julian Soria staying behind to protect the shop after losing their insurance; and Betty Gabriel‘s reformed criminal Lana riding the streets in a triage van to help anyone caught in the crossfire) and soon disintegrates into the wild west of Washington DC. No one and nothing is safe, the only hope for survival coming from friends you can trust will have your back. And let’s not kid ourselves: civil war has commenced.

DeMonaco is having fun this time around by injecting as much carnage as possible. Election Year therefore becomes the most graphically over-the-top of the series with a new depraved purging example on every corner to a creepily singing woman sitting over a burning man to a hoard of foreigners vacationing with the singular goal of wreaking havoc “the American way.” It makes sense, though, when you think about the timeline. We’re eleven years removed from the Sandins’ nightmare and the factions in play have evolved and bolstered their ranks. Bishop (Edwin Hodge, the only actor to have been in all three films) is now in control of Carmelo Johns’ revolt and will stop at nothing to ensure the Purge’s dismantling. It’s an all-out assault for twelve unregulated hours.

This goes for everyone as the government enlists mercenaries (led by a menacing Terry Serpico) to take over where their own troops in trucks failed and the purgers become more brazen in their sadistic ways (Brittany Mirabile‘s school girl turned homicidal bride isn’t fooling around). The NFFA is rendered evangelically religious to satirize the Republican right’s misguided spiritual entitlement with a minister as their candidate for president (Kyle Secor) and we can’t help laugh at the sheer madness such inspiration delivers. The world is unhinged with only the common man able to keep his/her head in its broken system. Williamson, Soria, and Gabriel are nobodies, regular folk looking to scrape by and survive. Yet somehow they answer the call to be heroes, damn the consequences. So while the violence and perversion quota has been increased exponentially, so too has the American way — the real American way. The simple fact there are secret triage units scouring the city to help while the government shuts down legitimate emergency responders shows the power of mankind’s empathetic strength alone. The politics are no longer in the background pulling the strings; they are front and center, good and evil. And just like the NFFA pats itself on the back for “not being hypocrites,” it’s time to fear our own establishment won’t be either. They praise the Purge and relish in killing to prove its efficacy. Most elections have voters wondering which platforms their candidate will forget after victory, but 2016 has us afraid of which they won’t.

DeMonaco has his finger on the pulse of our struggle and has found a way to put it onscreen as all good horror does. Sure he and Jason Blum are making money, but you cannot deny they aren’t also forcing us to acknowledge the social science at play. This installment is about the revolution — not the rich and poor or the white and black. This is about right and wrong. It’s about literally pushing aside material wealth and gain for a symbol of freedom whether that be Bishop’s underground militia or Senator Roan’s refusal to back down, both examples fully aware that they might have to die in order to win. The first two films were about survival, staying on the defense. Get ready to finally fight back.