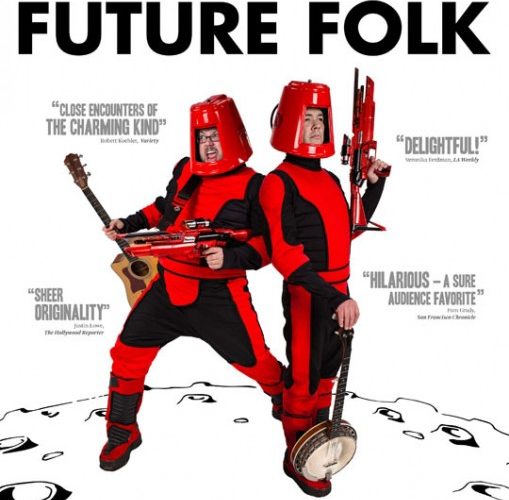 [Review] The History of Future Folk

Hipster culture appears here to stay. Big-bearded, plaid flannel-wearing, folk music playing bohemians increase their numbers every day as bands like Fleet Foxes, Bon Iver, and Iron & Wine expand into the mainstream rock scene. The appeal probably comes from our American love of wanting to be unique by adopting trends that have become anything but. Yearning to be a part of something without wanting to admit it, we fight against uniformity until the counter-culture morphs into the newest style to loathe. Somehow the phenomenon known as hipsterism refuses to die despite such rampantly vehement displeasure. I too love ragging on the skinny-jeans/thick, black-rimmed glasses movement—laughing as “mountain men” mystique takes over the nation—but I can’t escape the music. Indie, alt-folk radio is simply too good to ignore. It’s not just me either. Hipster outfits like The Black Keys and Mumford & Sons were Grammy nominees this year, ruling the charts and playing the type of retro, “have I heard this before?” songs my parents even ask to borrow. Their sound resonates beyond age, gender, and taste, literally bursting through the atmosphere into space. Well, at least as far as giving an alien conqueror pause before unleashing a deadly virus on humanity and repopulating Earth with survivors of his soon-to-be-decimated-by-a-comet planet Hondo. If not for the elevator music piped through a department store’s speakers one fateful Brooklyn evening to win over General Bill Trius’ (Nils d’Aulaire) heart, none of us would be alive right now. Who knew a place other than the hell dimension of Pylea was unfamiliar with the concepts of melody?

This is the crux of John Mitchell and Jeremy Kipp Walker’s science fiction musical comedy The History of Future Folk. Opening eleven years after General Trius landed with strict orders to infect Earth, he has seamlessly assimilated into our culture to become a family man with wife (Julie Ann Emery’s Holly) and daughter (Onata Aprile’s Wren). Working as a groundskeeper at the Reckson Center (inside the Cradle of Aviation Museum) to be close to a now defunct nuclear missile that was active during the Cold War, Bill tirelessly strives to calculate a way to blow up the comet threatening his planet. With a makeshift command station he prays is powerful enough to contact Hondo and tell them not to send an actual invasion party, hope for the continued existence of both worlds may still exist. But everything changes when Hondo sends Kevin (Jay Klaitz) to uncover the fate of its fearless general, crash landing with orders to immobilize Bill with his laser gun and force him to give up the virus’ location. A bit of a bumbling mess, it only takes one mistake before Trius gets the jump on him instead. Now bound and gagged in the garage, Kevin is greeted by a scream once Wren stumbles upon him in the dark. Recognizing the black and red jumpsuit with bucket helmet ensemble from her father’s bedtime stories, the girl innocently says “Hello” in their native language while Holly calls the police. Bill—unable to speak his implausible truth with the authorities involved—now must expose Kevin to the glory of music and expedite his heroic plans to launch the missile.

Overflowing with quirkiness, The History of Future Folk continues along its path of absurdity to delight and entertain audiences. We watch as Kevin’s lusting over a human policewoman (April L. Hernandez’s Carmen) throws the duo in jail, discover that General Trius possesses supernatural powers for escape, and blindly accept the fact Hondonians are able to effortlessly learn things like playing the guitar and speaking Spanish through sheer willpower alone. Bill and Kevin unwittingly become the unlikely team two worlds must count on for survival and yet they spend most of their time playing songs referencing their home while establishing a multiplying fan base quick to cut holes in red plastic buckets in order to show their love and appreciation for the band they’ve come to hear. Doubling as an origin tale for the titular band—yes, you can buy Future Folk’s debut album Vol. 1 from iTunes and Amazon—a la Tenacious D in The Pick of Destiny or Flight of the Conchords, there are multiple performances at Larry’s (Twisted Sister’s Dee Snider) intimate rock venue to go along with visits from reptilian-esque alien bounty hunters. Full of romance, laughable action, and a wealth of comedy spanning dry one-liners to the karate chopping of old women, Mitchell and Walker have brought hipster cinema into the sci-fi genre. More cutely quaint than inventively original, this film has all the markings of a cult hit for college kids looking to view something off the beaten path. Just like the new garage rock playing on the radio, it’s a familiar premise repackaged for contemporary consumption.

While containing a much higher and polished production value than I admittedly expected, the real success lies in real life bandmates d’Aulaire and Klaitz’s performances. With only a couple short film composer credits to his name, the former’s lack of experience never overshadows his work courtesy of Bill’s stoic demeanor. There are glimpses of warmth when opposite Aprile and a brilliantly subtle sense of humor talking to fans from stage, but this alien general is otherwise all business. Klaitz on the other hand does his best Dan Fogler shtick to infuse more uproarious laughs. Possessed with a childlike innocence and wonder, you can’t help finding him utterly endearing. They are likeable stars in a low budget, high concept movie that doesn’t try too hard and that’s good enough for me.

The History of Future Folk opens in limited release on Friday, May 31st and hits VOD courtesy of FilmBuff on June 4th.