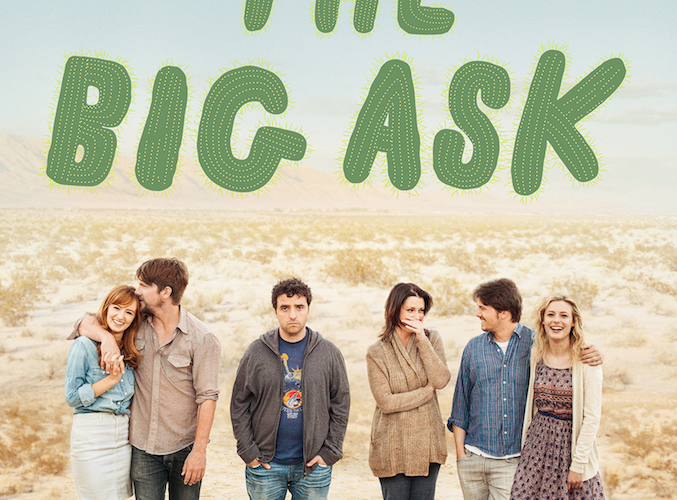 At the risk of sounding like a critic full of zingers, The Big Ask requires just that of the audience: a suspension of disbelief. The problem is we’ve seen this all before and then some; to call this trite would be an understatement. In fact, it embraces tropes commonly seen in this genre of contained, character-driven indie filmmaking. Another problem is how little I actually cared about each and every one of these characters despite the talent on screen; Thomas Beatty’s screenplay is as dull as the film’s direction.

David Krumholtz plays Andrew, who recently lost his mother to cancer; he’s married to Hannah (Melanie Lynskey), who does her best at comforting Andrew until she reaches her limit late in the second act. Andrew and Hannah assemble their friends, heading to a cabin in the middle of the desert for what should be rest and relaxation — that is, until that big ask that the title promises arrives at the point in the story prescribed by screenwriting guru Syd Field. Requiring an “injection of love,” Andrew proposes they should all have sex with each other before clarifying he’d prefer just to just have a four-some with the women. Initially the men resist while Emily (Gillian Jacobs) is intrigued, asking her boyfriend Owen (Jason Ritter) about Andrew’s penis size. For the other couple on this retreat, Zoe (Ahna O’Reily) and Dave (Zachary Knighton), they are less open-minded. Of course, Dave plans to ask Zoe to marry him. Parents have become a recent trope of independent cinema, but here it’s in a film that’s virtually about nothing with wafer-thin characters and supporting performers that serve little-to-no purpose except to distract. They include Ned Beatty and his dog, as well as a crazy lady.

The Big Ask is, as I stated upfront, just that. Opening with the standard scenes you’d expect, including a dinner at the retreat where the characters utter some on-the-nose dialogue during the toast, before we get our “inciting incident” to take it back to Syd Field. My hope for this film was diminished quite early on; sadly, it continues and doesn’t get much better.

Here’s a film that unfortunately proves Manohla Dargis right. Indie filmmakers with nothing to say shouldn’t be making films. It simply clogs up the market for the good ideas (even if these kinds of indies are saving the Quad Cinema and Cinema Village from closure). Like Awful Nice earlier this year, the trope of twenty/thirty-somethings retreating to an isolated location to discover themselves after the death of a family member is tiresome, unless the family is carrying vintage Atom Egoyan-esque baggage.

The Big Ask is now available on VOD.