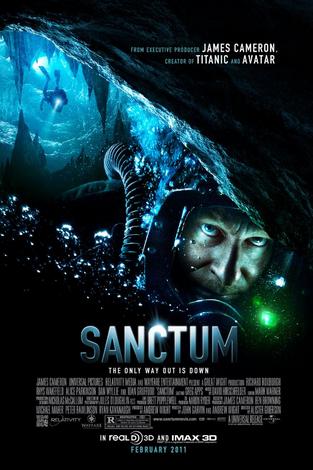 Sanctum, directed by Alister Grierson, is a 3-D effects slide show that wants desperately to be a feature film. Set in an underwater cave that no human has ever seen the other side of, the stakes skyrocket once a hurricane traps our small group of adventurers in this unexplored darkness.

Unfortunately, the script (written by John Garvin and Andrew Wright) and the acting isn’t quite up to par with the blockbuster-ready storyline. What’s more, the digital look of it all strips away the gloss of film stock, something that can make grand adventures like Lawrence of Arabia or The Abyss feel like something other-worldly put right in front of your eyes. Sanctum looks too real for a story so preposterous.

But then all of this is done in the name of good 3-D, and, to that effect, the film is a success. Boasting layer upon layer of depth, Grierson’s special effects team is in top form here, doing what they do best.

Unfortunately, stale one-liners remain stale one-liners and cardboard performances cannot be saved by the best 3-D in the world. Richard Roxburgh (who seems destined to live his life playing second fiddle to Sean Bean) saves most scenes he’s in and, luckily, he’s in a lot of them. That said, his son in the film, played by Rhys Wakefield, is the only actor with more screen time than Roxburgh and gives what might be the worst performance in the film. His trembling mannerisms and Peter Pan-like adolescence don’t help a character that’s meant to grow up through the course of 2 hours.

Not surprisingly, one can’t help watching the film and think that this is something James Cameron (who produced the film) would’ve loved to have done, had he had the time. He, of course, didn’t have the time and it shows. There’s gore in spots so gruesome it feels like a horror movie and scenes of reflection so “deep” it feels like a Oxygen daytime drama. And even though it appears to find its stride about two-thirds into its running time, moving at a breakneck pace with an even smaller cast and far less talking, it is too little, way too late.

If this is what must be sacrificed for good 3-D, they can keep it.