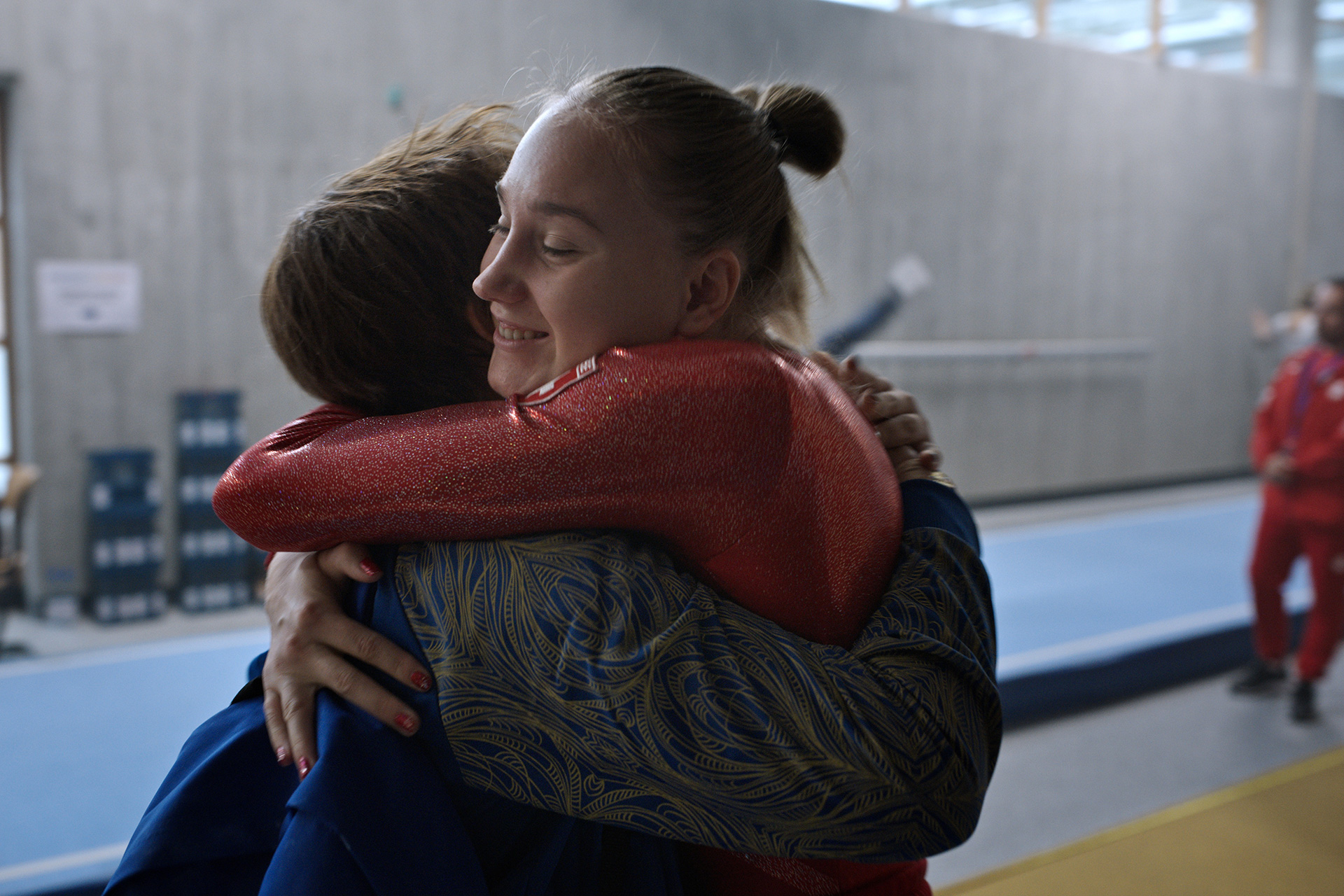 Director Elie Grappe and co-writer Raphaëlle Desplechin waste no time showing their gymnast drama Olga is about more than the parallel bars. They introduce 15-year-old Ukrainian Olga (Anastasiia Budiashkina) perfecting the maneuvers necessary to advance onto the Jaeger technique—a move she hopes will help the team medal at the forthcoming European championships. She and best friend Sasha (Sabrina Rubtsova) are having fun as the nation’s top two athletes in the sport, their confidence so high that Olga doesn’t even really mind the fact her mother (Tanya Mikhina’s Ilona Budishkina) is going to miss another tournament because of work. The reason is simple: Mom’s online journalism has never been as important as it is right now. Important enough to narrowly avoid being intentionally run off the road.

It jolts us from the comparatively small-scale intrigue of a gymnastics tournament. Rather than train with Sasha in Kyiv, Olga finds herself in Switzerland with family she’s only ever met twice before. Because her late father was Swiss, however, she’s allowed to find sanctuary as Ilona continues fighting against President Yanukovych back home. As the Euro-Maidan Revolution of 2014 ignites (Ukraine coming together across political lines to oust their Russian-sympathizing leader upon refusing to sign a treaty with the EU), Olga suddenly finds herself in a foreign country with a team of strangers. It’s the only way she can safely compete. Renounce her Ukrainian citizenship, join the Swiss team, and hope for the best. Her identity has never been more in-flux.

Both Budiashkina and Rubtsova are reserves on the Ukrainian national squad; the actors playing Olga’s Swiss teammates Steffi (Caterina Barloggio) and Zoé (Théa Brogli) are members of their nation’s real team. Grappe intentionally cast these elite gymnasts to help capture “the truth” of what these women do. She talks about the training and practice footage practically being documentary as she merely filmed them doing what their coaches asked. By bringing the actors in to relate their experiences and inform dialogue and action, Grappe was also able to blur the line between fact and fiction—much as she does with footage of the revolution being authentic firsthand accounts taken on cell phones from the ground. It’s all the more potent with what’s happening in Ukraine today.

This is a political film. If Olga’s pursuit of her Olympic dream is often narratively truncated, what it means to be in Switzerland while loved ones remain in Kyiv, risking their lives at the protests, isn’t. Watching her get into a heated fight with Steffi is about more than competitiveness or jealousy. It’s about a young woman dealing with the fact her mom might not survive the night. Olga tries to push it away and focus on the at-hand task, becoming the “robot” some other girls label her—it’s the only way she can get through the day. With her father’s family ignorantly speaking on things they don’t understand and her old coach defecting to Russia, a whirlwind of emotional and psychological frustration takes hold.

Perfect the Jaeger. Practice her French. Make friends. Check her phone. Listen to Mom and Sasha talk about the fight’s importance while being unable to join it herself. It’s enough to make anyone explode, let alone a teenager who’s never been away from home. Olga didn’t think twice about becoming a Swiss citizen, initially because it was necessary to compete. In that moment, when leaving Kyiv was merely a precaution, gymnastics remained her sole focus. It was her whole life. As the days progress and the violence intensifies, though, she starts wondering what it means with fresh context. Has she forsaken her home? Is the sport equal to her people’s freedom? Is she a child playing pretend as Sasha leverages everything in pursuit of her political goals?

Olga is literally killing herself while straddling this line between athlete and activist, compartmentalizing every aspect of her existence to reach a goal that is rapidly losing its value in her mind. That’s the struggle of excellence. When you’re as good as Olga is at gymnastics, you become placed on a pedestal outside the citizenry. You’re a hero whose accolades are supposed to be enough. You’re an inspiration representing a nation in turmoil. So to step down and renounce that status isn’t easy. What would her attempts to do so bring? Mom will forbid her from coming back. Her coaches will sell her on staying. The governments behind both halves of her genetic make-up will question where she belongs. She must force their hands.

This leads to a series of climactic events filtered through the dual prism of who she was and who she’s become. The tournament asks her to choose between taking a stand for Ukraine or performing for Switzerland. Her mother and Sasha’s fate ask that she choose to follow her path towards the Olympics or return home and join the struggle. Budiashkina potently portrays this internal war, her character’s rage and helplessness threatening to pull her underwater and refuse to let her up for air. To breathe in one world is to ignore the other and that’s no longer tenable. It’s no longer just about being able to compete; it’s now about living without oppression. What’s the point of winning gold if her country ceases to exist?

Olga is now in limited release and continues its expansion into Los Angeles on July 8.