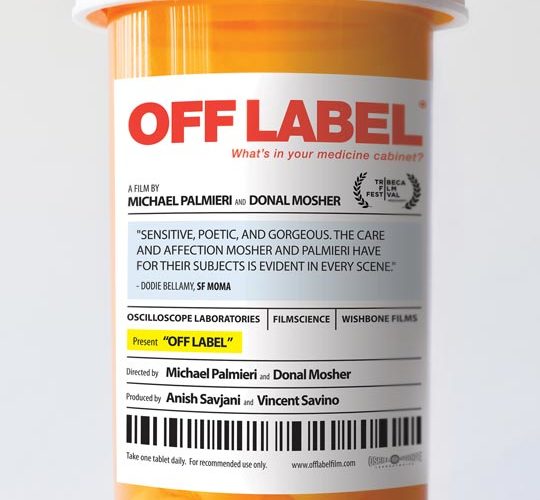 Diving into the challenging subject of “off label” drug use, Off Label examines a distinctively American epidemic  — as Bill Maher joked about Michael Jackson “single payer health care will probably not cover the doctor who puts you in a coma every night to go to sleep.” This system relies on human test subjects (some of which do this is a career to avoid having a career), or in the case of Paul Clough to fund a gambling addiction). Had this been directed by Morgan Spurlock, the film, while in Austin, would have stopped to interview Robert Rodriguez who famously funded El Mariachi via a one month drug trial.

Directors Michael Palmieri and Donal Mosher take a serious, critical approach, starting with Clough and moving to Robert Helms, who blogs about his experience from Philadelphia. There are others who have shared the experience that are otherwise voiceless; this film provides them with a voice, including Mary Weiss, whose mentally ill son Dan Markingson had unwittingly became a test subject for a psychiatric drug leading to his violent suicide and former prisoner Jusef Anthony. Anthony, incinerated at Holmesburg Prison for selling pot at age 20, was enrolled in a series of dangerous product tests initiated by UPENN dermatologist Albert Klingman. Klingman is a subject worthy of a documentary of his own, later testing psychoactive drugs at Holmesburg for the Department of Defense, he was brought up on violations of the Nuremberg Code. Off Label is an alarming study of an eco-system driven by profit, where symptoms are “managed” verses cured, all fueled by perverse incentives. Covering more personal ground than Steven Soderbergh’s thriller Side Effects, Off Label also features a fascinating segment explaining just how reps shape the opinions (I mean, “influence the market”) of doctors to use drugs for purposes other than originally intended.

Running a brisk, and often difficult to watch, 76 minutes, Off Label doesn’t offer up easy solutions nor is it a direct call to action. As some of the best documentaries do, it offers personal appeals from those caught in the system exposing unethical shortcuts taken at prestigious institutions such as UPenn, Mayo Clinic and University of Minnesota.

The film makes personal cases, most which are often difficult to argue with, from a soldier battling PTSD to a middle-aged married couple dealing with a cocktail of depression pills, each patching one problem created by another pill. Although more personal than political (as it dives into the lives each of the story’s narrators in its second half) the film is a classic political study. Those with money and influence will continue to create markets and fight regulation, thus potentially enslaving verses curing the most governable.

Off Label is a bleak, important wake-up call, giving voice to those that have been to hell and back. Big Pharma may spin or debunk it, they may say it’s a few bad doctors, but it’s hard to argue with someone directly recounting their direct experience with a system in which they have little power.

Off Label is now playing in New York and Los Angeles.