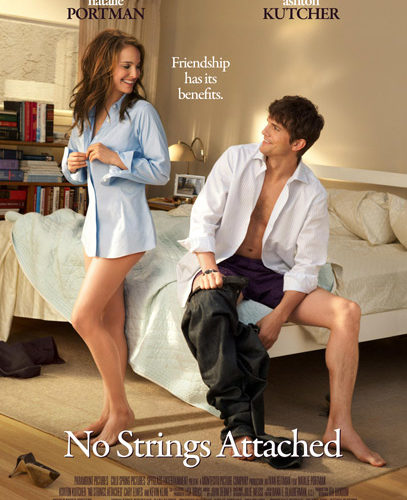 No Strings Attached starts off with our two leads as kids at a summer camp. This first scene ends with a bold question asked by the young boy, who’ll grow up to become Ashton Kutcher, of the young, spunky girl who’ll grow up to be Natalie Portman. It’s unexpected, rude and funny.

What immediately follows is more of the same, and most if works really well, until it all runs out of steam. Directed by Ivan Reitman, who wades comfortably into rated-R territory after years relegated to the PG-13 kiddie pool, this rom-com poses a question When Harry Met Sally… asked over two decades ago, only with more sex jokes.

Kutcher and Portman have plenty enough chemistry to work through the tired conversations about the physical versus the emotional in relationships, and screenwriter Elizabeth Meriwether peppers her script with original takes on conventional plodding to elicit more laughter than usual from this tired formula. In one particularly clever scene, Kutcher’s Adam makes Portman’s Emma a “Period Mix,” full of double entendre-titled songs meant to help her cope with that time of the month.

And then, like an alarm, a slew of scenes rattle off that first jump the shark of crudeness for crudeness’ sake before weaving into the familiar thread of romantic comedy. Sadly, Adam’s father, played by the uber-talented Kevin Kline, is much to blame for this change. His character goes from semi-satirical Hollywood bite to all-out caricature without so much as a beat. His dopey girlfriend (Ophelia Lovibond) doesn’t help either. Mash that together with a late-night scene in which Emma gets drunk and invades a threesome Adam’s trying to get off the ground and we feel like we’re watching a completely different movie.

After this, perhaps it would have been smart to push forward, going wilder and wilder, embracing the ridiculousness of these little subplots. Instead, Reitman and Meriwether recoil, as does the dialogue. Jokes get longer and less funny and the drama becomes the center and nowhere near as original as the comedy that populated the first 45 minutes.

Jake M. Johnson and Chris ‘Ludacris’ Bridges have a few choice moments as Adam’s wise-cracking best friends (truthfully, where would this sub-genre be without these types of characters?), until they too become inside jokes. Johnson’s got two gay dads and Ludacris has a one-liner. By the third act, that’s all these people are to us: punchlines.

It’s not lazy so much as it is safe. The film jumps through familiar hoops just at the moment it shouldn’t. Still, No String Attached is enough to slow the rapid death of a once-revered type of film and keep alive the hope that Mr. Reitman the senior has at least one more great comedy left in him. At least for now.