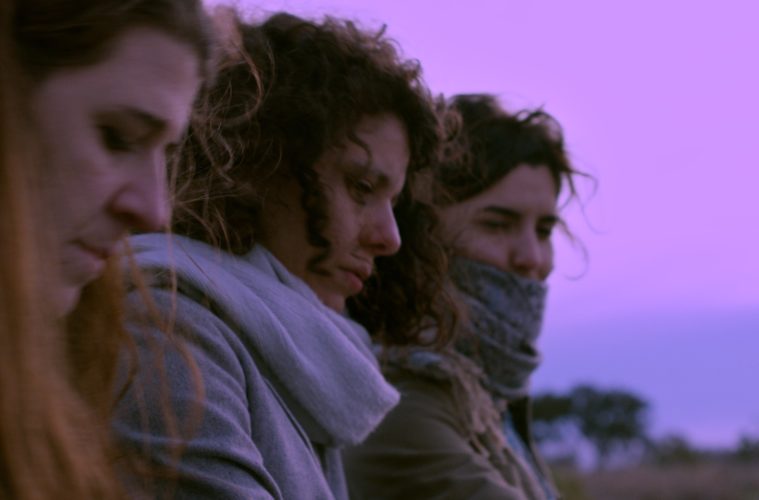 Women from Shakespeare’s oeuvre find themselves reincarnated in modern-day South America through the recent works of Argentine director Matías Piñeiro (Hermia & Helena, The Princess of France, Viola), which operate with non-linear structures concentrated on the intersection between the professional and intimate lives of actresses or aspiring artists.

From one shot to the next, Mariel (María Villar), a teacher and thespian who’s been down on her luck for some time, goes from being noticeably pregnant to showing no signs of said state—a clue denoting we are rapidly jumping across distinct timelines. Throughout the film, its circuitous assembly toys with the past and the present to reveal key pieces of information for us to map out the emotional transitions of the characters for over a year. Details that seemed irrelevant slowly assume their significant place in the plot.

Prompted by a manipulated encounter with Luciana (Agustina Muñoz), a more accomplished actress in an affair with a married man, Mariel decides to audition for the role of Isabella, a novice faced with a moral crucible: accepting the sexual advances of an unscrupulous judge to save her sibling’s life, in a new Buenos Aires production of the classic in question. Parallels between Mariel’s economic situation and Isabella’s predicament are summarized in a phrase calling for empathy that Luciana and Mariel repeat constantly as defining motto of their joint fictional alter ego.

“Do you want to act?” Luciana, familiar with the part since she had originally been hired to play it, asks Mariel while encouraging her to pursue it. Although she says she does, the latter lacks conviction. Unbeknown to her is that Luciana’s confidence may only be a façade. Plagued with indecision, both throttle along in their respective paths, which periodically intercept and lose contact. Neither is certain of their calling, but prove resilient.

Veterans in Piñeiro’s Shakespeare-inspired universe after starring in all previous installments of his multi-film undertaking, Villar and Muñoz have a delicate dramatic synergy that manifests via a marked by naturalness. Nuances in their performances seem extra prominent because they are deployed out of chronological order in a way that intensely juxtaposes their characters’ lowest and highest points.

An ode to the color purple as a symbol of equilibrium or the intermediate ground between impulsiveness and inaction, Isabella also color codes its two protagonists. Together Mariel and Luciana conform the alluring hue, one brings the gut-driven passion of red while the other puts the levelheaded coolness of blue in the mix. As such, their on-and-off friendship brings balance in their opposite approaches.

Early on, Mariel introduces a ritual involving the ocean and 12 stones meant to help one make a decision or weigh one’s doubt. Each stone represents an opportunity to retract and reassess. If all of them are thrown into the water then the decision was actually already taken and this procedure simply ratifies it. Conversely, if at any point a concern pauses the process, then it’s reasonable to reconsider further. It’s a psychological game to find validation for the choices we’ve already made or excuses not to take execute them.

As if a hard-earned epiphany born out of her intermittent relationship with Luciana had propelled her, Mariel then takes that idea and inventively translates it into a shareable artistic experience. Panels positioned to simulate square-shaped ripples in a vertical ocean exhibit a color gradation, achieved through controlled neon lights. It replicates how sun rays fall on the water at the specific time of day when the sky is purple. Painted stones glued to the panels sink into the colored light and disappear as if swallowed in the infinite body of water.

Her elaborate art installation/experimental theater piece that features voice-over explaining the rules of the reassuring activity serves as a strong visual representation of Piñeiro’s conceptual approximation to self-doubt and mankind’s flawed decision-making parameters. Incremental in effect, Isabella’s collection of storytelling elements coalesces to comprise a cohesive whole that pushes form while keeping a humanistic thesis.

A version of this movie that’s traditionally linear and avoids the ambiguous, intellectually beguiling flourishes at play here could certainly exist, but the charm of Piñeiro’s cinema is precisely that it thrives in fragmentation and heady experimentation. He undoubtedly delivers, again.