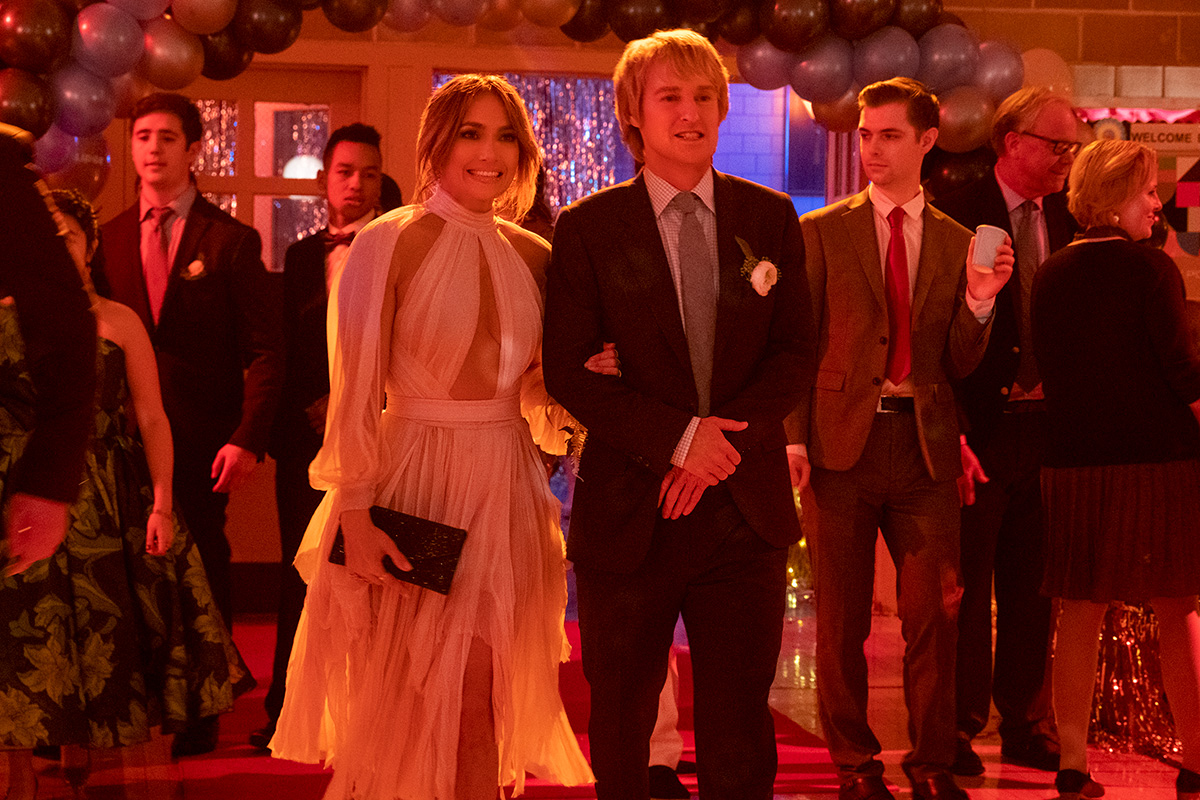 It’s not often a web comic gets optioned into a film produced by a superstar singer for a Hollywood studio, but that’s what happened to Bobby Crosby’s 2012 work Marry Me. Screenwriters John Rogers, Tami Sagher, and Harper Dill polish the “don’t all arranged marriages work” sentiment and pee-your-pants excitement comedic edges from the spontaneous and conflict-fueled meet-cute of 20-somethings to the existential crises of two fifty-somethings who, lost in life, are willing to take a leap of faith. The switch does wonders for palatability and marketability, charismatic performances from Jennifer Lopez and Owen Wilson pushing things over the finish line under director Kat Coiro’s stewardship. Her Kat Valdez is struggling to find love in the midst of fantasy; his Charlie Gilbert wasn’t even looking.

So not only has the usual Cinderella rom-com trope of a nobody woman falling for her prince been upended—so too has the notion that these outlandish scenarios must contain an over-zealous desire to “win.” I was ready to roll my eyes and check out the moment Kat and Charlie pull up to her hotel in her limousine shortly after they got married on-stage and streaming in front of 20 million people. (The event was supposed to showcase her nuptials with popstar Bastian—as played by Maluma—before they sing their chart-topping duet; then Page Six published footage of him cheating with her assistant seconds before the cue.) My money was on everyone involved missing the psychological turmoil of the situation. I was thankfully wrong.

Unlike the source comic, this wasn’t Kat doing something crazy. Rather this was a woman who thought she found “the one” after three failed marriages only to be proven wrong on the biggest stage possible in the most embarrassing way possible. She needed to find calm in the storm. She needed to do something that wasn’t just running off-stage. So she looked in the crowd, found Charlie—divorced father of a 12-year-old daughter (Chloe Coleman’s Lou) who was only there because his coworker Parker (Sarah Silverman) had two extra tickets and knew taking them would help make him look “cool” in Lou’s eyes—holding Parker’s “Marry Me” sign, and invited him up to give viewers what they wanted. And he played along knowing she needed help.

Instead of him going up to her hotel room, she has her driver take him home. The assumption is that it’s over. Kat needed a friend. Charlie complied. And if her manager (John Bradley’s Collin) had his way, it would have been. Except, of course, that 20 million people saw what happened. Maybe Kat didn’t run off the stage, but she did get married. Whether it was real or not, ignoring it would only make the situation spiral further out of control. She wonders if she can spin it into a positive. Get Charlie on-board for a few months to hang out and get to know one another. Turn the concept of picking someone different (a nobody, boring math teacher) into a conscious choice to ultimately find herself.

It might not be reinventing the wheel as far as this genre goes, but it is honest. I’m not sure you can ask for more than that. Kat knows her life is crazy, flying off to exotic places every other day for insane amounts of money. Charlie knows his life is all about a routine that allows him to 100% be there for his daughter and his students. Neither wants to compromise who they are and, as such, both are willing to meet each other on their terms and truly discover the other beneath any façades they may otherwise place for strangers. He talks about his deceased mother. She talks about her ambitions in art above celebrity. They catch a glimpse behind the other’s curtain.

And it’s kind of great. The first two-thirds of Marry Me really work because they stay grounded to reality and the insane scenario they’ve agreed to traverse together. They become friends. That evolves to confidants. Their first kiss comes with the conscious, verbal question of whether actually falling for each other is the smart thing to do. There’s an authenticity to their relationship’s growth that allows Lopez and Wilson to shine emotionally in roles that are usually too one-dimensionally beholden to the plot to pop in a meaningful way. With Silverman’s clichéd “gay best friend” along for the ride to add much-needed levity, Lopez and Wilson are given the room to build a rapport that feels like more than merely lustful attraction. They like each other.

That’s not to say the final third doesn’t fall into the same old, tired traps of forcing conflict where conflict doesn’t need to exist; God forbid you let them push forward without Bastian coming back into the fold so exaggerated jealousy can spark overblown self-doubt when natural self-doubt would have been more attuned to that more grounded approach. Between that and another entry into the annals of epiphany-catalyzed races to declare one’s love, I eventually did find my eyes rolling after all. But I didn’t check out. Hokey overdrive and convenient oddities aside—four hours between NYC and Peoria seem like enough time when taping The Tonight Show at 5pm the day before, layover or not, and why isn’t Lou’s mother watching her mathalon?—it still felt real enough.

It helps, too, that the music is good (Kat and Bastian sing a lot, each song being plot-specific considering they’re writing about their love and its demise), the integration of social media effective (Kat’s life is online and Charlie still uses a flip phone), and the inclusion of Lou and the kids as a way to see both Kat’s and Charlie’s hearts beautifully tears down their defenses as well as ours where accepting this “whirlwind” (it is months, not days) at face value. The characters are never mean or vindictive, either. Bradley, Silverman, and Michelle Buteau are never undercutting the potential of what the people they care about are embarking on. The only ones who risk ruining it are Kat and Charlie themselves. We hope they don’t.

Marry Me opens wide and streams via Peacock on February 11.