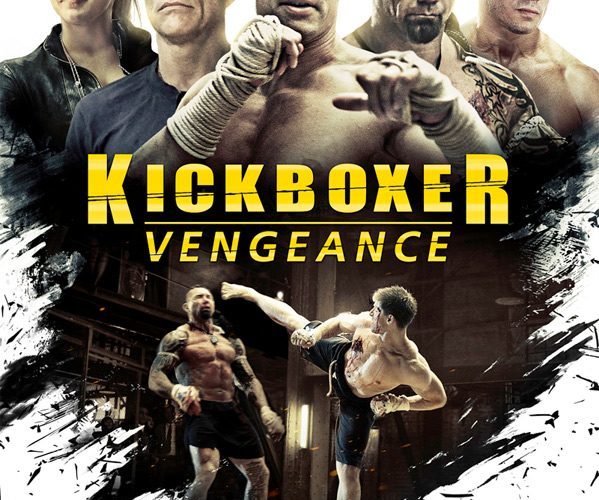 Even before Kickboxer: Vengeance hits screens this week, the film’s star, stunt performer turned leading man Alain Moussi is already hard at work filming the third entry in the series, Kickboxer: Retaliation. Vengeance, retaliation… do I see a pattern developing? You might be thinking, isn’t revenge merely a synonym for retaliation? Perhaps we can also look forward to Kickboxer: Reprisal and Kickboxer: Retribution. A sequel of sorts to Kickboxer (1989), the lazily titled new film follows Kurt (the aforementioned Moussi, last seen as Jai Courtney’s stunt double in Suicide Squad) who travels to Thailand to study Muay Thai kickboxing under the cruel tutelage of Tong Po (Dave Bautista). After an initial sparring match, we learn that Kurt’s brother Eric was killed in the ring by Tong Po, leaving our hero hellbent on revenge. Unable to defeat his brother’s killer, Kurt finds a new trainer in the mysterious Master Durand (Jean-Claude Van Damme) who helps mold him into an unbeatable fighter.

Kickboxer: Vengeance, the latest from director John Stockwell (Crazy/Beautiful, Turistas), is less of a sequel than a soft-reboot, as Van Damme does not reprise his role from the original in which he played Kurt, a tough-as-nails kickboxer with a brother named Eric. In the new film, Moussi’s Kurt is a lifeless character, no thanks to the blandly monosyllabic dialogue he’s tasked to recite. His expressionless performance is something to behold, a confused soul, eyes held wide open, seemingly frozen in the headlights. You get the feeling Stockwell, and screenwriters Dimitri Logothetis and Jim McGrath trimmed each line of dialogue down to its most concise form, afraid the inexperienced thespians wouldn’t sound believable for more than a few words at a time.

Throughout the film, as Kurt and Master Durand travel from one location to the next, they’re sometimes inconvenienced by poorly choreographed action sequences, shoddy diversions which last a few minutes and lead to no excitement or audience engagement. A fight breaks out roughly every ten or so minutes in a mostly unsuccessful attempt to keep the pace moving. If the film had reached a more fevered level of intensity in the vein of the crazed extended sequences of The Raid or Mad Max: Fury Road, we might have been distracted from the overwhelming blandness. During a later chase sequence, workers are seen carrying fresh new plates of glass across a street, which are predictably shattered within moments, punctuated by one of our heroes sneering as punchline, “Oops!” Not an ironic parody, but rather a dusty old gag ripped straight from half a dozen other movies to no fruitful effect.

Anyone who grew up on the films of Chuck Norris should be aware that a bad film can still contain terrific sequences. The movie may be overcome with trite, half-written characters off on some “who-gives-a-care” mission, but if the filmmakers nail it, you can still find yourself having a good time in the middle of an eye-rolling mess. While Kickboxer: Vengeance fails to attain such glory, the film’s merciful high point arrives when Van Damme’s Master Durand ties Kurt to a bed and playfully thwacks him with a bamboo reed, as a method of inuring our hero to pain. The more beguiled you are by Van Damme, the more you’ll enjoy this fun, albeit brief comedic scene. The rest of the cast are less prosperous, yet largely blameless as they too are given almost nothing to do with their roles. Bautista’s turn in James Gunn’s Guardians of the Galaxy feels deeply nuanced by comparison. Here, Bautista’s muscular physique does all of the work for him, the character mostly mute, save for a few forgettable utterances.

With some bad movies, a palpable sense of contempt for the audience can be felt, the assumption being that we’re too dumb to notice yawning plot holes or cheap excuses for drama. This is not the case with Kickboxer: Vengeance. In truth, it’s not a movie for people who love movies, but rather for those who love kickboxing and MMA fighting. There’s unquestionably an audience here, but it even lacks the so-bad-it’s-good quality found in those fun ’80s guilty pleasures, leaving us bored to tears.

It’s worth noting that even the schlockiest action films are often less interested in plot and character than in car-crashes or intensely brawling fist-fights. Those explosive elements are exactly what the audience paid to see. Yet, even the fights are dull and mediocre, including a slavishly established “fists covered in broken glass” showdown, which feels as if it was curtailed in editing to attain a more family friendly MPAA rating. Perhaps only of merit to the hardest of hardcore Van Damme completists, Kickboxer: Vengeance is a rehashed, lackadaisical outing in need of goofy silliness and campy flair.