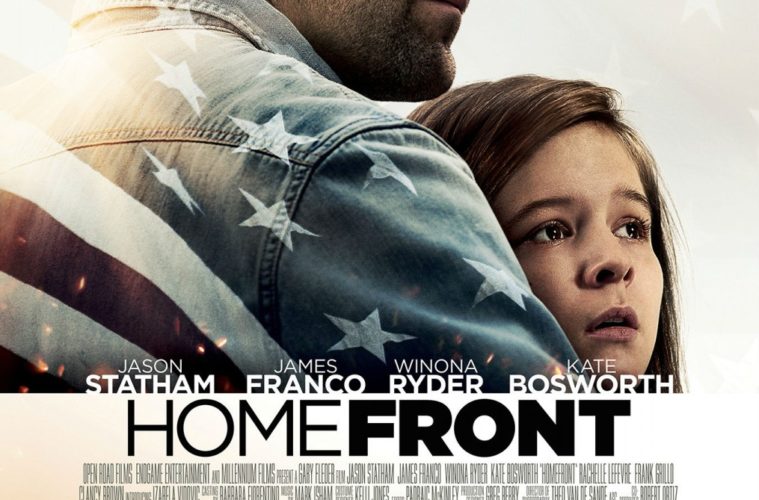 For a certain type of moviegoer, the on-paper credentials of Homefront are undeniably encouraging: written by Sylvester Stallone (whose initial intentions here were to adapt Chuck Logan’s novel into a final Rambo entry), and co-starring Jason Statham and James Franco (as, respectively, an ex-DEA agent and a trailer-trash meth dealer), the film has all the makings of an agreeably ridiculous revenge thriller made on the margins of the industry. (The anticipation wasn’t unlike that of the De Niro–Travolta vehicle Killing Season, from earlier this year.) That Homefront turns out to be a “bad” movie is one thing; that it’s actually a grim, unpleasant, relatively humorless product is altogether more surprising, and more disappointing. The chances of a movie like this working are astronomically higher if it projects an awareness of its bargain-bin stupidity, or at least just a basic sense of humor, but both Stallone’s dour script and director Gary Fleder’s disposable handling of the material only offers such pleasures in fleeting, all-too-rare doses.

Beginning with a drug-bust sequence that exposes a lack of action-movie chops on the part of Fleder (Kiss the Girls, Runaway Jury), Homefront quickly establishes the professional and physical prowess of its hero, Phil Broker (Statham). Seen at first as an undercover member of a tatted-up biker gang (with long hair that resembles the opening portions of Steven Knight’s Statham-starring Redemption), Broker successfully exposes the gang’s meth-dealing operation, but fails to resolve the situation in a tidy manner after the son of the gang’s chief leader is shot 47 times by a slew of federal agents. Insert an ominous threat from said gang leader, and Homefront then flashes forward a full two years, with Broker and his 10-year-old daughter, Maddy (Izabela Vidovic), now living in the rural town of Rayville, Lousiana, where Broker hopes he can escape his perilous past.

Broker’s wife has been dead for a year by the time Homefront catches up with him and Maddy. Evidently, his standalone influence has had a great impact on Maddy’s personality, as an early scene at recess shows her quarreling with — and, ultimately, physically dominating — a school bully. When the bully’s testy mother, Cassie Klum (a strung-out-looking Kate Bosworth), gets wind of this, she and her husband Jimmy (Marcus Hester) arrive on the scene, leading to yet another altercation — this one between Broker and Jimmy. (I don’t have to tell you who wins that fight.) This type of domestic conflict being the exact kind of thing Broker came to Rayville to escape forever, he’s immediately remorseful for having gotten himself and Maddy involved in such shenanigans. But by the time he apologizes to Jimmy, it’s too late: Cassie has already asked her brother, the meth-dealing Gator Bodine (James Franco), to enact revenge against Broker. (Yes, she also asks him for meth.)

Franco’s first scene, in which his Gator pummels a group of drugged-up teenagers with a baseball bat, is indicative of the kind of movie Homefront should have been. Though Fleder’s reliance on canted angles and shadow-heavy lighting schemes suggests a too-pronounced sense of awe at Gator’s capacity for violence — the character doesn’t need such photographic respect to be effective; it’s enough just to see the actor doing his thing — the bare bones content of the scene is hilarious, and Franco milks his line readings for all they’re worth. Elsewhere, however, the potential of Franco’s portrayal gets drowned in the overall seriousness of the movie; save for a few choice exceptions, the dialogue Franco is given barely even offers him an opportunity to be crazy or diverting in any notable way, reducing the character to a stock villain that just sits there on the screen. Other supporting roles by good actors — Frank Grillo as a crawfish-gnawing biker, Winona Ryder as Gator’s tacky girlfriend — are similarly marred by a serious-minded treatment that ought to be reserved for more prestigious fare.

Indeed, because Fleder takes the material at face value, Homefront is almost inadvertently successful in certain areas: the clashes between Statham and the reckless-hick locals may not be as entertaining as we expected, as Statham’s action-star magnetism is often lost in the traffic of Fleder’s illegible direction, but the rapport between Broker and Maddy’s counselor (Rachelle Lefevre) is surprisingly sweet, even if it doesn’t amount to anything. Additionally, the movie treats the father-daughter bond between Broker and Maddy with consistent sincerity, devoting more than a couple scenes to the still-profound emotional trauma wrought by the death of Maddy’s mother. The film’s central question is ultimately a dramatic one: can Broker find a way, both emotionally and in reality, to raise Maddy in a wholesome, non-violent environment?

The problem with this thematic territory is that, no matter how earnest or well-intentioned, it’s completely outside the boundaries of what a movie like Homefront should be going for. That the surrounding sequences of fistfights, meth cooking, and “country payback” are more grisly and off-putting than B-movie-entertaining only makes matters worse; the essentially pre-packaged enjoyment of Statham and Franco in these roles is discarded for narrative and character detail that, at its best, is simply run-of-the-mill. What we’re left with is a film that could’ve benefited significantly from the kind of levity (Escape Plan), macho wit (take your pick of Statham titles), and energy (Spring Breakers) on display in other recent films from this capable group of collaborators.