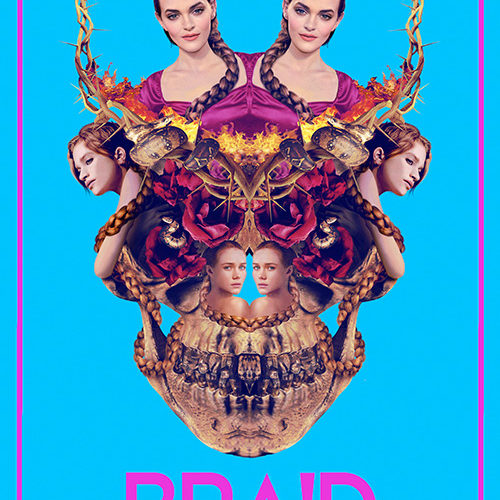 Review: ‘Braid’ is a Memorable Ride Through a Nightmarish Hellscape

Our lives consist of uncertainties. To progress forward is to confront each new possibility as the product of dream or nightmare — an open door to leap through and succeed or a closed window to surrender all hope of escape. We retreat within ourselves for the motivation to jump higher and rely on those we trust to help break our inevitable falls. One road leads to comfort until the shine wears off. The next winds its way towards rebirth until tragedy strikes or self-doubt sets in. Round and round we go, overlapping each chapter with its replacement until we can no longer recognize past from future. We strive for meaning through work, love, and family, sacrificing identity to a performative dance forever transforming us into our next “best” self.

For three young girls who played make-believe in a tree house, that cycle has come to its latest crossroads a decade or so later. Petula (Imogen Waterhouse) and Tilda (Sarah Hay) are now caught in a bind after their joint effort as drug dealers hits a snag in the form of police at their door. Desperate, broke, and indebted to their supplier for losing his stash, they have only one option to break even: visit Daphne (Madeline Brewer) at her grandparents’ old home and look for the family safe. They know she’s there because the third corner of their once inseparably triangle cannot leave. Daphne’s a real stickler for the rules and “number three” specifically states nobody is allowed to exit the premises until the game is done.

That game consists of roleplaying with Daphne as mother, Tilda as daughter, and Petula as doctor. Rule one says everyone must play no matter the cost of violence inflicted as a result of the reclusive Daphne’s tenuous hold on reality. Rule two explains that no one is allowed to crash the party. Tilda and Petula obviously aren’t strangers and their arrival reveals their desire to play, so it’s all a matter of sticking it out to the end. Maybe they’ll survive Daphne’s sadism and find the safe they hope is full of enough money to start anew. Maybe their pasts will come back to haunt them thanks to a healthy dose of psychotropic drugs to get through the present. Or maybe they’ll never see the outside world again.

What’s so great about Mitzi Peirone’s directorial debut Braid is that we’d be mistaken to assume anything on-screen actually does happen in the outside world. Some environments seem like a reality for Petula and Tilda to roam free and get in trouble before searching for a way out, but it’s not long before the translucent becomes opaque. Peirone reverses the usual trend of providing answers so her audience can open its eyes, inundating us with more and more questions thanks to a full sensory overload of sight and sound instead. Time becomes malleable, danger but a brief interlude forgotten as quickly as it was born. She removes the pathways from one scene to another so we can find ourselves in the same bottomless rabbit hole as her characters.

Peirone has this luxury because her film is the first narrative feature to be fully financed via cryptocurrency on the Ethereum blockchain platform. Those who gave money aren’t therefore fans donating money to a cause — they are investors fueling the creative arts in ways that allow Peirone to retain final cut when other producers were only willing to provide funds for a compromised vision. So she can mess with her aesthetics in a bid to differentiate states of being and seeing without fearing recourse. She moves from color to black and white to an over-saturated kaleidoscopic funhouse of pinks and purples, rotating the camera upside down when disorientation proves necessary to understanding what’s going on. And she positions mirrors as doors and windows, purveyors of hope and fear.

Eventually we learn about a tragic accident, meet a sort of guardian angel in Detective Siegel (Scott Cohen), and wonder how deep Petula and Tilda are willing to go to procure the spoils of their deception. Or is it ingenuity? I guess that depends on whether you see the safe as the game’s prize or merely an ulterior motive to justify playing. And just when you think you have a handle on the truth, roles become shifted. Suddenly the players become the played, the prisoners turning into jailors. There’s maiming, murder, bondage, and a diabetic coma’s worth of sugary sweets put out for dinner. There’s poison, knives, and rope with two women always bound together as predator or prey — one instance shackling two heads with their braided hair.

And then comes a hallucinatory climax bringing us full circle to an out-of-time prologue that never quite reoccurs. It’s here that we see the signs of repetition skewed by disparate experiences, ambitions, and endgames. Artistic motifs of three women placed throughout Daphne’s estate begin appearing less like separate entities intertwined and more like separate appendages of a singular whole. Petula starts running from one previous set to the next as though caught on a strip of film flapping at the end of a reel only to be reconstituted to another example of her anxiety. Malice is erased, pain transferred, and agency won by she who’s ready to step back into reality — everything we’ve thus far seen rendered as the tumultuous and abstract internal fight for direction made physical.

It’s a memorable ride through a nightmarish hellscape where insecurities war with confidence when seeking to manufacture the latest version of what one must become to get through the challenges lying ahead. Control is simultaneously relinquished and made oppressively visible to these women as they fluidly switch functions to be that which the others need. Each actor must then shift from aggressively violent to vulnerably naked on a dime whenever Peirone decides to spin the house and see who comes out on top. We ultimately align ourselves with Petula because her position as doctor lets her feign superiority over her patient (Tilda) while succumbing to her employer’s (Daphne) whims. She’s the one caught in the middle — destined to rise above, be swallowed up, and inevitably play again.