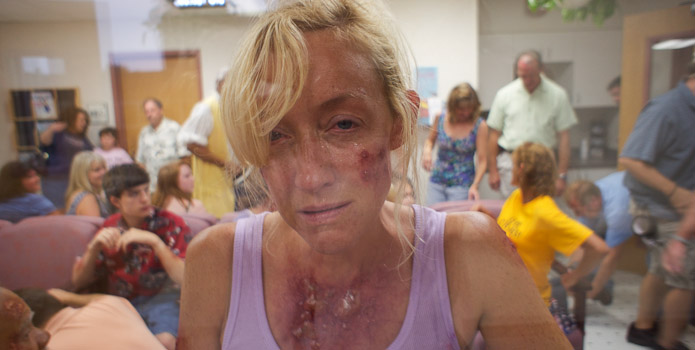 After directing classics like Diner, Rain Man and The Natural, director Barry Levinson is headed down a very different path for his next film, The Bay. Teaming with producers of Paranormal Activity and Insidious, the horror film, which is set to premiere as part of the TIFF Midnight Madness slate, tells the story of a toxic outbreak in Chesapeake Bay.

We’ve got the first trailer and poster today, which actually looks to be quite terrifying. I could give or take many of the recent found footage horror films, but considering this takes a slightly more realistic approach it seems to be more unsettling that most in the genre. Check it out below via Apple for the film also starring Will Rogers, Kristen Connolly, Kether Donohue, Frank Deal, Stephen Kunken, Christopher Denham and Nansi Aluka.

The quaint seaside town of Chesapeake Bay thrives on water; it is the lifeblood of the community. When two biological researchers from France find a staggering level of toxicity in the water, they attempt to alert the mayor, but he refuses to create a panic in the docile town. As a result, a deadly plague is unleashed, turning the people of Chesapeake Bay into hosts for a mutant breed of parasites that take control of their minds, and eventually their bodies. A brutal and harrowing creature feature for the 21st century, THE BAY chronicles the descent of a small town into absolute terror. The Bay premieres at TIFF and then arrives in theaters and on VOD on November 2nd.