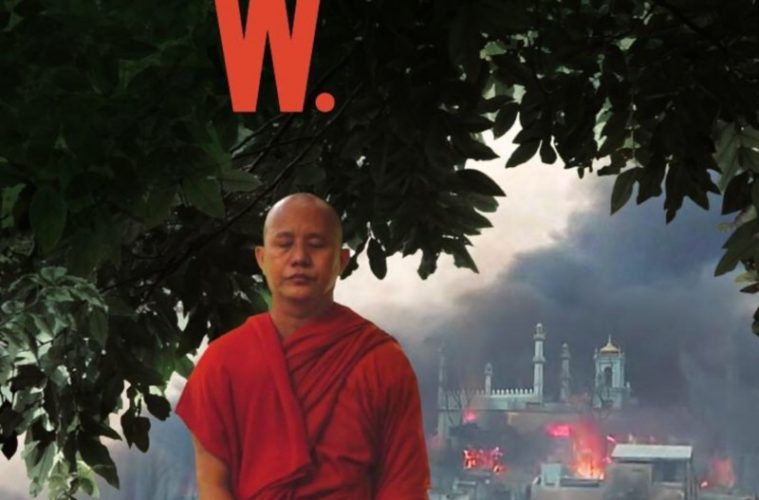 When attempting to parse the root causes of religious extremism, a common argument in western discourse involves not only pointing to Islam as an inherently violent ideology, but to Buddhism as its polar opposite; a dogma so rooted in peace and non-violence that it could not possibly result in terror. Of course, these arguments are rarely in good faith, and they are un-attuned to the full scope of the global refugee crisis and its long, macabre history. The Rohingya displacement in Myanmar has seldom touched their borders. Such is the limitation of the western lens, but it’s a lens that French director Barbet Schroeder puts to tremendous use in The Venerable W., a chronicle of our modern extremist and “fake news” climate delivered in a highly concentrated dose, so much so that its New York Film Festival screening had to be prefaced by the short film What Are You Up to, Barbet Schroeder?, in which the director explains why he felt compelled to make it.

This year’s New York Film Festival line-up (described by The Village Voice as “counterprogramming”) is rife with stories adjacent to worldwide migrant crises, but where Schroeder’s documentary deviates from its peers is its choice of subject. It is not a film about the victims of Buddhist extremism, though it most certainly makes their voices heard. It isn’t even about the perpetrators of Myanmar’s anti-Muslim violence, even though there is disturbing footage of them a-plenty. No, The Venerable W. is a film about the hateful ideologies that precede said violence, focusing almost entirely on the perspective and rhetoric of a young Theravada Buddhist leader and the founder of Myanmar’s nationalist “969” movement, Ashin Wirathu. He is our entry point in to this twisted journey, one presented in as conventionally documentarian a manner as possible; the talking head we spend most of the runtime getting to know as we’re forced to examine our own instincts.

Wirathu comes off as personable. He has the kind of friendly demeanor one wouldn’t normally associate with a religious orator, like the image one might have of the Dalai Lama before ever watching his interviews. Backed by shelves of religious texts and gleefully sharing videos with us on his cell phone, he rides a distinct line between tradition and modernity, and we open the film listening to him speak about African Catfish. All seems in line with what we ought to see as Buddhist normalcy, as a peaceful, head-shaven religious leader draped in maroon and saffron tells a fable about a violent animal. However the conclusion he reaches is not concerned with non-violence. Instead, it immediately brings to mind the most violent ideologies of history, as he compares the violent sea creature from his story to Myanmar’s Muslim population. Wirathu is not your average Buddhist, as the other Buddhist leaders in the film will tell you, but he is your average extremist.

Wirathu’s concerns, ironically, involve perceptions of Buddhism in the west. He holds accountable a leader with a particularly animalistic breathing technique for teaching it at Berkeley, but the sheer disconnect between his fears over being generalized and his own generalization of an ethno-religious minority in Myanmar is one of those cinematically stunning moments that hinges on nothing more than simply letting him speak. It’s about as stunning as the resembling between the anti-Muslim propaganda adorning the exteriors of his monastery — gory depictions of ISIS beheadings and the likes — and the footage that shows up later in the film depicting the ethnic cleansing of Muslims (by people who listen to his sermons and his wildly popular Facebook posts), including what appears to be actual video footage of a beheading in the distance. To call The Venerable W. a difficult watch would be putting it mildly.

Context is key in all of this, as it is in most matters, and the film posts the lack thereof as a prerequisite to extremism. It details the long history of the social tensions at its core, going back not only to when the Rohingya crisis first reached its peak in the 1970s (interviewing a victim of the displacement who compares his de-legitimization and his treatment at the hands of the Burmese government to that of the Jews at the hands of Hitler), but to the specifically nationalistic Pali roots of terms like “race” as spoken in the Burmese dialect, originating thousands of years in the past. Scenes of violent retaliation perpetrated by Muslim villagers are presented without pretext so that we may experience them from a distinct standpoint of lacking information, eliciting gut reactions that are immediately called into question when the film contextualizes their circumstances afterwards. Wirathu speaks of the growing Muslims population that threatens Myanmar’s national identity, but the actual statistics do not support his claim. Muslims make up less 5% of the population, but this discrepancy isn’t presented in isolation either. The disconnects between perceived and actual Muslim populations in western countries soon come to the forefront, but not before Wirathu makes his feelings on western politics clear in an especially disconcerting moment, espousing his support for Donald Trump.

The Venerable W. walks a fine line between presenting Wirathu’s perspective as-is so we may experience its full effect at a local level, and providing broader, more factual perspectives in order to see how it stacks up to similar issues elsewhere in the world. Leaders, victims and foreign activists help put Wirathu’s words and their resulant actions into context, speaking clinically to the unseen interviewer just off camera, though it’s Wirathu and Wirathu alone who looks directly into the lens. A cinematic literalization of the war between facts and feelings, as everyone else appeals to the viewers rational self but Wirathu’s words are meant to pierce the soul.

The biggest challenge to anything the Venerable one says however, is not merely the factual truth surrounding his sermons. It is the litany of the spiritual truths espoused by Buddhism itself, spoken softly over the bloody images in the wake of Wirathu’s words. A woman narrates, from the perspective of a Rohingya victim, the teachings of the Buddha that aim to rid the world of hatred. One final, stunning disconnect that Wirathu and his followers are unable to see as they use their religion to violently persecute a religious group they themselves perceive as violent.

Bigotry and extremism are not logical, but they are very real. Their roots can be traced. What’s more, they can be curbed if we know what we’re up against, but how intimately must we know these evils before they can be eradicated? For all the horrors that it refuses to shy away from, that fundamental question is in essence why The Venerable W. is a necessary, up-close portrait in the vein of Schroeder’s own General Idi Amin Dada (1974). It isn’t just an examination of hate speech, but a reflection of our worst instincts when it comes to how we process and act upon information. The scariest thing about it is not the footage of the beheading it features, but rather that Wirathu comes off as so human and friendly in his interviews despite advocating for an ethnic cleanse. He could be any one of us if we’re not cautious.

The Venerable W. screened at the 2017 New York Film Festival.