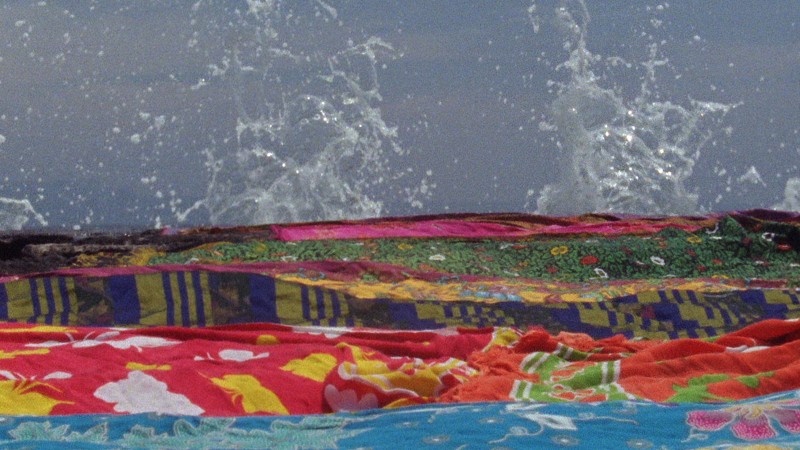 Jodie Mack’s work is vital, both in the sense that it is an essential cornerstone of modern film practice but also–and more significantly–alive. With a stop-motion style of animation that returns the genre to its oft-forgotten root definition of literally bringing inanimate objects to life, her experimentation with form is refreshingly playful and unpretentious, liberating materials from their settings and placing them in conversation with less colorful aspects of the world at large. Her first feature The Grand Bizarre has been a long time coming, disrupting a loaded filmography of significant, acclaimed short films. With an hour run-time that abstractly chronicles the travels of a group of vibrantly colored, escaped textiles and fabrics, Mack escalates breathtaking aesthetic revery into a stimulating discourse on the global economy.

She does not confine herself to a single thesis, but rather explores alongside her subjects, aloofly undertaking insightful and creative tangents. The opening scenes, somewhat disconnected from the rest of the work, posit a fascination with the natural elements: a shot of a fire crackling at night makes way for a shot of waves crashing alongside a beach; scenes of the fabrics marching alongside desert landscapes are juxtaposed with images of them peering at clouds through airplane windows. No longer restrained to their material contexts, these textiles eventually manage to implicate the restlessness of modern life. Now armed with the ability to move, they are more like us: tourists and locals, travelers and commuters. There are sections that seem to depict a redevelopment of society, beginning with various cultures’ semiotics, maps, before moving towards music, literature, and haunting images of technology. Initial scenes, brimming with heart and an innocent curiosity for discovery, are intercut with tense moments of mechanized labor which meet the fabrics with the means of their own production, and abstract digital imagery that denote movements towards a virtual immaterial.

She always returns to her unassuming pieces of fabric, however, and how they fit into these new innovations. The assemblage of her textiles are both beautiful–representative of cultural identity and earnest labor–and tragic–fetishized into a public demand which in turn justifies mass reproduction; in denying us the origins of her collection, Mack allows us to wishfully imagine their backstories.

The 16mm film stock’s materiality is also invoked, superimposed onto the textures of the fabrics. With this heightened tangibility, Mack broadly brings to mind the mechanisms of the cinema itself, drawing attention to the DIY, handmade quality of her films. There is a romantic or perhaps even maternal care given to each and every frame. The realization that there is nothing accidental about the finished product–that every cut is intentional–is shocking for such a free-flowing film.

Almost equally important as her understanding of aesthetic and images is Mack’s employment of sound. The film is a lyricless music video, with the sounds of sewing machines, machinery, planes, trains remixed into hypnotic industrial beats that provide a manic, restless energy. These frenetic sounds also lend themselves to poetic moments of silence, in which the images speak for themselves. The film finishes with an act of aural figuration, as a final montage of close-up fabric textures is accompanied with the sounds of the artist in her studio, capturing the photos that would become the film.

The Grand Bizarre screened at the New York Film Festival.