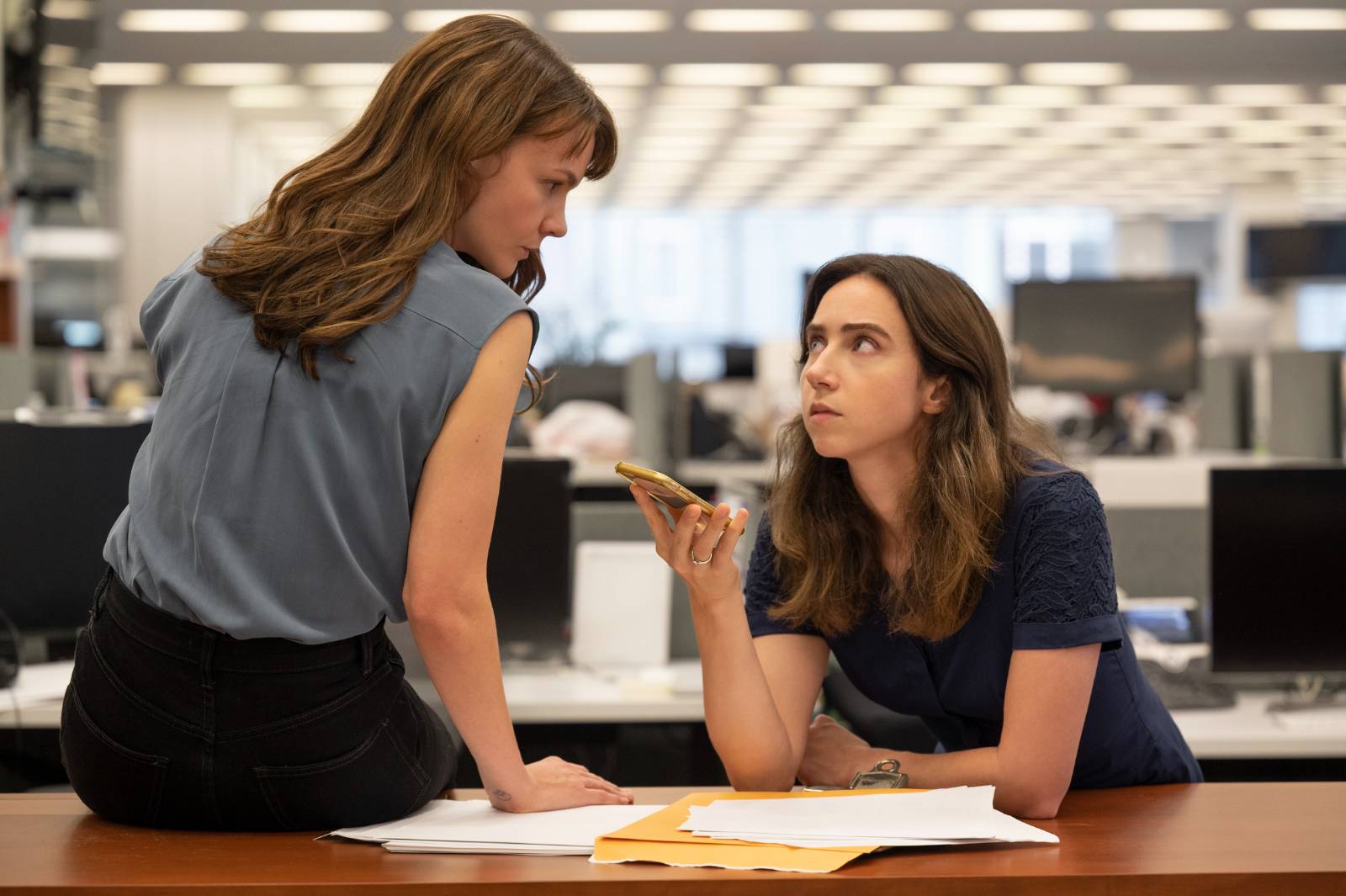 “Can I quote you?” As it did throughout Jodi Kantor and Meghan Twohey’s intrepid investigative journalism for the New York Times, that question reverberates in Maria Schrader’s She Said, an understated, polished procedural that chronicles the way two reporters exposed Hollywood mega-producer Harvey Weinstein’s decades of sexual abuse and assault. Their unrelenting pursuit to convince accusers to go on-record comprises the majority of this movie, which builds to pressing publish on the bombshell, 3,300-word article that uncovered allegations made by actresses—most notably Ashley Judd—and current and former employees, along with previously undisclosed corporate records, documents, and settlements that kept numerous women from speaking out.

Since then more than 80 women have come forward with accusations against Weinstein, who was eventually convicted in 2018 as a rapist and is currently serving a 23-year prison sentence. In many ways the details of Weinstein’s sex crimes and aggressive behavior ignited the #MeToo movement, which began taking shape in 2016 after sexual-harassment and assault allegations were made against Donald Trump in a story Twohey helped break ahead of his eventual election. As both reporters write in their 2019 book on which this movie is based, their reporting became a “solvent for secrecy, pushing women all over the world to speak up about similar experiences.”

Some of those women share their horrors in Ursula Macfarlane’s 2019 documentary Untouchable, a serviceable (though not-quite-comprehensive) account of Weinstein’s actions and the complicit power structures that fostered them. As a narrative slice of non-fiction, however, She Said is more interested in the emotionally-charged journalistic process that led to a collective silence-breaking; it’s filled with phone calls and coffee breaks, editor confabs and lunchtime negotiations, door knocks and door slams. But Schrader doesn’t get too bogged down in the granular research bolstering all of this person-to-person interaction, nor does she aim for loud, third-act pontificating (characteristics that make up the best and worst of Spotlight). The subdued thrills of this movie come in small doses—an unexpected meet, a celebrity visit, a dossier hand-off, a long staredown.

In the same way an effective lede often contains a strong anecdotal hook, She Said begins with a brief, arresting sequence. In Ireland circa 1992, a young Laura Madden stumbles upon a film set and, mesmerized by the production, soon finds work as a crew member in a montage that implies this could be a magical career possibility. Then the hard cut to Laura running through the street, scared and sobbing, holding clothes in her arms—a jolting start, a dream destroyed. It’s also the emotional whiplash that Kantor (Zoe Kazan) and Twohey (Carey Mulligan) will begin to scratch in New York City almost 25 years later, when they collaborate to look into rumblings regarding Weinstein’s improprieties and quickly learn how many others experienced similar kinds of life-changing encounters.

Their professional partnership starts more prickly than peachy. Twohey has a veteran, world-weary presence—she’s still shaken by the minimal impact of her Trump reporting and the antagonistic phone calls it’s earned. Returning from maternity leave and bearing postpartum depression, she finds a less cynical and wide-eyed Kantor eager to go after the Hollywood establishment. (Kazan’s bright-eyed warmth and vulnerability contrasts nicely with Mulligan’s icier demeanor, which eventually goes toe-to-toe with Weinstein’s legal team.) This story, Kantor suggests, isn’t just about Weinstein or celebrity gossip, but an entire industry refusing to examine its most toxic leaders and the architecture of silence built around them. With approval of their editors (Patricia Clarkson and Andre Braugher) they begin reaching out to Rose McGowan, Gwyneth Paltrow, and Judd (playing herself), before they realize the depth of other women tethered to this story. Schrader’s decision to intersperse shots of women bustling through New York only serves to underscore the countless unknown stories that might be lingering beneath the Times building.

What makes She Said a unique entry in the cinematic-journalism canon is its insistence on showing both women’s motherly responsibilities without insinuating that family time amounts to some zero-sum game. Kantor has two daughters she entertains in the margins of her on-call work life, offering support for Twohey as she navigates motherhood for the first time. They lean on their husbands without ever sacrificing an egalitarian approach to parenting—outside a heavy-handed Skype call, Schrader (using a script from Rebecca Lenkiewicz) finds time for her protagonists to push strollers and share Netflix passwords while taking important calls. There aren’t any melodramatic meltdowns—here, being a present mother is a sign of strength and resilience that grounds all the crusading reporting by giving it purpose.

Maybe that sands off some of the spiraling, rabbithole shoe-gumming that makes up most great investigative thrillers—the closest moment to capturing conspiratorial chills of Zodiac or All The President’s Men takes place in a dimly lit restaurant where Kantor meets Weinstein’s longtime accountant willing to share a pertinent memo. Otherwise She Said‘s main source of friction is in headbutting nondisclosure agreements and gag orders disguised as admissions of guilt. These confrontations still contain their moments—during one stretch, Kantor takes a trip across the country and unintentionally breaks the news to a husband that his wife had reached a settlement while working at Miramax in the ’90s. It’s a reminder of the awkward, heartbreaking position Kantor has put herself in, and Kazan appropriately melts in her car, on the brink of losing hope she’ll acquire the necessary documents to get this to print.

The difficult part about a movie like this is knowing who and how much to show. Schrader mostly restrains herself, incorporating a brief phone call with Trump’s voice, the large balding backside of Weinstein as he storms into the Times office (earning a couple chuckles), and a real, harrowing audio recording from Italian model Ambra Gutierrez. Maintaining an unshowy cinematography, she implements flashbacks to Venice hotel rooms, layering voiceovers (including those of an older Madden, played by Jennifer Ehle, who returns to play a critical role) onto images of empty bathrooms and dark hallways. They evoke the quiet, creeping horror that marked Kitty Green’s The Assistant, perhaps the quintessential movie of the #MeToo era, where a Weinstein stand-in is never seen, only felt. It’s hard to replicate the haunting isolation and chills of that movie, but Schrader isn’t interested in diving too deep into these traumatic experiences.

It would be reductive to call this Hollywood back-patting itself. This is, after all, more about the success of a newspaper and its dogged reporters. It’s also worth noting that Mulligan and Kazan have been outspoken champions throughout the #MeToo movement, and their casting (along with the slightly jarring decision to let Judd play herself) feels intentional, a natural extension of their everyday fight to speak up for women within an industry that remains unequal. But five years later there’s an unsettling feeling around a movie produced in part by Plan B, owned by Brad Pitt, who was recently accused of abuse by his ex-wife Angelina Jolie. Early into She Said someone notes “it’s hard to get women to talk.” And while significant progress has been made in the wake of Weinstein, that universal, matter-of-fact statement suggests it was hardly a moment of industry absolution. There’s much more work to be done.

She Said premiered at the New York Film Festival and opens on November 18.