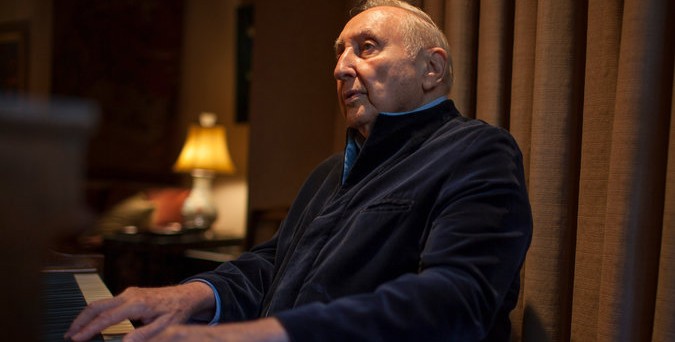 For many of us, Ethan Hawke is the playful, charismatic actor who’s had a solid career, with highlights often coming in the form of a Richard Linklater film. His work in the director’s Before trilogy and, most recently, Boyhood have made him recognizable as a likable guy struggling with questions of fulfillment and aging. It is perhaps unsurprising, then, to see him occasionally peek from behind the camera in Seymour: An Introduction, his first documentary, to tell stories and ask questions that reveal a persona not at all unlike his star image.

Conspicuous as they are, these appearances, mostly in voice, essentially amount to cameos. The subject of Hawke’s film is Seymour Bernstein, a pianist who had a run of brilliantly reviewed shows, including some at the then-new Alice Tully Hall on Manhattan’s Upper West Side, but abruptly quit his career to instead teach. Bernstein is probed for questions about why he quit (he cites nerves, a disdain for the commercial side of the industry, and a fear of becoming a “total neurotic mess,” like so many other prodigies), self-fulfillment, and abstract inquiries regarding music and its metaphysical effects on humanity.

Between these segments, we see Bernstein teaching students — including one scene in which he stops a student repeatedly, pressing her to play the opening bars perfectly, in a way that anyone who has ever been a music student can identify with — and preparing for what will be his first live performance in decades, organized by Hawke for his theatre troupe. This process involves trying a number of Steinway pianos, with Mr. Bernstein telling both his pupils and the camera what distinguishes seemingly identical musical instruments. The approach, meanwhile, is straightforward. Hawke does not play with structure, address fiction / documentary boundaries, or display a critical self-awareness — nothing, in other words, that marks so many acclaimed docs today. But he does not have to, either. Bernstein is such a warm personality, and such an experienced and intelligent teacher, that listening to him talk — primarily about life, with music (which he calls “the language of feeling” and “the universal language”) being his way to get there — and listening to him play music is a pleasure in itself.

Admittedly, one senses that Hawke could go a bit further than he does. He gets a hilarious story out of Bernstein about a much-older suitor-of-sorts that he had long ago, and a better, moving one about his time spent touring the front lines while he served in Korea, but his hermetic existence, most apparent given his small one-bedroom apartment, is rife for unasked questions, even as Bernstein answers admirably about how music and teaching have helped him fulfill. Likewise, when Hawke himself is asking Bernstein about looking for artistic fulfillment in a commercial industry, the answers are a bit too pat, and although the direct answers likely satisfied Hawke, who got to spend much more time with his subject than we do, they play like over-determined mission statements — grand answers that are told rather than demonstrated.

Indeed, too much abstract talk about the function of art and fulfillment could bog the film down in impractical dime-store philosophy. More crucial to An Introduction than Bernstein’s personality, endearing as it is, is the music he plays. One need not listen to Bernstein and others waxing metaphysical about the spiritual powers of music to appreciate Brahms, Chopin, Beethoven, and Schubert as we hear them, all beautifully timed and synced courtesy of editor Anna Gustavi and mixers Timothy Cleary & Guillermo Pena-Tapia. It’s easy (and not entirely unfair) to contrast the anti-commercialist message of Bernstein and Hawke with the crowd-pleasing style and straightforward structure of the film, but those looking for an aesthetic and intellectual challenge have come to the wrong film. Those who simply wish to be uplifted and moved, much like the admiring faces of the attendees at the film’s end (count Mark Ruffalo among them), however, will be delighted.

Seymour: An Introduction is playing at NYFF and will be released by Sundance Selects.