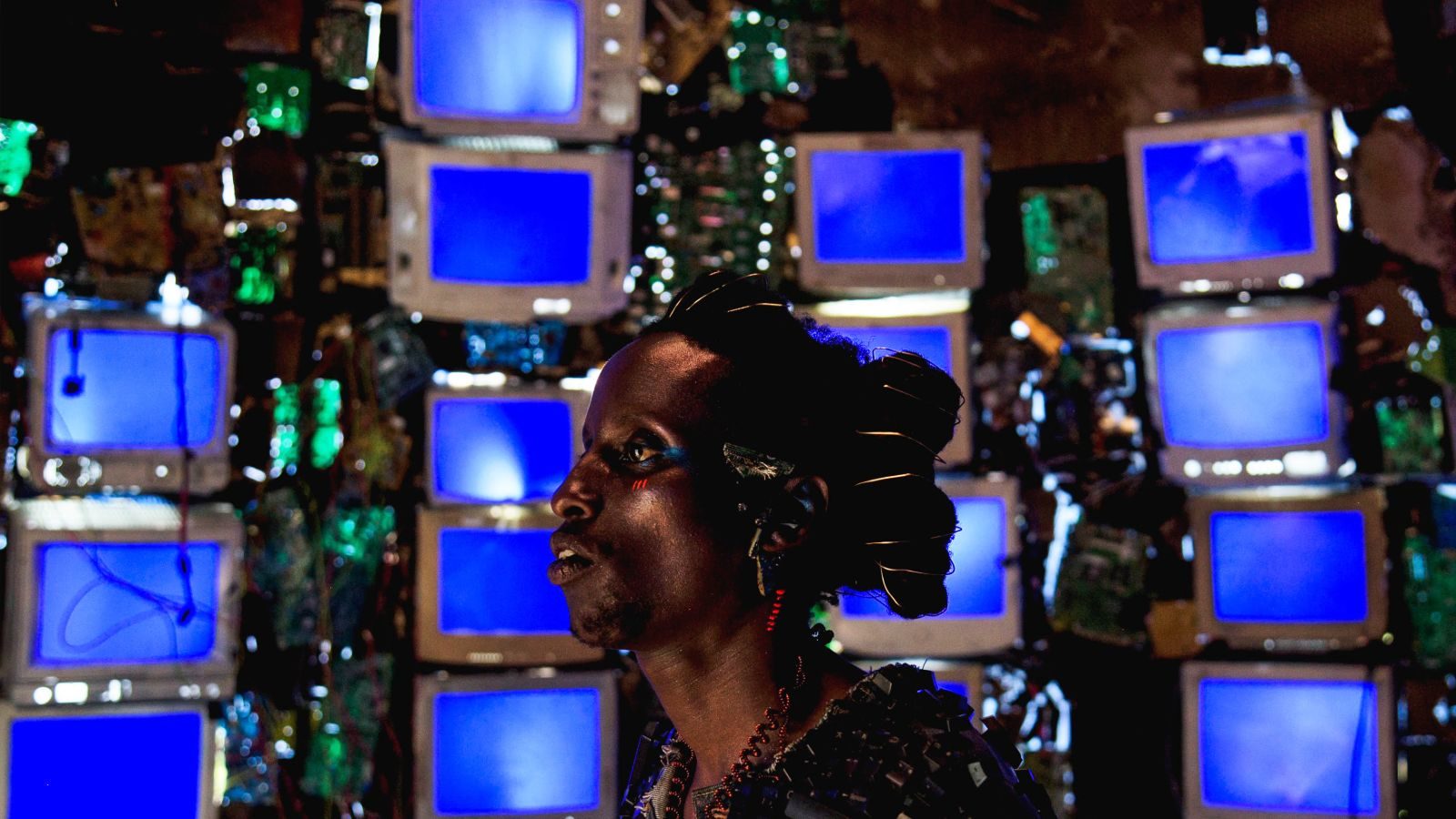 With his directorial debut, poet-musician-actor Saul Williams has no desire to hold back. Neptune Frost, a technology-focused musical set in Rwanda co-directed with Anisia Uzeyman, sees Williams put all of his previous artistic efforts into an unfocused, wholly singular work, one with splashy producers like Lin-Manuel Miranda and Ezra Miller. Following the intense, dream-induced connection of a coltan miner, Matalusa (Bertrand “Kaya Free” Ninteretse), and intersex, on-the-run hacker Neptune (both Cheryl Isheja and Elvis Ngabo), Neptune Frost has ideas to spare, pursuing all in the form an anti-capitalist, pro-connectivity movement.

Beginning as a Kickstarter project that raised nearly $200,000 from 1,500 backers, the film wants to galvanize and embrace its characters and viewers. It has an appetite for justice, communion, and change in the farthest-reaching of places. In this case that’s a makeshift village constructed by technological scraps, existing amidst a never-ending war. Matalusa, mourning the death of his brother at the mines, finds the spot with Memory and Psychology, two characters serving the greater good. Whatever that may be. In this version of the present—or possibly future; either would work—they wear jackets made of keyboards, don beads on their faces, and put wires in their hair, all in a fight against The Authority, an entity representing capitalism, power, repression, and control.

Neptune Frost uses music as energy, drifting in and out of its melodic elements as easily as its composer drifts between spoken word, hip-hop, rap, and electronica. These hackers sing about ignorance, binary crime theory, social media popularity, and the currency of all items. Williams and Uzeyman construct a world where people greet one another with the phrase “unanimous goldmine” in an effort to constantly pursue the excess of life, the unending progression of technological advancements.

The village is sparse for the protesters, filled with those discarded and abused along with similar scraps of unused hardware, led by Matalusa and Neptune in their shared desire to break the system. Williams and Uzeyman inject a soul into their film, having no qualms calling those in power “motherfuckers,” screaming “Fuck Mr. Google,” and using poetic songs as subsequent calls to action. Every moment feels like a call-and-response, an opportunity to participate in this movement, one readily accepting and fostering queerness, connection, and dreams.

The directors jam together a surplus of ideas, unable to sort through each one with time and care. Neptune Frost addresses the Black experience, fragile masculinity, the mirror-like quality of tech, Biblical parallels, the mineness of society, and current power dynamics with the government, only to name a few. They build a place where the abandoned and the broken contain a shatterproof potential, with people existing as conduits for energy, powering systems instead of destroying them. It becomes poetic science fiction, beautiful in look, color, and purpose.

With Ninteretse and the combination of Isheja and Ngabo in leading roles, Neptune Frost acts as a magnet, doling out belief and joy and introspection. The actors’ voices come from deep within them as they sing about issues and solutions, about the past, the present, the future. The songs don’t want to become showcases but rather a collective rising-up, a joint middle finger to those that live to oppress others. It grows more difficult to deny the overwhelming presence of and connection between Matalusa and Neptune and the actors playing them, mixing together to form bonds that burst with life, love, and spirit. They’re a window into Williams as an artist.

Williams and Uzeyman has made a work to discuss, to praise, to question, and to revisit. Neptune Frost has a quality of few films: pure, authentic creativity. It can be overwhelming, mudding up the actual narrative of a movie that coasts around genres, topics, and emotions. It confuses more than it explains. But none of that matters. It always has something important to say and a powerful way to say it.