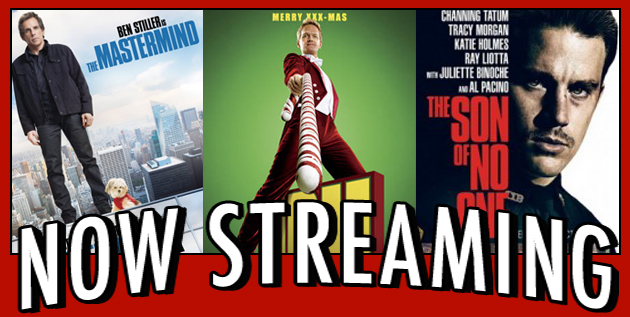 Each week within this column we strive to pair the latest in theatrical releases to worthwhile titles currently available on Netflix Instant Watch. This week we offer alternatives to Tower Heist, A Very Harold & Kumar 3D Christmas and The Son of No One.

Christmas comes early when your favorite stoners return to theaters to do box office battle with Brett Ratner’s latest wanna-be blockbuster and an indie thriller with as much angst as star power. Delhi Belly (2011) This blisteringly funny feature is like Guy Ritchie by way of Bollywood. But don’t fret those-who-fear-subtitles. Most of this flick is in English. Tashi, Nitin and Arup are three roommates who haven’t quite figured out adulthood. They share a crappy apartment and bicker constantly, but when the chips are down, they’re intensely loyal. So when Tashi’s fiancee accidentally entangles them in a diamond smuggling plot, the boys do whatever it takes (including a truly ridiculous robbery) to put things right. Seriously. See this instead of Tower Heist.

Archer (2010) In this whip-smart FX cartoon, H. Jon Benjamin lends his voice to Sterling Archer, a super spy with some major mommy issues. Each week Archer and his colleagues (the huge-handed but sassy spy Lana voiced by Aisha Tyler, the BDSM-obsessed secretary voiced by Judy Greer, and his smothering mother/boss voiced by Jessica Walter who played a similar figure on Arrested Development) tackle touchy subjects and espionage to craft a comedy series that is as hilariously off-color as it is action-packed. Season 1 is now streaming.

Charade (1963) For an action-comedy with a touch of class, try this classic pairing of Audrey Hepburn and Cary Grant. Hepburn plays a recent widow who is mystified when she discovers her husband’s secret criminal life. While being tenaciously pursued by three vicious men seeking a treasure she can’t divine, she crosses paths with a dashing but mysterious older man (Grant). Dare she trust him? James Coburn and Walter Matthau co-star; Stanley Donen directs.

They’ve been to White Castle and Guantanamo Bay, but now Harold & Kumar (John Cho & Kal Penn) are out to save Christmas. After accidentally burning down the family Christmas tree, the seasonally stoned pair takes to the streets of Manhattan to find a replacement, and run into a wild array of characters, including Neil Patrick Harris! 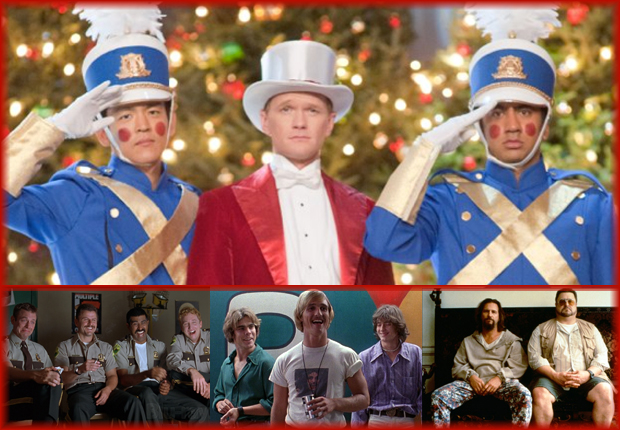 Super Troopers (2002) In Broken Lizard’s cult-comedy, stoners are not the heroes, but more the hapless stooges at the mercy of a batch of mustachioed cops who are less interested in serving and protecting and more into syrup and pranking. Jay Chandrasekhar directs and stars in this stoner comedy that is guaranteed to make you paranoid.

The Big Lebowski (1998) This wildly off-the-walls mistaken identity comedy follows the under-the-influence adventures of Jeff “The Dude” Lebowski (Jeff Bridges), who is pulled into a kidnapping plot that involves an esoteric Daddy’s Girl, a batch of nihilistic musicians, and a seriously high-strung bowling partner played by John Goodman.

When assigned patrol of his old stomping grounds, a promising young cop must confront the horrible secret he buried there long ago. Channing Tatum and director Dito Montiel (A Guide to Recognizing Your Saints) re-team for this New York City-set cop drama that raised eyebrows at Sundance. [Read our Sundance review here.] Insomnia (2002) Al Pacino stars in Christopher Nolan’s English-language adaptation of Erik Skjoldbjærg’s Norwegian thriller that centers on a police detective sent to a rural town to track down the merciless killer of a teen girl. But tormented by long days, sleepless nights and a clever killer who flaunts his crime, this cop is falling apart at the seems. Robin Williams and Hillary Swank co-star in the deeply disturbing drama.

Sleepers (1996) When a childish prank lands four friends in a demented detention center, they are put at the mercy of a menacing and perverse guard (Kevin Bacon). Years later, two of them seek their revenge for the abuse, leaving the others to take sides. Brad Pitt, Robert DeNiro and Dustin Hoffman co-star.

The Next Three Days (2010) Russell Crowe stars as a devoted husband and college professor, who is forced to learn the rules of a jailbreak after his wife (Elizabeth Banks) is imprisoned for murder, a crime she vehemently denies committing. Paul Haggis directs. Medicine for Melancholy (2008) Writer/director Barry Jenkins‘ made his debut with this indie gem that follows two African-American twenty-somethings on their awkward attempt to get to know each other after a drunken one-night-stand. While the premise might seem trite, Jenkins’ deftly balances sharp dialogue with genuine tenderness to craft a narrative that is deeply poignant, engagingly pensive, and punctuated by unforgettable and eloquent performances. Tracy Heggins is beautiful and allusive as a guarded young woman who refuses to be the manic-pixie-dreamgirl to Wyatt Cenac‘s (of The Daily Show) curiously compelling angry, lonely hipster. Together, these two frail but fascinating figures flit about a gorgeously captured San Francisco, coaxed on by an infectious soundtrack, to unfold a bittersweet story about the risks of romance that is impossible to shake. It’s the perfect movie for a rainy (or prematurely snowy) day. Check it out now, then brag to your friends about the great li’l indie they’ve shamefully never heard of.