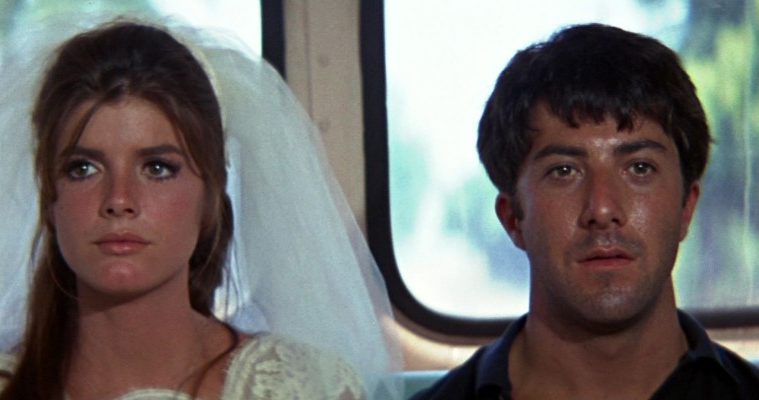 New to Streaming: ‘The Lovers,’ ‘The Graduate,’ ‘Person to Person,’ ‘Obit,’ and More Small-time private detective Tommy Akhtar (Riz Ahmed) has all the swagger of a hard-boiled snoop: leather jacket on his shoulders and cigarette in his mouth, leaning against London architecture in the darkened night. His office resides above some shops, he makes friendly with local convenience store owner Mrs. Elbaz (Myriam Acharki), and asks new clients where they found him because he’s not advertising in the paper. But while he’s good at his work and enjoys the struggle if only to get out of his father’s (Roshan Seth‘s Farzad) house when the old man starts using cricket metaphors to explain life, Tommy has yet to completely run away from his past. It is the “googly ball” of his life, a blind spot that’s never been more apparent until now. – Jared M. (full review)

A year after his debut, Who’s Afraid of Virginia Woolf?, Mike Nichols delivered this coming-of-age drama that was, well, one for the ages. Dropped into the fishbowl that is Benjamin Braddock’s (Dustin Hoffman, in his break-out performance) world, The Graduate is a flawlessly directed masterpiece that I’ve returned to again and again. With a haunting finale, if you have yet to seek it out, it’s now streaming. – Jordan R.

I Called Him Morgan (Kasper Collin)

Jazz trumpeter Lee Morgan was known for creatively challenging the likes of Dizzy Gillespie and Miles Davis on stage with his style and intensity, a youthful performer who surprised audiences by playing with utter confidence and maturity. For a time, he was considered one of the most important jazz musicians alive. His wife, Helen Morgan, was a forceful woman, who attracted attention with her good looks and delectable cooking. Her home became a hang out spot for struggling New York musicians who needed a warm meal after a rough night performing in the clubs. Morgan and Helen fell in love, becoming quick partners. When Morgan fell into heroin addiction, Helen saved him, pushing her man into rehabilitation. And later, she killed him, shooting him in the chest as he stood on stage, clutching his trumpet. – Tony H. (full review)

Writer-director Jim Strouse has been a Park City mainstay for many years, constantly delivering kind, nuanced pieces of work concerning modest people doing their best to figure themselves out. With The Incredible Jessica James, Strouse casts the uber-talented Jessica Williams as the titular character, an aspiring playwright getting over a bad break-up. – Dan M. (full review)

When a film is labeled as being a marriage drama, it is usually without question that it will contain some aspect of infidelity, and while The Lovers indeed begins with this premise, it presents the rather rare situation of “re-fidelity.” Featuring superb performances from Tracy Letts and Debra Winger, writer-director Azazel Jacobs has assembled an impeccable ensemble, but his script doesn’t quite have the dramatic acumen to make his Terri follow-up much more than an amusing farce. – Jordan R. (full review)

Miss Sloane seems custom-designed to forever go in the dictionary to illustrate the definition of “political thriller,” so thoroughly does it fit all the expectations of that genre. Director John Madden cribs directly from the Washington, D.C. cinematic playbook, mixing handhelds and back-and-forth dialog cuts overlaid with omnipresent blue and grey color tones. It looks and feels less like a film and more like a feature-length pilot for a new TV series which happens to have a stacked cast. Said show would pretty much be Scandal, only without the mad deep state subplot and with characters who are actually good at their jobs. – Dan S. (full review)

On June 25, 2009, 70s icon Farrah Fawcett passed away after a long battle with cancer. Her obituary in The New York Times recalled her “signature flowing hairstyle” and the red bathing suit poster that first made her a star. It also mentioned her work in Charlie’s Angels and her marriage to Six Million Dollar Man‘s Lee Majors. It was a succinct, tasteful piece that bid farewell to a beloved celebrity whose death was, sadly, not unexpected. But as we learn in Vanessa Gould’s documentary Obit, the sense of calm left in the obituary department in the wake of Fawcett’s demise was quickly dispelled when news arrived that the King of Pop had died. Michael Jackson’s sudden death occurred at a time when the writers were getting ready to go home, and being The New York Times, the staff knew they needed to publish something that very day. Unlike Fawcett’s obituary, which was among the over 700 advance obituaries they usually have ready, Jackson’s had to be put together in a rush. – Jose S. (full review)

There are plenty of characters and there is plenty of New York City in writer/director Dustin Guy Defa‘s Person To Person, but the whole thing meanders all over without ever really settling somewhere that matters. Amongst the pack, we’ve got rag newspaper reporter Phil (Michael Cera) and temp Claire (Abbi Jacobson) awkwardly getting to know each other while they follow up on a potential murder case, involving a rich widow (a criminally-wasted Michaela Watkins). – Dan M. (full review)

Bryan Cranston’s Howard Wakefield seems to have a great life. He is a successful New York City lawyer, is married to a loving wife, has two teenage girls, and owns the ideal house. However, problems do lurk beneath his psyche and, before we could even get to know him a little better, he decides to disappear from his own life. He hides in the attic, where his family never really cares to go, and observes how his loved ones deal with his disappearance. – Jordan R. (full review)