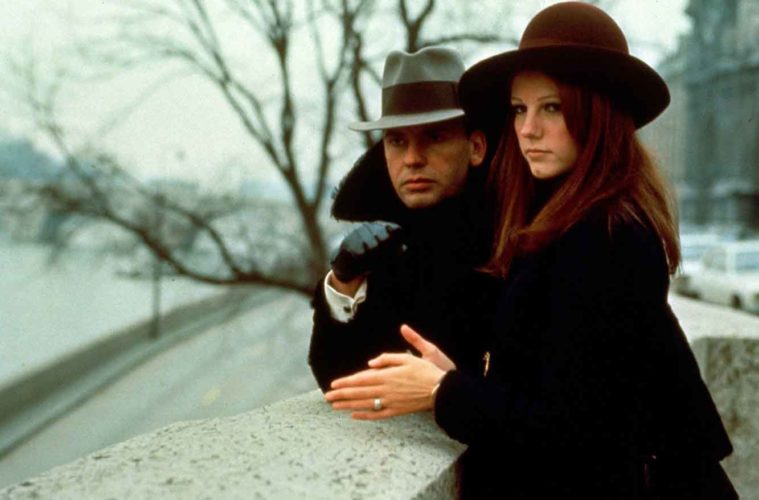 New to Streaming: ‘The Babadook,’ ‘The Conformist,’ ‘Norte,’ ‘What If,’ and More Conditions are ripe for a monster in Jennifer Kent‘s directorial debut, The Babadook. ThewidowedAmelia (Essie Davis) and her ostracized six-year old Samuel (Noah Wiseman) are the kind of people demonic entities love to prey on. Both Amelia and Samuel’s lifelines to the outside world are dwindling quickly. Amelia, still not emotionally intact after the death of her husband, is finding it difficult to cope with the rigors of suburban motherhood and her son’s erratic behavior. In a repeated visual, Amelia hovers high above her bed, lost in the horrific nightmare that marked both Samuel’s birth and her husband’s death, before coming down to a reality far worse. – Zade C. (full review)

Before I Disappear (Shawn Christensen)

Family can get us into trouble, but as we see in Before I Disappear, they can also keep us grounded. A drama peppered with black humor, this is the directorial debut of Shawn Christensen, based on his 2013 Academy Award-winning live-action short film titled Curfew. We find Christensen recycling two key elements of the short this time around: himself as Richie, and his character’s eleven-year old niece, Sophia (Fatima Ptacek). However, he also cashed in some chips and has an impressive supporting cast, including Emmy Rossum, Ron Perlman, and Paul Wesley. All of them make Richie’s life a hell he can hardly take anymore, and it’s where we initially find him, stalled out on life when he is thrust into being responsible.

Virtually unavailable here in the United States in decent quality since its release, Bernardo Bertolucci‘s masterpiece The Conformist can now be seen in more ways than one. A Blu-ray was just released from a restoration which premiered back in 2011, supervised by Vittorio Storaro and approved by Bertolucci, and now it’s available to stream on Netflix. The exploration of fascism features some of the most ravishing cinematography one will see in cinema, so turn down the lights and experience this one as soon as possible. – Jordan R.

Deep in the heart of Queens, NY sits an unidentified public high school that has seen better days. Designated as the school responsible for teaching the area’s most troubled teenagers, the school is staffed by a faculty that have all but given up on trying to make a difference and attended by students who have no plans for their future and respond to authority with verbal and even physical abuse. It’s the sort of environment that helps nurture feelings of hopelessness and despondency and its population has responded in kind. This is the environment that substitute teacher Henry Barthes (Adrien Brody) finds himself in when he accepts a month-long assignment to cover a Junior-level English class. – Jonathan S. (full review)

While it was far from a large-scale effort, Joe Swanberg stepped up his game with Drinking Buddies, marking his highest-profile film yet in both cast and budget; he recently followed it up with a Christmas-themed drama, one continued his knack for authentic characters. Starring Anna Kendrick, Melanie Lynskey, Mark Webber, Lena Dunham, and Swanberg himself, the story follows a woman who moves into her brother’s house following a break-up. – Jordan R. While Lav Diaz’s Norte, the End of History may not be easily classified or explained — it could be summarized in terms of basic narrative trappings, but not as far as intent or accomplishment are concerned — it conjures an intoxicating psychology, transplanting all of its socio-political concerns through the eyes of characters so wholly realistic that we feel we’ve actually met them. Diaz, whose works are known both for their langorous observations of very human systems and their overwhelming attention to spiritual / psychological details, has concieved a work as ambitious as any made by the humanist directors of yester-year. (Kenji Mizoguchi particularly comes to mind.) Drawing some of his inspiration from Dostoevsky’s Crime and Punishment, Diaz tells one encompassing story from three essential viewpoints, although the summation of these interspections are more thematic than narrative, introducing us to characters who wind up on different spectrums and on different receiving ends of various social pressures that exist within the Phillipines. The film’s extensive running time — upwards of four hours, and with nary a shot or moment I can imagine cutting — and Diaz’s own distinctive, hypnotic visual style — long master shots and intuitive relocations of space — do make Norte something of a challenge, but it’s been a long time since a filmmaker rewarded with so much in exchange for our patience. – Nathan B.

A few brain cells short and a handful of years too late, The November Man arrives in theaters, the longtime passion project of former James Bond player Pierce Brosnan, as directed by veteran filmmaker Roger Donaldson. Brosnan plays Peter Devereaux, a beaten-up and turned-out spy who just can’t get out of the game. Early on, tragedy strikes at the hand of his most promising protege (Luke Bracey), and the rest falls to retribution and the idea of ‘making it right.’ – Dan M. (full review) A sort-of counter-balance to Steve McQueen’s 12 Years a Slave, The Retrieval is the story of Will (Ashton Sanders) on the run from, and in collaboration with, white bounty hunters in 1864, a year before the end of the Civil War. Starkly photographed by Yasu Tanida in grays and light blues with a sense of dread, Chris Eska‘s drama is the independent counter-narrative, becoming a chase film in mode of a psychological drama. The film is subtle at times, yet provides an intense depiction of internal destruction, betrayal and sacrifice. – John F. (full review) The failure of the new Teenage Mutant Ninja Turtles is not a result of irreverence towards the original source material, but rather a lack of curiosity and imagination concerning that promising title it’s cashing in for name recognition. When Kevin Eastman and Peter Laird first debuted their pizza-eating, crime-fighting heroes, that wacky moniker was designed to capture late-night b-movie zaniness and comic-book earnestness. Initially assumed to belong to the schlocky ranks of spoof material like Attack of the Killer Tomatoes or The Toxic Avenger, TMNT soon distinguished itself by being every bit as out-there as the premise demanded. – Nathan B. (full review)

Although its title may be generic, War Story provides a refreshingly specific, restrained story of loss and recovery in the boundaries of battle. Following Lee (Catherine Keener), an American photojournalist living in Sicily who is dealing with the aftermath of an undisclosed traumatic event, not many answers are doled out upfront. Considering the reason for Lee’s current, seemingly dire situation isn’t revealed until the last act of the film, one has to give credit to director Mark Johnson for his steady approach, even if oversteps its welcome. – Jordan R. (full review)

What If (Michael Dowse) There is something relatable to the awkwardly genuine smiles of two introverts connecting with an acquired humor, made funnier by the fact everyone around them doesn’t get the joke. And for Wallace (Daniel Radcliffe) and Chantry (Zoe Kazan), that’s exactly the case — the only problem is that she already has a boyfriend. Through and through a Canadian production, from director Michael Dowse to screenwriter Elan Mastai to the playwrights of Toothpaste and Cigars, which he adapted (T.J. Dawe and Michael Rinaldi) to composer A.C. Newman (of The New Pornographers fame) to the setting of the same Toronto, Ontario streets I walked before my screening, What If is a quaint bit of real life infused with the usual rom/com quirks. – Jared M. (full review)

Revenge of the Green Dragons
When the Game Stands Tall

The Last of the Unjust
Manuscripts Don’t Burn
Moebius