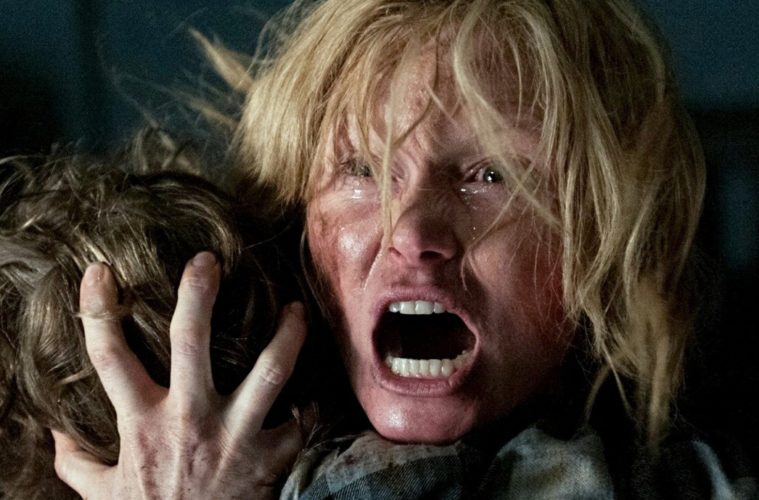 New to Streaming: ‘The Babadook,’ ‘Hot Fuzz,’ ‘They Came Together,’ ‘Paddington,’ and More After working with Woody Allen, Noah Baumbach, Sam Mendes, Ben Affleck, and more, the perpetually employed Chris Messina has gathered a wealth of knowledge behind the camera, culminating with his assured directorial debut. Premiering at Tribeca Film Festival, Alex of Venice is an honest portrayal of the aftermath of a crumbling marriage. Coming to the end of their ten-plus year relationship, workaholic Alex (Mary Elizabeth Winstead) learns that her husband (Messina) needs time apart, seemingly frustrated at himself with his recent role of “housewife.” – Jordan R. (full review)

Conditions are ripe for a monster in Jennifer Kent‘s directorial debut, The Babadook. ThewidowedAmelia (Essie Davis) and her ostracized six-year old Samuel (Noah Wiseman) are the kind of people demonic entities love to prey on. Both Amelia and Samuel’s lifelines to the outside world are dwindling quickly. Amelia, still not emotionally intact after the death of her husband, is finding it difficult to cope with the rigors of suburban motherhood and her son’s erratic behavior. In a repeated visual, Amelia hovers high above her bed, lost in the horrific nightmare that marked both Samuel’s birth and her husband’s death, before coming down to a reality far worse. – Zade C. (full review) Set in pre-Colonial times in New Zealand, Toa Fraser’s The Dead Lands follows tribal conflict between two factions that is both illuminating and frustratingly clichéd. A young chieftain’s teenage son, Hongi (James Rolleston), is caught in the middle of conflict between the other tribe’s chieftain’s son, Wirepa (Te Kohe Tuhaka), who is ambitious and trying to bring glory to his name. Why peace isn’t enough for him is never explored, so he stands as a singular-minded antagonist along with his cronies. When Wirepa attacks the tribe and slaughters them, Hongi is the only male left alive. Thus he begins to seek revenge, despite being vastly outnumbered and having no talent for battle. – Bill G. (full review) Writer/director David Oelhoffen has a special film on his hands because it’s powerful tale begs audience members to learn more about the subject. I’m not talking about the fictional character of Daru (Viggo Mortensen) secluding himself in the mountains to teach young Arab children how to read while civil war wages on or his unwitting ward of the state Mohamed (Reda Kateb) awaiting trial in Tinguit for murdering his cousin. I’m referencing the backdrop—where those mountains are and the “why” of the ongoing rebellion amidst them that spans two ethnicities, two languages, multiple races, and one common goal of freedom. – Jared M. (full review) Breaking the rules has always been something that Jean-Luc Godard seems to naturally gravitate towards. His latest film, Goodbye to Language, is no different, an acid trip into life, language, and the lunacy of the modern condition. The impressionistic use of 3D is reminiscent of the way he subverted digital technology with In Praise of Love during the advent of digital cameras, by shooting half of that film in black-and-white 16mm and the other in standard video format. Godard similarly uses different expressions and the third dimension to startling effects, like only a true artist who appreciates the complexity of the medium would. Bizarre, brazen and bold, it’s so refreshing to know that, at the age of 84, Godard has never felt more alive. – Raffi A.

Where to Stream: Netflix (Note: It’s only streaming in 2D, but a 3D version is available on Blu-ray.) With Edgar Wright‘s Cornetto trilogy now complete, looking back I’d name his middle entry as the most accomplished of the offerings. With razor-sharp editing and a number of iconic comedic beats, the adventures of Nicholas Angel (Simon Pegg) and his partner (Nick Frost) as they slowly unravel the mystery behind a seemingly quiet town is perfectly executed. Now available to stream on Netflix, make sure to give it a watch if you have yet to. – Jordan R.

With his own internet talk show interviewing a wealth of comedians, Kevin Pollak‘s affinity for the craft is clear, so much so he went ahead and directed a documentary about it. Misery Loves Comedy, which premiered at Sundance Film Festival earlier this year, explores the addictive nature of comedy along with the struggles and joys of the experience for what looks to be an all-encompassing look at the process. Featuring Jimmy Fallon, Tom Hanks, Amy Schumer, Jim Gaffigan, Marc Maron, Judd Apatow, Lisa Kudrow, Larry David, Jon Favreau, and many more, it’s now available to streaming. – Jordan R. If only for containing two of the best live performances in film history — those being “Life During Wartime” and “This Must Be the Place (Naive Melody)” — would it be reasonable to give this a place. But Stop Making Sense is, somehow, more than great renditions of great songs by a great band. Just as Talking Heads were there to do one thing and one thing only, Jonathan Demme makes the crowd an almost entirely absent presence in sound and sight; removing any barrier that would have previously existed, he’s essentially forced viewers to be overpowered with the group’s throbbing New Wave sound and David Byrne‘s logic-defying energy, the latter of which actually comes to be transported through the screen like some psychic force. Even those who don’t care for their music are sure to have this unfortunate character deficiency corrected by the end, with songs entering your mental rotation for weeks, months, or maybe even years to come. – Nick N.

They Came Together (David Wain)

The subject of well-deserved lamenting, we’ve seen a number of films subvert or subtly ridicule Hollywood’s generic romantic comedy genre, but the parody to end them all has arrived with They Came Together. In an era where much of the spoof genre simply lazy repeats scenarios, David Wain‘s latest comedy brilliantly and hilariously deconstructs every aspect of the genre to provide one of the funniest films one is bound to see this year. – Jordan R. (full review)

Where to Stream: Amazon Prime, Netflix

A stunningly beautiful film, director John Curran‘s Tracks traces the physical and psychological 1,700-mile trek of Robyn Davidson (Mia Wasikowska) from the central Australian town of Alice Springs to the Indian Ocean. As masterfully shot by Mandy Walker, the film has images that, at times, are lucid, while its structure and Curran’s direction takes little risks. Inspired by an award-winning 1980 account (expanded from a National Geographic article published in 1979), Tracks allows us to share a journey that shaped Robyn, an awkward young woman who survived in Alice Springs doing odd jobs in exchange for a camel. – John F. (full review)