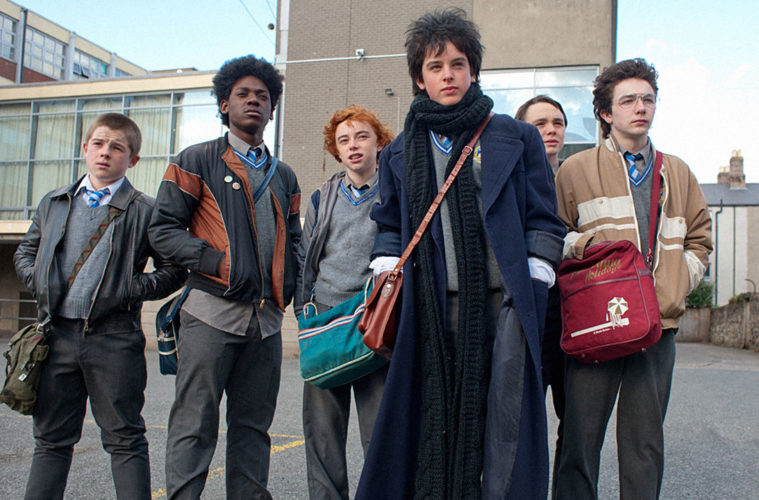 It all begins with Once Upon a Time. Such a simple introduction for Belladonna of Sadness, a 1973 Japanese animated feature whose newfound legacy includes a decades-long disappearance, a dramatic re-emergence, and a growing reputation as a frenzied, pornographic freakout. The final entry in anime elder statesman Osamu Tezuka‘s erotic Animerama trilogy has remained largely unknown to even the most die-hard cult cinephiles, a fate determined after its commercial failure bankrupted Tezuka’s production company, Muchi Films. That explains why the psychedelic feminist fairy tale fell by the wayside as similar X-rated animated contemporaries, including the T&A fantasies of Ralph Bakshi, lived on to titillate and traumatize poorly supervised video-age kids. Nearly two years after being acquired by Cinelicious Pics, this Aquarius Age curiosity returns in all its fully restored, 4K glory to reclaim its rightful place as a cultural artifact whose explicit themes still resonate today. – Amanda W. (full review)

A young woman in a small Kansas town survives a drag race accident, then agrees to take a job as a church organist in Salt Lake City. En route, she is haunted by a bizarre apparition that compels her toward an abandoned lakeside pavilion. Made by industrial filmmakers on a small budget, the eerily effective B-movie classic Carnival of Souls was intended to have “the look of a Bergman and the feel of a Cocteau”—and, with its strikingly used locations and spooky organ score, it succeeds. Herk Harvey’s macabre masterpiece gained a cult following on late-night television and continues to inspire filmmakers today. – Criterion.com

Lobbing the proverbial one up for dissatisfied critics to knock out of the ballpark, Drake Doremus’ Equals is a love story set in a dystopian future where emotions, it would seem, have been scientifically obliterated. The latest film from the Like Crazy director is not really lacking in emotions — quite the opposite if anything — but it is, quite frankly, a bit dull as it plays out in a near constant melodramatic key. – Rory O. (full review)

Regardless of one’s budget, a well-executed, smart idea can sell science fiction films on the smallest of scales. With seemingly little resources, the writing and directing team of Rania Attieh and Daniel Garcia attempt to put that to practice in H., a character-driven, but narratively obtuse sci-fi film that vexes more than it satisfies. This isn’t to say a confounding experience isn’t appreciated to stretch our minds in the genre, but H. simply doesn’t feel fully formed, keeping us at a narrative distance from its otherwise relatable characters. – Jordan R. (full review)

While perhaps not presented in a stylistic manner friendly to most Vulgar Auteurists, the film manages to pull off a hat-trick of comparisons to the movement’s deities. The rough-and-tumble cyborg mayhem recalls John Hyams’ Universal Soldier pictures, the final fight of hundreds of indistinguishable robot cronies is inevitably similar to a recent Paul W.S. Anderson film, and — even if not capturing their pure energy — there’s song-and-dance number featuring multiple robot clones that can’t help but make one think of a similar sequence from Neveldine/Taylor’s excellent 2009 feature Gamer. – Ethan V. (full review)

Where to Stream: Netflix and Netflix

This year, Mad Max: Fury Road dominated the conversation about challenging patriarchal values and the ways that human values can be corrupted, but Deniz Gamze Ergüven’s Mustang is an exploration of social mores that’s just as trenchant, incisive, and visceral without ever needing the fantastical backdrop of a futuristic wasteland. Set in a remote village in Turkey, Mustang pivots on the aftermath of one event that, to much of the world, may appear innocuous. It’s a demonstration of gender expectations in a micro context that expands into a heartfelt, angry, and telling story of freedom, individuality, and the sheer potential of these repressed women. But, like other culturally sensitive films (e.g. Jafar Panahi’s Offside), Mustang continually pushes back at the staid conventions of society while recognizing that these social dictates have their own complicated history. Erüguven never needs to resort to explicit finger wagging, for the gradual cloistering of these girls stands as the most persuasive argument. – Michael S.

Laura Bispuri’s moving, fiery Sworn Virgin comes in a recent tradition of cinematic meditations on gender as a form of identity like Tomboy and All About My Mother, but her film is, above all, about the privilege of access. For Mark (a revelatory Alba Rohrwacher), changing his gender identity was about personal freedom, but it’s not about self-expression or empowerment as much as a reflection of Mark’s need to conform to societal expectations in order to be recognized as a human being with agency. – Michael S. (full review)

Brian De Palma‘s third feature — which he co-directed with his professor Wilford Leachand and fellow student Cynthia Munroe — is technically his first as it was made in 1963 and released six years later. Also technically marking Robert De Niro‘s first performance, it arrives on streaming in perfect timing with our career-spanning series on the director.

I’m Not Scared
No Home Movie (review)
Boy
Greenwich Village: Music that Defined a Generation
I Don’t Belong Anywhere: The Cinema of Chantal Akerman
The Horses of Fukushima
0.5mm