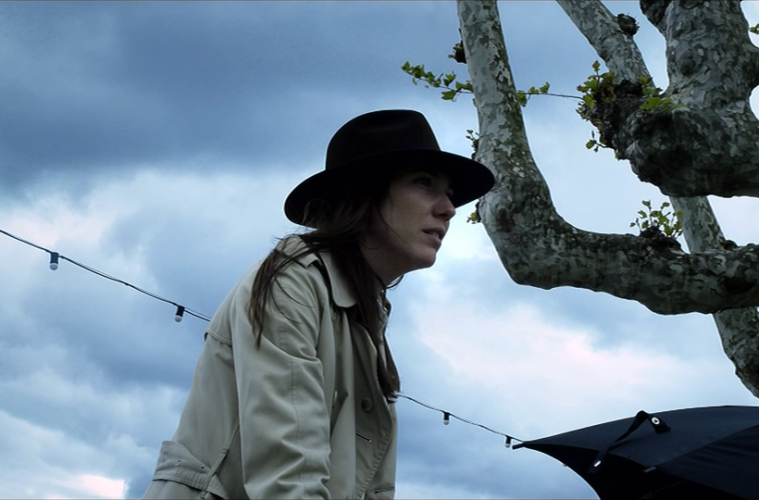 With a kind of quiet reserve, Big Eyes is a rare effort from the Tim Burton that plays it straight. The director wisely keeps the Burton-esque touches to a minimum, despite the temptation to explore the darker sides of Margaret Keane’s work, which appear to have influenced manga comics. The screenplay by Scott Alexander and Larry Karaszewski (known for their biopics including The People vs. Larry Flynt, Man on the Moon and of course, Ed Wood) also plays it straight as a portrait of a marriage missing the psychological punch of Keane’s paintings. – John F. (full review)

Going Clear: Scientology and the Prison of Belief (Alex Gibney)

If the bank of trustworthiness requires constant investment, Alex Gibney’s previous work pays dividends in what is his most challenging film to date, Going Clear: Scientology and the Prison of Belief. With a deep filmography that even the Church of Scientology have yet to find a flaw of veracity within, Going Clear is as thoughtful and carefully researched as it can be. To the extent in which this film can be called a hit piece, it’s not for a lack of trying to understand; perhaps the knowledge acquired within the church is difficult to parse out (including its creation myth), but Gibney and company were certainly exhaustive in their investigation. The church’s chairman, David Miscavige, appears in archival materials but declined an interview request, fearing perhaps a Frost/Nixon-style showdown. – John F. (full review) Breaking the rules has always been something that Jean-Luc Godard seems to naturally gravitate towards. His latest film, Goodbye to Language, is no different, an acid trip into life, language, and the lunacy of the modern condition. The impressionistic use of 3D is reminiscent of the way he subverted digital technology with In Praise of Love during the advent of digital cameras, by shooting half of that film in black-and-white 16mm and the other in standard video format. Godard similarly uses different expressions and the third dimension to startling effects, like only a true artist who appreciates the complexity of the medium would. Bizarre, brazen and bold, it’s so refreshing to know that, at the age of 84, Godard has never felt more alive. – Raffi A.

Where to Stream: iTunes, Google (Note: It’s only streaming in 2D, but a 3D version will be available on Blu-ray.)

The Kingdom of Dreams and Madness (Mami Sunada)

The fate of Studio Ghibli has remained uncertain since its co-founder Hayao Miyazaki announced his retirement last August. Since then, rumors have swirled, with reports claiming that the Japanese animation giant will keep going, while others, including statements from Miyazaki himself, appear more skeptical. But when Mami Sunada first stepped inside Ghibli in the spring of 2012, the studio was very much alive and in the process of creating more of its signature hand-drawn work. Sunada’s documentary The Kingdom of Dreams and Madness follows the parallel productions of Miyazaki’s The Wind Rises and his partner Isao Takahata‘s The Tale of the Princess Kayuga, two films that would punctuate the end of an era, along with the forthcoming When Marnie Was There. – Amanda W. (full review)

Clive Owen has the right figure and face for a world-weary medieval knight, but twice now he’s ended up in period action thrillers more grueling than the Middle Ages themselves. It’s been over ten years since Owen played the titular hero in Antoine Fuqua’s stubbornly flat spectacle King Arthur, and now he returns to deadly-but-principled warrior mode as Raiden, the sullen bruiser at the heart of Kazuaki Kiriya’s Last Knights. Although it’s surely been intended to cash-in on the current boom in bloody swashbuckling adventure, Knights is entirely the wrong kind of throwback. The plot hearkens back to sagas of Old Hollywood, and the production values seemingly suggest something opulent and absurd in the vein of the late 80’s, but the completed project has lost its way and most specifically reminds one of those bland, abandoned fantasy films that seemed to just materialize from nowhere on video-store shelves in the late 90’s. – Nathan B. (full review)

While it’s not the most perceptive film exploring the diversity of the lesbian experience, Life Partners has several insightful comic moments that ring true. The story follows Paige (Gillian Jacobs), a straight environmental lawyer and her BFF Sasha (Leighton Meester), a receptionist-musician who has recently gone through a breakup and finds it difficult to navigate the smallish lesbian community of the unnamed city they reside in. (Which appears from the production design to be in the Pacific Northwest, although I later learned the film was shot in Los Angeles). A sense of place and community is relatively important with regards to cultural experience and one’s ability to float; some cities are sink or swim, others have a lot of floaters like Sasha. – John F. (full review)

An interesting choice was made on Jack Bryan‘s film The Living—one that occurred before the camera rolled. If you’re familiar with Fran Kranz‘s emotionally fractured science nerd Topher from Dollhouse and Kenny Wormald‘s coolly confident Ren from the Footloose remake, you’d probably have a pretty good idea of who would play who inside a plot dealing with an abusive husband and the sheepishly insecure brother-in-law wrestling with the desire to hire a hitman to kill him. For whatever reason—and this is to the filmmakers’ credit—the opposite proves true. While Kranz’s capacity to earn our sympathy via guilt shines through whenever his Teddy’s attempts at charming battered wife Molly (Jocelin Donahue) into forgiving him fail, all remnants of Wormald’s cocky dancer have been replaced by a surprisingly effective turn as the apprehensive Gordon. – Jared M. (full review)

That the consensus choices for favorite trilogy — from Lord of the Rings and Star Wars to Three Colors and Before… — are most often defined by their overall shapes is a sign of how we even begin to conceive of and appreciate these things. One story comes to be seen in conjunction with the other (and the other[s] before or after it) because what we’ve been dealt — saving a kingdom, defeating an empire, charting intimate experiences with and through intense empathy, or riding the love rollercoaster — is so big, much more than any single film should be asked to encompass. That they’re so big is why many even care in the first place, and how they’re able to string things along a continuum — to retroactively imbue even the first moments of the first film with the crucial feeling that things must continue — is often what ultimately cements them as achievements in people’s minds. But then there’s the Grim Family Saga, writer-director Hal Hartley’s label for a series comprised by Henry Fool, Fay Grim, and Ned Rifle. – Nick N. (full review)

The saying “it is what it is” comes to mind when describing Taken 3. While that’s certainly a cop-out in film criticism, unlike the thrillers that promise thrills and don’t deliver, Taken 3 (aka Tak3n) is an enjoyable enough popcorn picture. Liam Neeson is, of course, back as Bryan Mills, doing what he does best: kicking ass and taking names. Here he constantly outruns (i.e. resists) the L.A.P.D. and because he’s white Bryan is not shot on sight. – John F. (full review)

The final film I saw at this year’s Sundance was also perhaps the best. Running under 17 minutes, Don Hertzfeldt‘s latest animation is an exceedingly brilliant odyssey into the outer reaches of a future universe that channels our inner anxieties of loneliness. The story concerns Emily (Winona Mae), a young girl, who meets her future self in the variety of an adult clone (Julie Pott), as the latter guides us through the bleak destiny that lies ahead. Bursting with creativity and hilarity, it’s a profoundly affecting piece of work that demands to be seen. One can also read my interview with Hertzfeldt here. – Jordan R.

The Devil and Daniel Webster