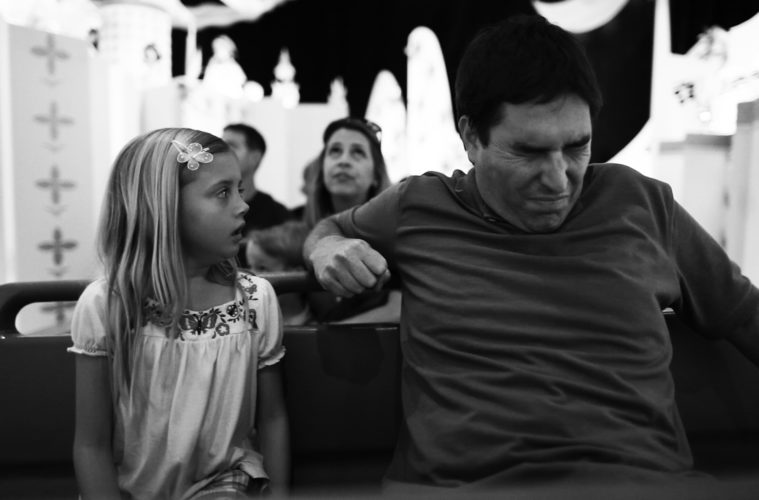 New to Streaming: ‘Escape From Tomorrow,’ ‘The Way Way Back,’ ‘Starbuck’ & More James Wan’s summer horror movie, The Conjuring, has all the accoutrements we expect–the declarations of truthiness, a beleaguered family under spiritual attack, and long, gracefully rendered scenes of people sauntering around in the dark while something damp and clammy silently glides over their shoulder. Unlike previous features, Wan is in full amusement park mode for this particular haunting and his performers are ready to exercise—or is it exorcise?—their considerable acting chops. – Nathan B.

Easily one of the strangest films at this year’s Sundance festival was the audacious and provocative Escape from Tomorrow, a film shot guerrilla-style in both Disneyland and Disney World without the permission of Mickey Mouse. The premise is simple: on the last day of their family Disney vacation, Jim (Roy Abramsohn) is laid off from his job, which serves as a catalyst for a hallucinatory Disney experience. As the spiraling spectacle of madness becomes more bizarre, complete with memorable Disney rides getting demonic makeovers, Escape from Tomorrow delivers an engrossing take on what the family vacation represents in corporate America. – Raffi A.

For those, like myself, who hold the original Monsters Inc. as the real creative turning point for the studio—when their feel-good tales evolved from charming, innovative ‘kid’s films’ to unique, full-bodied all-audience adventures-–Monsters University represents an unfortunate downsizing of the bravery and imagination of Pixar’s early days. There’s very little in the first reel of this kid-friendly take on Revenge of the Nerds that’s likely to change your mind on that. – Nathan B.

Releasing next month is what looks to be your standard, run-of-the-mill Vince Vaughn comedy Delivery Man, but unlike a few of his recent efforts, there’s some promising source material at the center. Directed by Ken Scott, who returned for the DreamWorks remake, Starbuck follows a man who has spread his seed and finds out 533 children have been created from his sperm. A major hit in its native country of Canada, it’s now available on Netflix Instant for easy viewing before you contemplate heading out to theaters this Thanksgiving. – Jordan R.

A bleak work edging towards neo-realism, Sunlight Jr. takes place in a welfare state: a trailer park outside of Tampa. There aren’t full on revaluations about the mistakes each of these characters have made, instead they live life day-to-day. Some critics may consider this “poverty porn,” otherwise known as the uncomfortable look into folks living below the means of the film’s target audience (perhaps liberals in large cities, who enjoy great performances and good filmmaking). The barrier to entry that may face this film is that it’s by no means a feel-good experience, it doesn’t have a Christian message and it’s a bleak matter-of-fact look at how life keeps dealing certain people a crummy hand, relevant in any economy. – John F.

The Way Way Back, written and directed by Nat Faxon and Jim Rash, is the kind of independent film the Sundance Film Festival has become synonymous with: a widely-appealing, coming-of-age tale that takes place amidst a flurry of familial problems and quirky characters. And though this type of description has become a stigma for many a film that has premiered in Park City, Faxon and Rash are smarter than the clichés they are utilizing in this narrative. – Dan M.

The World Before Her (Nisha Pahuja)

If Nisha Pahuja‘s documentary The World Before Her is correct, India is at a very important crossroads in its history. Half the country is steeped in orthodox Hinduism with a conservative viewpoint on gender roles and life under God while the rest looks towards a future of modernization and equality with the Western world. Two spheres in direct opposition with no middle ground in sight, a war has begun raging between religion and freedom with young women caught on the frontlines. They’re growing up in a society without easy answers or consistency in public reaction where half a billion people are in staunch defiance to their beliefs no matter which faction they’re aligned. But while the nation is fractured on ideology, both sides are utilizing early enlistment tactics to win over their newest generation. – Jared M.