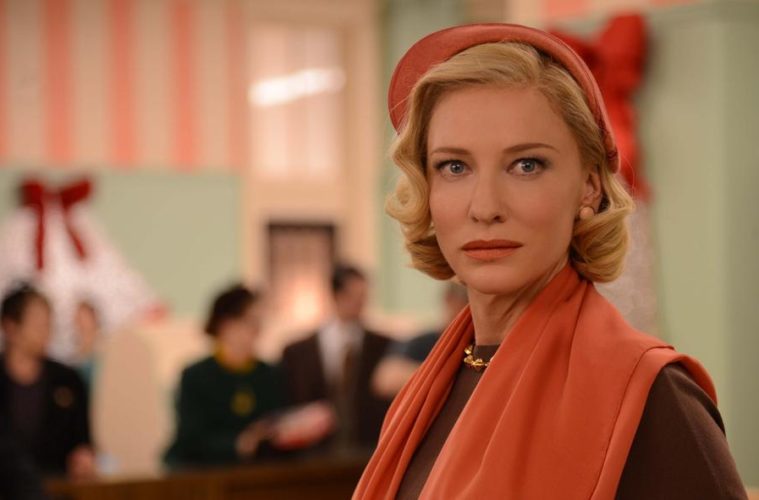 If you’re reading this, you’ve likely seen Ridley Scott‘s sci-fi feature Blade Runner, but I’d wager most haven’t seen every version. Netflix has now added the theatrical cut, noted for its voice-over and different ending, to their streaming services. While it’s general consensus that this one isn’t the best cut, if you wanted to see what audiences back in 1982 thought of the film, and perhaps why it wasn’t well-received initially, now you have the opportunity. In any case, one should see it in some form before Denis Villeneuve’s sequel arrives in early 2018. – Jordan R.

From the first note of Carter Burwell‘s magnificent score and opening shot of Edward Lachman’s ravishing cinematography — introducing a Brief Encounter-esque opening bookend — Todd Haynes transports one to an intoxicating world of first love and its requisite heartbreak. Carol excels at being many things: a romantic drama; a coming-of-age story; an exploration of family dynamics and social constructs of the time; an acting showcase the likes of which simply isn’t seen in today’s cinematic landscape — and that’s just on the first viewing. The film blossoms on further revisits as minuscule gestures and glances articulate a myriad of emotions, and as themes of male impediment and desire are subtly divulged. A harmonious, immaculate masterpiece, Carol is one of cinema’s finest love stories. – Jordan R.

Joe Swanberg keeps getting better and better. A few years ago, Swanberg seriously stepped up his game with his highest-profile film yet, Drinking Buddies. The filmmaking, structure, and acting is all polished in that film, and the same goes for the writer-director’s latest, Digging for Fire. Co-written by the film’s star Jake Johnson, this marks another step forward in Swanberg’s evolution as a filmmaker. – Jack G. (full review)

Perfectly timed with his recent 2.5-hour, career-spanning conversation with Marc Maron, one can now see William Friedkin‘s most successful film on Netflix. For the uninitiated, it follows a local priest and exorcist who attempt to cure a tormented girl. A massive hit upon its release, it’s one of the select batch of horror features that still can induce a great deal of fright today. – Jordan R.

Heart of a Dog (Laurie Anderson)

Heart of a Dog is essentially a highly personal and vaguely enlightening piece of video art that meditates on the life and death of the director’s dog Lolabelle. The affable terrier is the star. Anderson introduces her through a dream she had of giving birth to the dog — remembered in an odd comic book digital animation. Next we get a shot from the window of her Manhattan apartment, a view over the West Side Highway. Here we see the first of many segues into ponderings on post-9/11 New York. She recalls the white ash that covered everything when the towers fell in 2011 and the hectic disorder that followed. Seeking to avoid that “mess” and “noise” (her words) she took Lolabelle to the mountains in California. There she watched on as a hawk attempted to swoop down and attack the dog. Lolabelle escaped unscathed but apparently had a revelation. As Anderson sees it, it was as if she hadn’t considered the sky to be threatening before. You can see where this is going. – Rory O. (full review)

Arielle Holmes’ performance as Harley, the addict vagabond, lures viewers further into Heaven Knows What’s harrowing world. Although she’s surrounded by heroin addicts, squalor, and violence, we sense that her environment isn’t the source of her addiction. Instead, Holmes taps into Harley’s steadfast romanticism and naïveté in a complicated performance. In one of the film’s most compelling sequences, Harley challenges her dealer to front two days worth of drugs immediately so she can achieve something of a super-high. It’s a devastating but seductive moment. Further complicating our reading of her work, Holmes’ acting is informed by her real life outside the film. Her recollections of addiction and time on the streets formed a book which then became the foundation for the Safdie’s kinetic and potent film. The result provided an opportunity for Holmes to channel her natural talents, her mystery, and her life’s experiences. We hope that acting and filmmaking will remain a positive outlet for this young, tortured talent, so it’s good news that she can next be seen in Andrea Arnold’s American Honey. – Zade C.

Brian Helgeland’s Legend is by no means high art, but it proves the point that a film doesn’t have to be that in order for us to immerse ourselves in its criminals. And immersed by Tom Hardy we are. Like watching James Dean, for two-plus hours we’re obsessed with his every movement, tick, and mumble — his physicality is spellbinding. Whereas in last year’s The Drop his physicality was wooden, dull and empty, here it’s overflowing and we still want more. It’s the type of performance that can either make surrounding mediocrity seem exactly that, or it can drag it up above the surface; luckily, we get the latter. – James K. (full review)

If you’re a studio planning a bit of counterprogramming for the juggernaut that is Star Wars: The Force Awakens, a raunchy party comedy with Tina Fey and Amy Poehler seems like a pretty clever play. At a starry-eyed first glance, Jason Moore‘s Sisters does indeed appear to contain the right kind of crazy for audiences hankering to see Fey and Poehler together again on the big screen following Baby Mama. Outside of a few amusing cameos and the genuine, earnest energy of the two leads, Sisters unfortunately falls short of its pedigree and talent. – Nathan B. (full review)

Paradoxically but not surprisingly, the filmmaking ban on Jafar Panahi has garnered him more attention as a director than he experienced during his first stint as a director — that is, the legal one. Nevertheless, the restriction of his art has led to superficially thematic similarities in his three films since the ban, all of which have to do with that ban itself. Still, to characterize the stark, probing This Is Not A Film alongside the urgent, depressing Closed Curtain and the lively, humorous Taxi is unfair. The legal situation of their maker aside, the films have little in common; reflexivity and transparency in production have long been mainstays of Iranian film. As such, Taxi should not be seen as a novelty or experiment. (And, unlike its predecessor, it really isn’t; it is overlooked more because of distribution models than anything else.) What we have is an illuminating meditation on cinema – what it is and can be, how it is nurtured and fostered, how it is distributed and recognized and treated, what powers and capabilities it can manifest – that uses its transparency and Panahi’s restrictions to further its case. Far from being blunt or didactic, as could so easily be the case, it continues to explore and complicate a constantly growing slate of issues. – Forrest C.

Over the past decade, Norway has managed to out-Hollywood the thrill-happy American film industry by producing their own big-budget spectacles. Works such as the 2010 found-footage oddity Troll Hunter, the 2009 dark horror comedy Dead Snow and its uproariously gory sequel, Dead Snow 2: Red vs. Dead, and the 2013 action-adventure film Ragnorak recall the finer qualities of big domestic blockbusters, only with the extra cinematic advantage of pristine, breathtakingly photogenic scenery. Now comes Scandinavia’s first-ever disaster movie, The Wave, which is also notable for its director, Roar Uthaug, AKA the helmer behind the forthcoming Tomb Raider reboot. Based in his past credits, including the alpine horror film Cold Prey and the period thriller Escape, Uthaug is no stranger to crowd-pleasing genre fare, and his latest showcases his knack for utilizing familiar, tried-and-true tropes. – Amanda W. (full review)

Where to Stream: Google