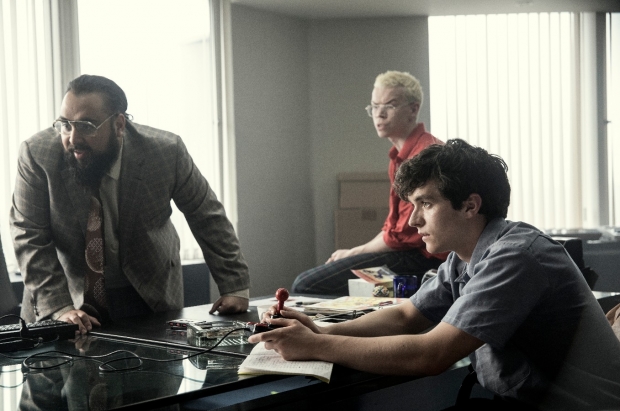 After toying with the mortality of its ensemble in every single film across its now 10-year franchise, the Marvel Cinematic Universe has finally reached a point of no return. Another decade’s worth of teases would only further dilute each life-threatening set piece, and so just as the sweet kiss of death will come for us all, it, too, must come for our costume-donning stars. This being a Kevin Feige/Russo brothers production, however, it’s not all grimace-laden battle cries and dour squabbles. Rather, Infinity War, with its now meme-famous descriptor as the “most ambitious crossover event in movie history,” offers ample space to revel in numerous superhero meet-cutes. Shooting character introductions with more bombast than most of the action, this is a blockbuster that knows its audience’s history with these heroes and effectively pulls all the behind-the-scenes strings to orchestrate the most operatic impact. – Jordan R. (full review)

Netflix has finally entered territory that seemed like a no-brainer for the streaming giant from the start: a choose-your-own-adventure film. They’ve also done it with the ideal series, Black Mirror. Bandersnatch, directed by David Slade, follows a programmer (Fionn Whitehead) in the 1980s who is developing a new–you guessed it–choose-your-own-adventure videogame, all while dealing with his own increasingly meta demons. Having gone through one iteration (then restarting and fast-forwarding to get to some more variations), the experience has its thrills even it can ultimately feel quite gimmicky. It also must be said that Steven Soderbergh covered this territory far better in Mosaic recently, which unfortunately didn’t seem to get a fraction of the press that Netflix’s latest release is accruing. – Jordan R.

Discussing the ways in which fiction films shift between their linear, wholly narrative impulses and something approaching ethnography is among the most illuminating aspects of movies so deeply tied to a specific time and milieu. En el Séptimo Día, written and directed by Jim McKay, is particularly upfront about this. Near the beginning of the film, a set of onscreen text locates the events of the narrative as Sunset Park, Brooklyn in the summer of 2016, discretely divided into the days of a single week (beginning on Sunday) and the following Monday. With the sole exception of one shot — a cybercafé in Mexico — the movie never leaves this setting, exploring the seemingly endless maze of streets and the establishments and restaurants just off the beaten path with careful detail and an almost unerring eye. – Ryan S. (full review)

Despite all the self-conscious reverence, occasionally flat humor, and postmodern winking of the Wes Craven variety that the film could live without (though, as far as franchise reboots go, we could do much worse on all three counts here), surprisingly it’s this element of the original that Green and McBride seem to be expanding on the most with Halloween. The aesthetic aping and franchise callbacks that fans will be biting at the chomp for will be sufficient for them; the kills are plentiful and the splatter sticky, meanwhile Green and cinematographer Michael Simmonds do excellent work with the widescreen frames, using all kinds of background/foreground tricks as well as reflections and shadows—a tracking shot sequence with Michael going through multiple homes, the camera sometimes following and then losing him is unbearable to watch and there’s an inspired motion sensor sequence is that is very impressive in terms of lighting and cutting for Green’s first horror feature. –

The recent surge of a particular brand of arthouse horror, favoring tension- and character-building over blood-fueled gonzo insanity, has found at a home in A24 with the likes of The Witch, It Comes at Night, and even Yorgos Lanthimos’ recent features. Their latest in the genre comes with Hereditary, the directorial debut from writer-director Ari Aster, which–as the title suggests–is less haunted house horror and more about the terror tied with psychologically-taut familial relations. Not unlike Robert Eggers’ Sundance sensation, Aster displays proficient skill in eerie tone-setting, elaborate production design, and the type of scares that will leave a pervasive imprint on the mind, even if the underlying mythology gets over-complicated by the finale. – Jordan R. (full review)

Captured on cinema since it commenced, if a filmmaker doesn’t find a new angle in which tell the horrors of World War II, then it can perhaps seem like a futile effort. Agnus Dei, the latest film from Coco Before Chanel director Anne Fontaine, digs up such an example of a compelling, true story from Philippe Maynial. Its title, translated as Lamb of God from its Latin origin, most commonly refers to the sacrificial giving that Jesus offers. However, specifically in the Old Testament, it can refer to a person who succumbs to the punishment of sins without willing to do so, which is clearly where Fontaine more specifically draws from. – Jordan R. (full review)

You cannot talk about Sophia Takal’s New Year, New You (the fourth episode of Blumhouse Television’s holiday-themed Hulu series Into the Dark) without mentioning producer Jason Blum’s reaction to a Twitter storm in October that stemmed from an interview wherein the low-budget financier relayed an erroneous statement that “there are not a lot of female directors period, and even less who are inclined to do horror.” Blum talked specifically about how he’s offered pre-packaged projects to women in the past who have turned him down—artists known for work that they’ve created themselves. So what about giving those filmmakers money to bring their own visions to life a la Jordan Peele and Get Out? What about betting on their creativity rather than a script already in his pipeline? Continue reading Jared Mobarak’s full review.

The Human Pyramid
Moi, Un Noir
The Night I Swam
Reminiscences of a Journey to Lithuania
Our Song
Jean-Michel Basquiat: The Radiant Child
Three Times