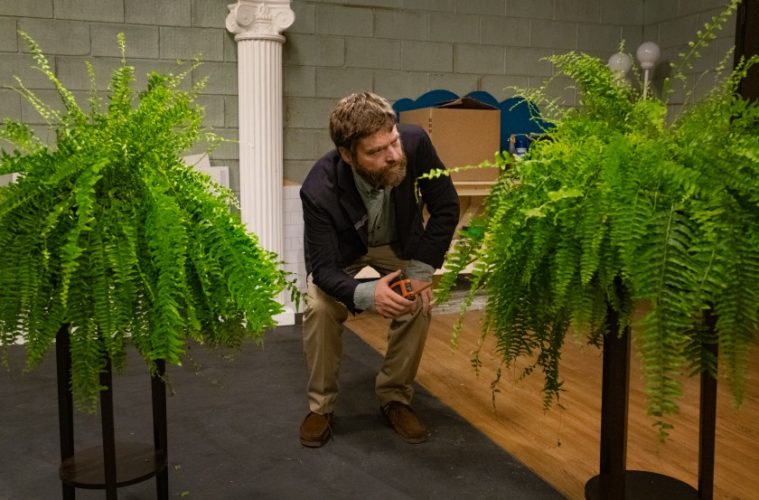 After ten years of web episodes, Between Two Ferns is staying on the internet–but it has expanded its format. Directed by co-creator Scott Aukerman, the Netflix movie Between Two Ferns: The Movie finds an entertainingly evil Will Ferrell sending Zach Galifianakis and crew on the road in a mission to capture ten episodes in the span of two weeks; failure means his show done and success will bring his very own Lifetime channel talk show. Part of the awkward charm of Ferns was having to sit through the cringe-worthy, insult-spewing interview for an uninterrupted five minutes or so at a time. That conceit is mostly disregarded here as Aukerman opts for a highlight reel-feel to the many, star-studded interviews. In return, the comedy falls a bit flat but there is still enough moments of amusement to garner a watch–and certainly stay for the entirety of the end credits, in which the film finally lets loose from its structure and tears-inducing laughter finds its way in. – Jordan R.

Joseph Kahn’s music video background has colored his relentlessly kinetic, blistering pop ADD filmmaking, one that is the closest the movies have ever gotten to resembling what the navigation of thoughts and spaces by the Extremely Online Millennial feels like—I, unfortunately, know this from experience. Bodied takes that style previously established in his post-postmodern teen slasher riff Detention a step further by situating it in the current discourse of identity politics; taking pot-shots at but also often considering the modern arguments surrounding free speech and performative wokeness. It sounds obnoxious and horrifying, and there are times where it is, but it’s also very clever and funny with how it both presents and digests the range of thoughts on the subjects (personally and politically), and ultimately Kahn uses it to draw a compelling formal ouroboros of how impossible it is to fully comprehend (and by conscious of) the consequences of your words but that that does not at all exempt you from them. – Josh L.

Satyajit Ray’s Pather Panchali remains among both the most accomplished of debuts and cinema’s most universally relatable experiences. Accentuating the basics of human emotions to result in the most complex of reactions, Ray’s subsequent trilogy of films follows the hardships of a Bengali boy as he passes into adulthood, a delicately powerful tale of transition that’s now been gloriously restored. – Jordan. R (full feature)

The mini-series centers on fictional ex-Michigan Congressman Jack Tanner (Michael Murphy) as a candidate re-emerged after leaving public office in the 1970s to run for the Democratic Party’s Presidential nomination. Tanner would be presented as interacting and be treated like a real-life candidate, Altman and Trudeau inserting him and his campaign at real primary locations and interacting with real-life figures — politicians, journalists, celebrities, and regular citizen– as though Tanner exists in the real world. There is no known direct political inspiration for Tanner and his political leanings (such as being a critic of the War on Drugs). “Think of Tanner not as a pretend candidate, but a novel kind of one. He does not mirror the electoral process and critique it, as we might suppose, but gains access to the workings of that process and physically interacts with it,” critic Gary Kornblau wrote in an essay for the mini-series when it was released on home video in the Criterion Collection. Through Tanner’s candidacy, Tanner ‘88 was about presenting the process, some of which is ripe for comedy and drama mined by Trudeau, Altman, and company. – Caden Mark Gardner (full review)

They Shall Not Grow Old (Peter Jackson)

Peter Jackson reinvents the wheel of the typically austere archival-footage genre in this absorbing salute to everyman troops of the First World War. Plundering the archives of London’s Imperial War Museum, which commissioned the film to commemorate the centenary of the armistice, he finds an outstanding array of images that encapsulate daily life for troops on the Western Front. The happy-go-lucky pluck of Tommies contrasts with rotting food, open latrines, and dreaded trench foot. But Jackson’s coup de cinema is to give these silent 100-year-old images sound and color, assisted by a team of lip-readers and voice actors that creates a dazzling, deeply humane spectacle. Overladen with moving testimony of those who came home–often to friends and family who refused to believe how bad the Great War really was–They Shall Not Grow Old is a document that expresses that it’s the truth of soldiers’ personal stories, not dates or historical events, through which we shall remember them. – Ed F.

In Welcome to Marwen, director Robert Zemeckis uses the real-life story of artist and photographer Mark Hogancamp as a fantastical canvas to interrogate his own career. Reckoning with one’s legacy is a move typical of an auteur operating in their “late period,” but Zemeckis doesn’t take a direct route to the self-critique. Instead, he papers it over a feature-length dramatic portrait of a subject who, like in his film The Walk, was previously the focus of an acclaimed documentary. Stilted and occasionally mawkish, Welcome to Marwen will likely be considered a failure by critics and audiences alike, which is a shame because, while certainly not a success, it represents a fascinating reflection on the double-edged value of escapism. – Vikram M. (full review)

Tom Harper’s Wild Rose is a film whose fixation on authenticity is directly at odds with its own craft. A corrective to the recent spate of self-absorbed superstar narratives, this is an underdog-musician story that’s appealingly as much about responsibility as sex and drugs, even as it’s repeatedly hamstrung by overly sentimental direction– a saccharine tone all the more disappointing given the strength of an alternately brittle and soulful script from TV veteran Nicole Taylor. – Michael S. (full review)

Bloodline
Liam Gallagher: As It Was (review)
Spider-Man From from Home (review)
Toni Morrison: The Pieces I Am