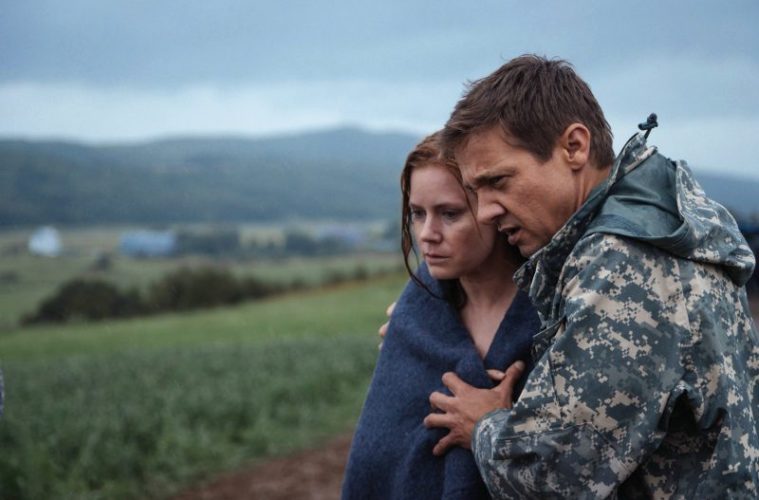 New to Streaming: ‘Arrival,’ ‘A Separation,’ ‘The Edge of Seventeen,’ ‘The Love Witch,’ and More

Despite a loose script that justifies little, Italian director Luca Guadagnino’s follow-up feature to his glorious melodrama I Am Love is a sweaty, kinetic, dangerously unpredictable ride of a film. One is frustrated by the final stroke of genius that never came, but boy was it fun to spend two hours inside such a whirlwind of desires, mind games, delirious sights and sounds. Based on the 1969 French drama La piscine (The Swimming Pool), the story essentially begins as Marianne (Tilda Swinton) and Paul (Matthias Schoenaerts) – a couple vacationing on an Italian island – get an unexpected visit from her former lover and record producer Harry (Ralph Fiennes), along with his daughter Penny (Dakota Johnson). Harry, a raging bohemian who still harbors affections for Marianne, and Penny, a confident Lolita-type who has her sights set on the hunky Paul, will make sure feelings old and new get kindled, leading to frictions that may end up being more than harmless. – Zhuo-Ning Su (full review) Here is a rare “film of the moment” that was as good as every bit of hype suggested. Asghar Farhadi’s fifth feature, his international breakthrough, was almost too good to be true, roving through scene after scene with an eye for every complication that comes with human quarrels and the intelligence to compact this messiness into a narrative that, in being at once deeply relatable and dictated by non-Western customs, made clearer the goings-on of a world many here would consider a threat. As sensitive as it is scathing, as graspable as it is insanely complex. We’re unlikely to see many endeavors that are this powerful in the next five years’ time. – Nick N.

Within the alien subgenre, there lies another. Therein, knowledge is treasure and the fifth dimension is love. The major rule: once the mystery and the chills have subsided, the revelations are enlightening and the welcomes warm. Thankfully, Denis Villeneuve‘s Arrival is more worthwhile than that. The film juggles a bit of world-building with meaty, compelling characters while trying to make linguistics look cool. No easy task, but the film does so in a breeze that feels light enough to digest (props to some stellar chemistry between its leads), yet brooding enough to resonate. With some brilliant editing and narrative structure, the result is perhaps more interesting to discuss than to watch — and it’s really, really interesting to watch. – Conor O.

Say what you will about comic-book adaptations and the like, but there may not be a genre more tired in Hollywood than the coming-of-age film. Thanks to their relatively cheap budgets and aims to connect with a pre-determined movie-going (though even that is up for debate) audience, many often feel like they are hitting checkboxes and not much else. Enter The Edge of Seventeen, which depicts teenage angst with such pinpoint accuracy one wonders why it’s never been handled precisely this way before. A debut no less, writer-director Kelly Fremon Craig‘s script — which never dumb downs or generalizes the high school experience — is brought to life perfectly by Hailee Steinfeld in an emotionally honest performance that even outpaces her break-out in True Grit. – Jordan R.

The major hindrance that Finding Dory must overcome is its choice of a protagonist. In Nemo, Dory (Ellen DeGeneres), an adorable blue tang that struggled with short-term memory loss, was a comedic sidekick. Her addle-minded lack of focus and boundless optimism served as both a barricade and boon in Marlin’s (Albert Brooks) search for his son. It was a character trait that created conflict but also lead to many triumphant moments of victory for the character and that story. Here, it becomes a major plot point — the driving mechanism of the entire story — and the focus of many, many conversations about respecting and finding value in disability. – Brian R. (full review) Yeah, the male stripper movie. Well, actually, no: Not “the male stripper movie” — a preponderance of lightly-clothed men dancing on a stage obviously notwithstanding — but a probe into what being a “masculine” man counts for in a day and age where dreams are hard to attain. Of course, Steven Soderbergh could not only make that kind of film under a major studio, but also convince hordes that Channing Tatum is a real star. The stripping’s pretty good, too. – Nick N.

The Nice Guys, Shane Black’s welcomed return to the detective genre, gleefully wallows in quips, twists, and punches, lovingly paying homage to hard-boiled fictional tough guys of yesteryear. It’s a film anchored by two shamelessly likable performances from Ryan Gosling and Russell Crowe, whose unexpected comedic chemistry makes for an incredibly rewatchable and entertaining experience. We have genuine fun in their presence, hanging out with the two of the world’s worst detectives as they stumble ever closer to a characteristically violent conclusion. The other star is unquestionably Black’s playful screenplay (co-written by Anthony Bagarozzi), which beautifully weaves the required elements of the detective movie formula around the peculiarities of its ‘70s Los Angeles setting. I predict that within ten years, we will have forgotten that The Nice Guys wasn’t the smash hit of summer 2016, as it clearly should have been. – Tony H.

It’s rare we’d offer a recommendation of a film we didn’t love, but the mere fact that you won’t witness any other film like Swiss Army Man in this calendar year — or any other, for that matter — makes it worth a watch. Affectionally dubbed the “farting corpse drama” at Sundance this year, it finds Hank (Paul Dano) on a remote island by himself after a boating trip stranded him. Seconds away from ending this desolate existence by hanging himself, he spots a washed up body on the beach, “played” by Daniel Radcliffe. I said in my review, “This set-up could easily make for one of the silliest, off-putting films that has ever graced Sundance — in U.S. Dramatic competition, no less — yet the directing duo bring an unexpected layer of emotion to the story, even if it ends up getting eventually repetitively muddled. As Hank and “Manny,” as Radcliffe’s corpse is later dubbed, progress on their journey, themes of loneliness, isolation, true love, and more emerge.” – Jordan R.

War on Everyone (John Michael McDonagh)

Steering into the frame to the sound of ’70s rock music while giving chase in their muscle car to a fully-costumed, on-foot mime, the impeccably dressed, utterly corrupt police duo of Bob Bolaño (Michael Peña) and Terry Monroe (Alexander Skarsgård) initially appear to be running full-speed towards an even wackier version of the Starsky & Hutch movie we got in 2004. Audiences familiar with the work of director John Michael McDonagh (The Guard, Calvary), however, will know something else must be in store with War on Everyone, even if McDonagh himself has made no mystery of the slightly broader canvas he’s working on this time around. – Tomasso T. (full review)

Bleed for This
Gimme Danger
Ma
Youth in Oregon

The Films of Spike Lee

The Last Vacation
Come Have Coffee With Us
The Yakuza Papers 5: Final Chapter
Blue
The Last of England
War Requiem
Alexandra’s Project