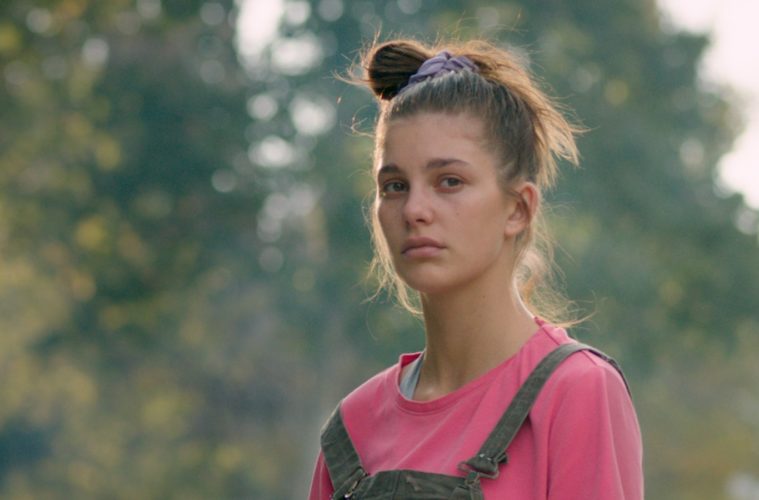 ‘Mickey and the Bear’ Review: A Father-Daughter Tale That Takes Pride in Authenticity

Set in the small Montana town of Anaconda, writer/director Annabelle Attanasio’s feature debut Mickey and the Bear takes pride in its authenticity. She was given a grant to conduct “ethnographic and visual research” into the community there so she could better understand its veteran population and close-knit history of helping each other cope with re-assimilation under increased financial, emotional, and psychological duress. Everybody knows everybody—a fact Attanasio uses to create a complex situational bubble around her lead character Mickey Peck (Camila Morrone). This is a teen facing the formidable crossroad of adolescence and adulthood. Smart, resourceful, and compassionate, she has the ability to escape via college if she can force herself to leave a veteran father (James Badge Dale’s Hank) who can’t be left alone.

Mickey’s position is hardly unique, but that shouldn’t discount the struggles she must confront to deal with it. When she picks Hank up from the police station upon realizing he isn’t home to eat breakfast, the sheriff tosses her the car keys out of routine as her father finishes telling the other officers an anecdote while alleviating his obvious hangover with coffee. They sympathize with the man because they understand the sacrifices he made and the bad luck earned as a result. If it’s not the bum leg and nightmares from Iraq keeping him down it’s the tragic circumstances surrounding his having to watch his wife die of cancer. So they also sympathize with Mickey, knowing the temper, lies, and pain she’s contended with as his sole caregiver. What would Hank do without her? Would those nice policemen still laugh after hauling him in with more than his own blood on his hands? If not for Mickey being there to come home to, he might not make it back. That’s a lot to put on a kid’s plate with graduation nearing since it ensures she and everyone else knows the difficult choice she must make about where to go next. The choices are these: Stay and look after Hank while starting her own family with Anaconda-entrenched boyfriend Aron (Ben Rosenfield), fully cognizant that it would mean never leaving. Or find a way to make college work. Run during the middle of the night if necessary to head west and relinquish the guilt he’s fostered in her.

Attanasio intentionally renders this father/daughter relationship into one marked by as much good as bad at the start. There’s no evidence of him physically beating her, but the psychological warfare used (whether intentionally or not) definitely proves enough for an outsider to justify emancipation if not for Mickey herself. This is the only life she knows. This is her connection to the mother she’ll never see again. And it’s initially sweet when Hank gets confused and calls her Vanessa (her late mother’s name) before fading to sleep. It’s evidence that his capacity for love remains despite his alcoholism too often hiding it beneath aggression and self-hating pity. Staying could therefore allow the hope of being his savior to remain—something that would completely disappear the second he realized she abandoned him. I don’t use that word lightly either. Mickey choosing a path for her own sanity may not be abandonment, but Hank will see it as such. This truth sets the film apart because we know very early that he isn’t going to suddenly have an epiphany and tell his daughter to live her life. He’s not going to clean his act out of fear because his warped mind has accepted her inevitable departure as one more reason to feel sorry for himself. It’s a rough direction to take because it admits that not everyone can be saved, but that’s the truth. This isn’t a fairy tale. Life is messy and people don’t change overnight. If Hank has refused assistance this long, nothing will cease his pain except death.

That’s why it’s so hard to even consider leaving. It’s why Mickey’s boyfriend has all the earmarks of being the spitting image of who Hank probably was when her mother met him. And it’s why the new kid in town from London (Calvin Demba’s Wyatt) is so appealing as a contrast to everything she’s ever known. He’s a musician who is passionate about art above a job that will only serve as the means to drink away his depression. He’s sensitive and kind—as far removed from the hunter-types ready to start a family in high school because their adult lives begin the second that last bell rings. Wyatt epitomizes hope in what she can become while Aron proves the avenue towards wasting that hope on her father. It isn’t fair, but who said it was? No matter how many people say they stuck with it and found the light at the end of the tunnel, that reality is the exception. While a town like Anaconda might pride itself on being there for each other because everyone is in the same boat, the casualties of their choices didn’t ask to go down with the ship. So don’t dismiss Dr. Watkins (Rebecca Henderson) as some pawn who’s here to be a roadblock and/or voice of sage advice. She may actually be the linchpin to this entire thing because she understands the life these veterans lead is one of management and sustainability while those led by the likes of Mickey have the potential to break free.

Those who’ve never needed it have no idea how powerful it is to hear someone say, “It’s okay to choose yourself.” We know Mickey enough to realize she’s done everything necessary to go on a moment’s notice even if her heart is screaming, “Wait.” Watkins isn’t giving her permission to do so as much as giving her permission to let herself do what she’s already decided to do. Morrone poignantly portrays this war within by always showing the sadness beneath each smile. Hers is formed by fear while Hank’s manifests from sorrowful regret. Dale is a force as he runs the full spectrum of emotions to reveal why he matters and why he must also be forgotten. Suffering is contagious and embracing relief can hurt just as much.