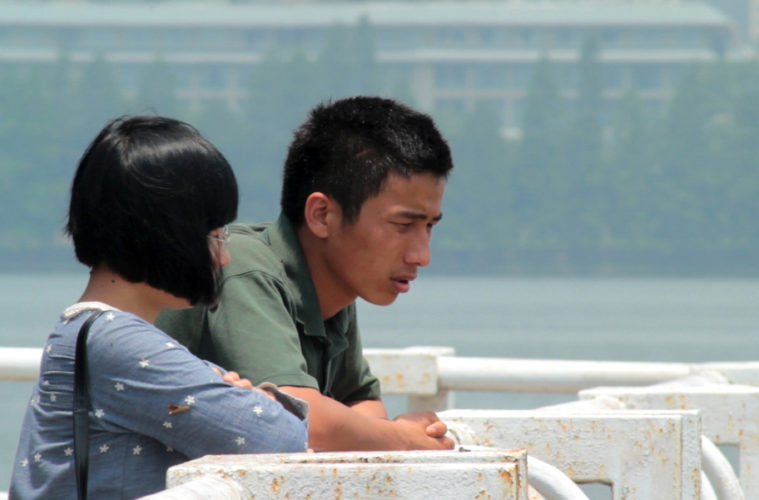 Luo Li Discusses His Self-Reflexive Cinema, Being Inspired By Robert Bresson, and More

Film culture’s classic binary; the big (blockbuster) or the small (Sundance drama) film, has become increasingly complicated over the past decade and a half. With the advent of technology that lets the cinephile see more, and the budding artist make more, it becomes easier to understand what a truly small film actually is. This can be further understood in the forthcoming retrospective “You Can’t Go Home Again: The Films of Luo Li” running from June 11th to 14th at the Bell Lightbox (see details here). Beginning with I Went to the Zoo the Other Day, the just-over-an-hour film depicts a day at the Toronto Zoo for two Serbian immigrants, their disembodied presence shifting through a chaotic public space of multiple visitors, languages and even the bored animals trapped behind glass or bars. Due to its production and budgetary constraints, it displays the kind of low-key formalism (one could even call it a “hang-out” film) that doesn’t often grab the attention of programmers and festival-goers, yet nonetheless reflects the kind of filmmaking that can still both capture the world around us, and render it completely strange.

Yet we shouldn’t be so quick to ascribe low stakes to Luo Li’s cinema, as in his following films he displays a tendency similar to the work of Lisandro Alonso, where often near the film’s end he’ll present a rupture that forces the viewer to rethink the arthouse modes they’d previously boxed the work into. While it can be just as easy to praise a film for its clever divergence as it is for maintaining an aesthetically “correct” determinism, in terms of seeing an artist’s progression, one in which genres and attitudes toward realism seem in a state of constant flux, it becomes a highly intriguing prospect.

The film that best exemplifies this being his following feature Rivers and My Father, in which he attempt to create a biography of three generations of his family through “adapting” his father’s memoir. This comes complicated in its last “act” though with the inclusion of an email from his father following his seeing a rough cut of the film. While his father openly admits to not completely understanding his son’s line of work in the first place, he doesn’t hesitate in calling in to question almost everything about the film; whether it be its anachronisms, elliptical storytelling or slow-cinema friendly length of its shots. In being forced to reconsider all the film’s images, it both presents his father as somewhat of a co-author, as well giving an admittance of being an imperfect work; the fruitless pursuit of both historical recreation and parental acceptance on equal plain.

Emperor Visits in Hell, which presents a pivot by surprisingly functioning as a deadpan comedy, is another adaptation of sorts; the legendary Journey to the West yet transplanted to modern China. Reconfiguring a few chapters into what’s ostensibly a quirky mob movie, through his trademark digital black-and white, Luo Li creates a stark yet off-putting atmosphere akin to the colliding realist/supernatural tales of Jacques Rivette and Apichatpong Weerasethakul — though the film abruptly ends with its lead actor Li Wen out of character and in a seemingly candid drunken state ranting about the state of China today. While perhaps some of the themes of the film will become more apparent for the uniformed Western members of the audience, it in some ways functions as simply the best joke in a movie already full of bumbling ghosts and mundane gateways to the underworld.

Initially promising to be his first true documentary, Li Wen at East Lake takes on China’s exorbitant capitalism again; this time through the prism of Wuhan’s famed East Lake being threatened by an encroaching urbanization. Though of course he doesn’t simply go the easy route of creating a simple polemic, as perhaps tipped of to the audience through simply its title; the star of his previous film probably isn’t going to be denied the chance to perform again. Playing both “himself” and a figure of authority, he’s asked to investigate the case of a local crazed person scaring off citizens with his stories of a man-eating dragon living in the lake; even that itself could be its own magical-realist exploration of Chinese folklore.

Luo Li’s body of work may still be rather small, but as recent retrospectives at the Lightbox dedicated to the similarly sized filmographies of Mia Hansen-Løve and Matías Piñeiro have shown, the promise of even greater things to come can be just as exciting as as a decades-long list of titles. Thus it was a great opportunity to discuss all this with him. The Film Stage: Sorry that I’m going to start off with a really general question, but how did you first get interested in becoming a filmmaker?

The title of this retrospective is “You Can’t Go Home Again.” Being that you’ve made films in both Canada and China, do you feel like you identify with one country more than the other?

I don’t know. I don’t think I ever consciously think about that question, but I think now I probably identify more with China again even after spending so many years in Canada. After making the last three films in China I felt that I reconnected with a lot of my friends here and my family here, I got to know more about what’s going on in China now. But I still spend a lot of time in Canada; I feel in Canada I’m still learning a lot actually. There’s still a lot to learn about Canada and I keep my eyes and my ears open. That’s why I feel I’m not really ready to make films in Canada at this moment, I feel I don’t know very well about it yet.

I live in Toronto right now and I feel like the city’s become less artist-friendly. The urban space of Toronto feels like it’s just all these condos and it’s very business-centric. Do you agree?

I agree actually, that’s happening everywhere. Toronto is probably not the worst city in the world in that respect, actually, but it is happening and I’ve seen that happen a lot in China for example. It’s normally done in a much more crude and cruel way. Toronto to me, relatively speaking, is not that bad actually, but I know what you mean.

Speaking of public spaces though, how difficult was your film I Went to the Zoo the Other Day to make? Did you shoot it guerrilla style?

It’s definitely guerrilla style and I didn’t get any permits. My crew was very small, we didn’t cause any problems for visitors. I think the whole crew including myself was no more than four or five people. We were just shooting other visitors, but we spent a lot of time there.

I think so much of what lends to that film is the sound that you capture; all this ambience, all these multiple languages.

Thank you, we just had one sound person, which was myself. It can be done though, because we did spend a lot of time there. We went there every weekend because my actors could only work on the weekend. So we’d go to the zoo every weekend and we spent maybe three or four months to finish the whole film, so over the course I managed to film a lot of stuff and record a lot of sound.

There’s this saying that every film is a documentary of its own making, do you feel that’s applicable to some of your films?

I mention that specifically because of the film about your father where you create these images, bring them into question and then even literally bring him into the film as a critique of sorts.

I was always very self-aware, to reflect on filmmaking as a process and as a way of telling stories, as a way to represent people. I see a lot of the time that that could be a problem potentially, and I do want to address that in my own films sometimes.

I think the idea you see in that film and the following film [Emperor Visits in Hell] is the difficulty or recreating period; in the former your father brings up the various anachronisms and in the latter you update Journey to the West to contemporary times. Is that something you’re conscious of? Because obviously it’s costly to do so.

It was a very conscious choice, even for Rivers and My Father, I purposely filmed it in that contemporary setting. I didn’t mind having cars or things in the shots because I feel that even when you try to recreate the past and no matter how hard you try, it’s still not the past. To me the truth probably lies somewhere else; you probably don’t really have to be so faithful to the past in terms of details. You can still create a connection to the past through other ways.

As part of this retrospective you’re introducing a 35mm screening of Robert Bresson’s A Man Escaped and I can assume that he’s an influence on your work. Can you name any other specific influences?

I was thinking of Apichatpong specifically during Emperor Visits in Hell, because there’s this sort of casual magical realism in it.

Yeah, you can say that. There’s this mythology in everyday life I guess.

For the last three films I did get funding from the Ontario Arts Council. It wasn’t very difficult but I wasn’t really asking them for a lot of money. I’ve managed to make my films with a very low budget; I work with non-professional actors, I have a very small crew, I try to do as much as I can myself. But for those who want to make bigger budget films I don’t think that funding will be enough.