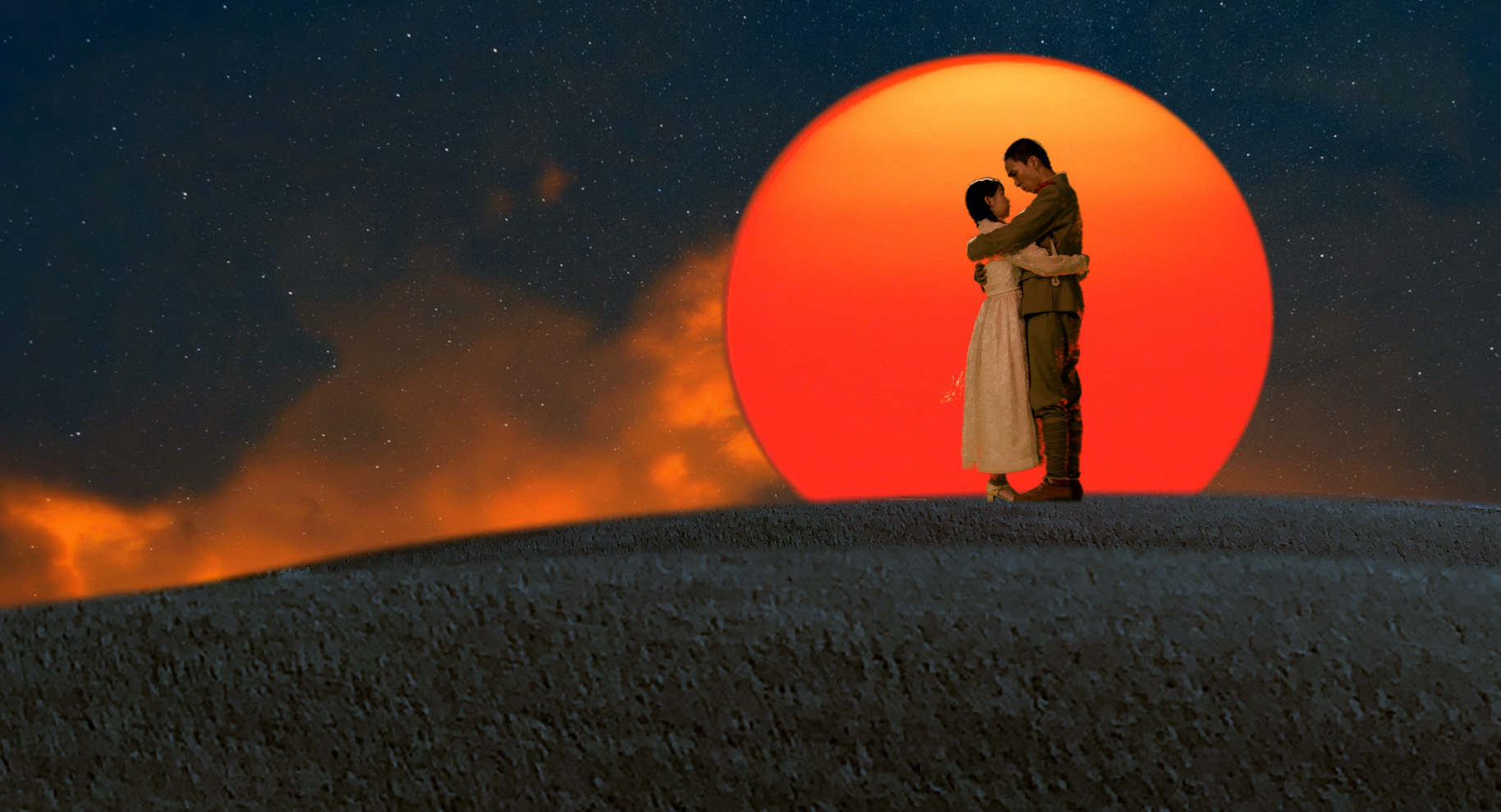 There are so many critical and theoretical entry points for discussing a film so dense as Nobuhiko Ôbayashi’s Labyrinth of Cinema that it’s hard to know where to begin. One could easily spend countless hours and thousands of words mulling over all the literary and cinematic references, tonal jumps, and stylistic eccentricities. But one thing’s certain above all else: this mammoth final effort by Ôbayashi, an artist who so often destroyed the conventional boundaries of cinematic space in works like 1977’s Hausu, is a completely humbling viewing experience.

Displaying an unmatched breakneck momentum, Labyrinth careens through key moments in Japanese history and parallel genre universes with the inevitable directionality of a boomerang passing through multiple worm holes only to circle back again. Stylistically, Ôbayashi uses rear-projection and green screen to turn the classic iconography and archetypes of Japanese cinema into a plastic digital space where characters exist on top of a glitching palate of prime colors.

Despite the frantic pace and bizarre narrative structure, Labyrinth of Cinema always stays true to its central (and hopeful) theme that film as a medium can change the world for the better. “You’ll experience time lags in this movie,” says Fanta-G (Yukihiro Takahashi), the sunglasses-wearing narrator who descends to Earth from his spaceship to visit a Japanese theater playing films for the last time. Audience members fill the seats as he watches from the back, quoting poet Chūya Nakahara and spouting off one-liners that are part riddle and part prophecy.

Three of those patrons––self-righteous critic Hosuke (Takahito Hosoyamada), love-struck cinephile Mario (Takuro Atsuki), and dashing Yakuza wannabe Shigeru (Yoshihiko Hosoda)––find themselves beamed into different time periods and genres, becoming the active participants in Ôbayashi’s whirlpool of sound and fury. Whether it’s traversing feudal Japan and samurai battles or dodging a barrage of bullets in multitudes of war sequences, these three men bear witness to the ironies, atrocities, and happenstances of history. Along the way they try (and mostly fail) to save the lives of women like Noriko (Rei Yoshida) and Kazumi (Riko Narumi), who come to symbolize the film’s endless circularity.

Still, this is by no means attempting to recreate factual events in any sort of realistic way. Ôbayashi’s overtly artificial visual scheme seeks to drown the viewer in vibrant hues and melodramatic bursts of action and prose, giving life to the contradictory creed (“There’s truth in a lie!”) that repeats throughout the film.

Labyrinth of Cinema’s most moving moments come after the onslaught of sword battles and brazen escape attempts. The doomed love affair on Okinawa’s sandy beaches mirrors Japan’s self-destruction at the end of the Pacific War, while a traveling theater troupe prepares a theatrical rendition of Rickshaw Man in the days leading up to the bombing of Hiroshima. In all these scenes the overlapping threads that have created a distinct fusion between cinema and history up to this point transform into something more centralized, the lone ghostly symbol of a girl turned atomic by trauma.

Nevertheless, Ôbayashi’s film always seems to be in a pleasant mood, indicative of a filmmaker at peace even while trying to plead for the audience to learn from mankind’s litany of misjudgments and power plays. That he does so in such a gracefully relentless way makes Labyrinth of Cinema even more jarring an experience, one far more enjoyable upon reflection than when you’re being thrust about mid-moment by its harrowing montages that fly by without a second to lose.

Labyrinth of Cinema is now playing at NYC’s Metrograph and will expand.