King of the Cruise Review: Searching for Empathy in the Lifestyles of the Rich and Famous 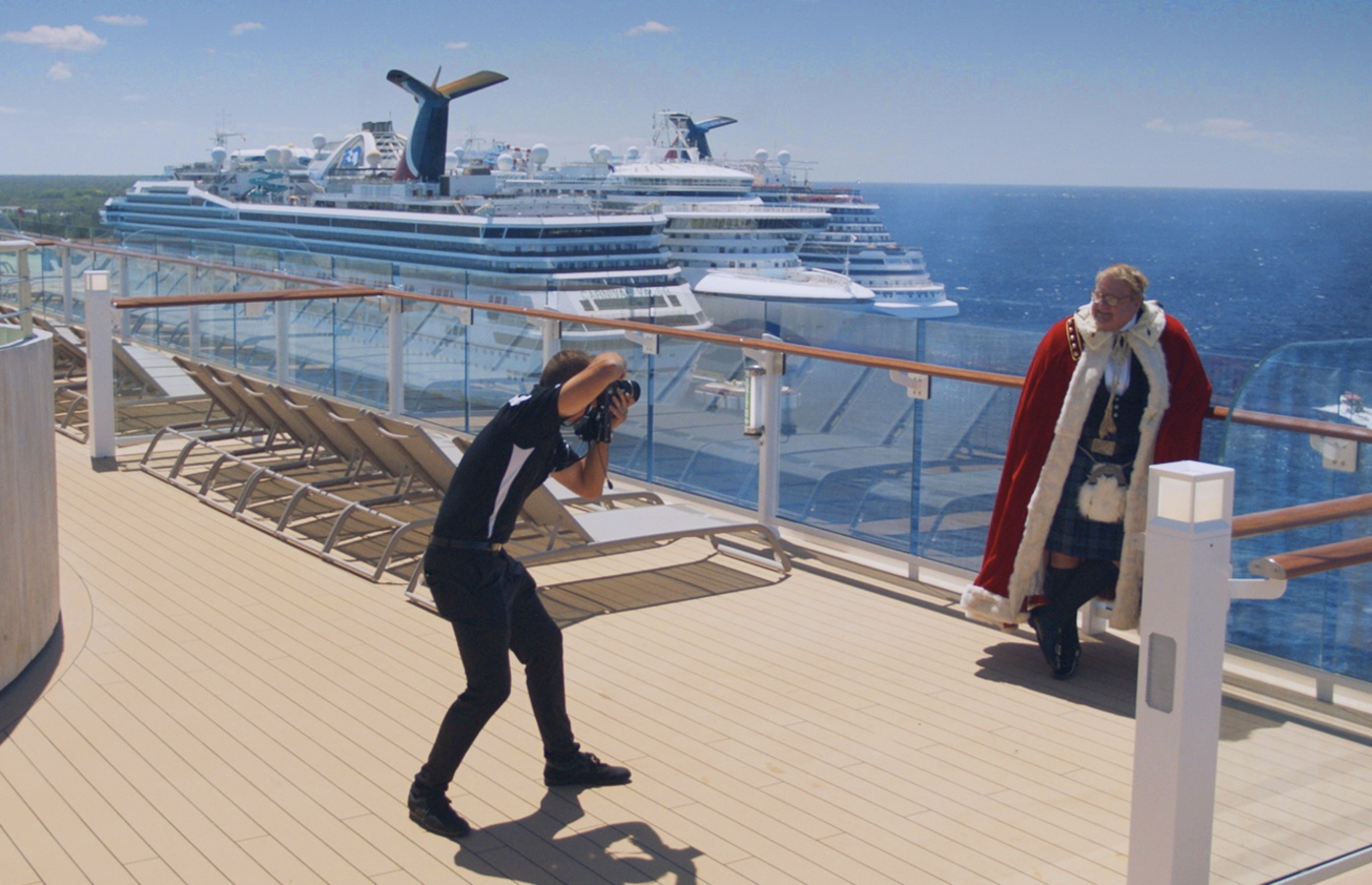 In the new documentary King of the Cruise, to put it in the simplest of terms, a king takes a cruise. This journey is a God’s eye tour of the Celebrity Eclipse: a daunting 17-deck luxury cruise-liner that, at full capacity, carries near to 3,000 passengers and 1,200 crew (note the ratio). The Eclipse, like many of its kind, offers its customers the opportunity to experience the confections of the one-percenter life, albeit for the right price. For our king this experience is a reality. Ronald Busch Reisinger (although he often prefers “Ronnie”) is the reigning Baron of Inneryne in Scotland (sc. 1998); the ceremonial king of Biffeche in Senegal; and, ostensibly, a proud kilt-wearing Scot who sounds very much like an American. He also claims to have once fallen off an elephant while playing polo. It is never exactly clear what to believe.

That unmistakable scent of The Con (and the rather more queasy fumes of the pseudo-colonialist) is the first thing we notice in King of the Cruise, the third feature from Dutch filmmaker Sophie Dros, and yet the film isn’t exactly here to dethrone anyone. Born in Amsterdam, Dros began making movies in 2014. Her early shorts focused on topics that she says have been misunderstood or even mocked in mainstream media: the potential for intimacy in a slave/master relationship (Rubber Romance), or between a man and his sex doll (My Silicon Love). She continued that M.O. with her first feature, Genderbende in 2017, which followed a group of non-binary teens in her hometown.

Behind its decadent facade, Cruise once again finds Dros looking for love in an unlikely place. Beautifully shot–as crisp and vibrant as Kodachrome–by cinematographer Boas van Milligen Bielke, Cruise is not short on style, although crucially never at the cost of its humanity. Dros begins her film as detached and fascinated as a butterfly collector, but then hones in on Reisinger’s loneliness, compulsive eating, and the emptiness of his money. (By the man’s own admission, he is dangerously overweight.) He at times comes off quite charming and modest, but he’s also a bragger and a bit of a flirt. Dros shows his interactions with other passengers: some seem quite enamored, but most grow wary and untrusting.

Dros teases the viewer into this uncertainty but still offers Reisinger enough one-on-one screen time–interviewed in his spotless suite–to keep him rooted in reality. How to consolidate these two sides proves the greater challenge: on one, the sniggering treatise on absurd luxury; on the other, Dros’ delicate and empathetic character study. At one point Bielke shoots Reisinger from far back as he chats up his pedicurist and struggles to get out of a chair–the distance of the camera seems lightly comic at first, then voyeuristic, then simply cruel. In another moment we are in Reisinger’s suite as he eats an enormous meal on his own–with Bielke’s camera intimately close this time, more sympathetic than pitying. The disparity is jarring.

Dros leans more into that empathy as her film progresses. (Ronnie’s description of how peoples’ reactions to him have changed over the years–from awe to vague and glazed over–is particularly poignant.) It would have been so easy to lampoon the man, with his silver-spoon upbringing and golden toupee–a hairpiece that proves all too reminiscent of another notorious rich kid with airs of nobility–yet Dros keeps her film defiantly on his side. Aesthetically, Cruise recalls the acidic detachment of an Ulrich Seidl project–part Safari, part Paradise: Love–but the likeness soon dissipates. That Austrian provocateur has always viewed humanity as some kind of alien race. Dros sees Ronnie as a human being–one who cuts a large and achingly lonely silhouette on the Celebrity’s soulless walkways. In the end, on some level, it’s difficult not to feel for him.

King of the Cruise screened at the Thessaloniki Documentary Film Festival and is now available digitally.