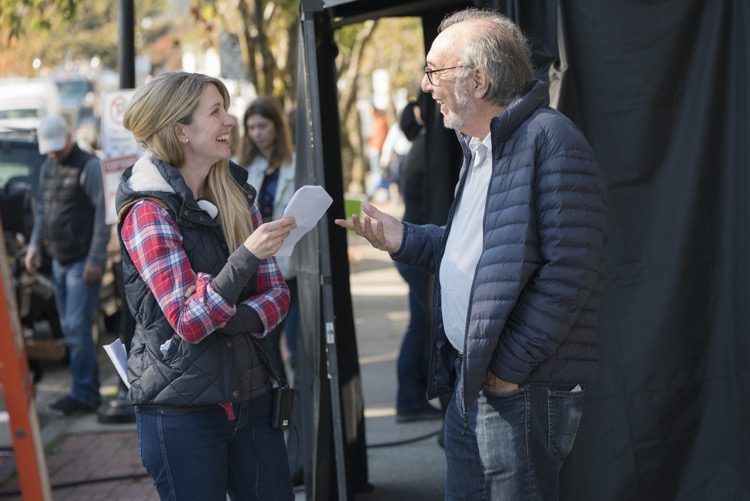 James L. Brooks Talks ‘The Edge of Seventeen,’ How to Best Serve a Movie, and Driving Jack Nicholson Crazy

Writer, director, and producer James L. Brooks has had the pleasure of producing some attention-grabbing debut films, including Say Anything and Bottle Rocket. The latest project Brooks felt compelled to support, The Edge of Seventeen, is the directorial debut of Kelly Fremon Craig, whose first produced script was the 2009 feature Post Grad.

The Academy Award-winning writer-director behind Terms of Endearment, Broadcast News, and As Good as It Gets, recently discussed Craig’s film with us, his approach to producing, and how to best serve a movie.

The Film Stage: The second draft of the script was what really resonated with you, correct?

James L. Brooks: It wasn’t even the second draft. It had a few ties to the first one, but we never looked back. I never had that experience before — we never looked back. We started hanging and talking and shooting. And I encourage research, and she’s remarkably gifted, Kelly, at drawing young people out, because she’s empathic and she means it. And we looked at the videos, and we’d talk some more. We’d talk about movies. And then this new script came in where, suddenly, a writer was born, and it knocked me out. It was awesome. And then we were in service to that script, both of us.

You’ve produced some great debut films. When you read a script, like in this instance, do you immediately think, “This is a voice I’ve gotta help get out there””

Not the first draft. The first draft I don’t feel that way at all. I felt something about her. And she did turn around at the end of our first, you know, sort of awkward conversation and say, “Nobody works harder than I do.” And it was the only totally non-awkward thing she said. And it was just the truth. And she was true to her word. And she found her voice. She’s really seriously talented. I’ve done this 3 ½ times. I’ve done it with Anderson, and I did it with Cameron Crowe, and I did Penny Marshall’s second film where she started to really express herself as a director. And it’s great.

What sort of environment do you think a writer-director needs to best express him or herself?

I think with writer/directors, and with the exception of Penny, everybody is a writer/director I work with, the thing is you’ve seen a movie in your mind, and then you go get it. But if you really want to do a movie, that thing has to move. That thing has to be open to change. That then goes into a team sport; finally, it’s a team sport. And you’ve got to learn that. And that has to do with how you relate to the key creative people around you—with your cinematographer, your production designer, your costume…which is important. And most important of all is the actors. This picture wouldn’t have gotten made unless Haley came. Wouldn’t have gotten made. I mean, not only financially we wouldn’t have made it because we didn’t hear that script work right with anybody else. And Kelly had seen on video what not…something larger than a thousand young women. If Woody hadn’t been passing through town and he wasn’t a pal of mine, and he didn’t agree to do it, the movie would not have gotten made. Kiera, at the end, the movie would not have gotten made unless she was going to do it. If we didn’t find Hayden, the movie would not be the movie it is.

The most humbling thing about movies is how many breaks you have to catch. No matter how much you prepare, no matter how good you are, how many breaks you have to catch. I’ve had it where I’d kill for one actor, kill for one actor. If I had gotten that actor, the movie wouldn’t have worked. That’s happened to me once or twice. But all you can do is serve the movie as best you can all the time and make sure it’s a good place for actors to come to.

You mentioned some of those conversations you had with Ms. Craig early on. What, specifically, did you discuss?

I think we talked about everything. And we, you know, we hung out. There’s a great acting coach that played a role in this picture, Larry Moss, where all the actors sort of spent some time with him for this picture, which was interesting. And we’d go and sit in the back of his class to find out how good he is and just get religion, you know, as somebody who is sort of a purist. And we’d have lunch with somebody who was great at their job who we couldn’t possibly afford, Hans Zimmer, who ended up helping us, as a matter of fact, with the score at the end. Richard Carr is one of the great production designers…

If a first-time filmmaker asks you for guidance, is there a piece of advice you usually give?

No. I think it’s supporting who they are, which is the fun for me. But I have definite ideas about trying to make the movie the boss and trying to serve the movie; I have definite ideas about that that come across at times. It’s hard to describe. I think moviemaking is very often telling yourself to keep the bad from happening. You know, like, “I’m going to do something good…” It’s just knowing when something is wrong and throwing yourself on every grenade that pops up. I always said to Kelly, you know, somewhere in the process, in a very casual way, because it hadn’t come up, you know, “You should direct this,” and it never changed from that casual comment. She just hadn’t done it. Even if you bake the résumé, she hadn’t done it. And she’s great at it.

What sort of problem solving is required on a movie like Edge of Seventeen?

We had crises galore in this. We had crises galore. And the worst thing that can happen in a movie is if anybody thinks your sense of crises is sort of silly. You know, “What do you care about the location that much? Come on.” And that’s the worst. The temporary insanity that that glass is important, more important than anything. I don’t care what’s happening out there, that glass is important. That temporary legal insanity is what moviemaking is. It’s the detail. Kelly and I are very similar in that regard.

There was a time when Hayden [Szeto] lost his character for a second and how he approached that. And the three of us have talked about it since. He was the… just God said, “I’m going to send this guy to see you very early in the process. He’s going to be perfect for the part.” And then in the making of it, suddenly, it had been a while, and he lost the character for a second and lost his own… but then he got it back just… we just showed him his audition and he said, “I got it.” And he kills. I mean he kills in this movie. It’s one of my joys of the experience to see genuine breakout happen.

When do you know an actor is right for a role?

Have you ever thought you just couldn’t make a movie without a particular actor?

When you are directing an actor who loses sight of a character or scene, how do you typically work through it?

I’ve had it in the extreme. I’ve had it in the extreme where it wasn’t happening day in and day out—the pressure is there. I think twice in my life actors have been replaced. And each time it was just nakedly wrong. And it’s your mistake, and it’s nakedly wrong. But the movie is the boss. And sometimes it’s tough. And sometimes the communication is tough. And the minute you are on the stage, the pressure, the distractions are enormous. But just to be honest with you, I don’t have it yet. A lot of these things is telling yourself the truth as you know it, as you understand it.

The story on As Good as it Gets, Jack was having the hardest time, and I couldn’t tell him… I didn’t know what it was that wasn’t happening. I was driving him crazy. And I’d say that picture would have blown apart if we weren’t good friends, that one day when he was having such an unhappy time, and I was having such an unhappy time. And the way he tells it, I kept on saying “too angry.” And then one day he blew up, and I said, “That’s it!” That’s the way he tells it. I don’t know whether it’s quite true. But one day I stopped shooting a half day in and knew that I was just digging the hole deeper. The crew goes home, and that’s a weird thing to do to send the crew home when you still have hours to shoot. And we sat on this enormous stage and talked for three hours. I have no memory of what we said. The next day everything was okay.

The Edge of Seventeen is now in theaters nationwide.