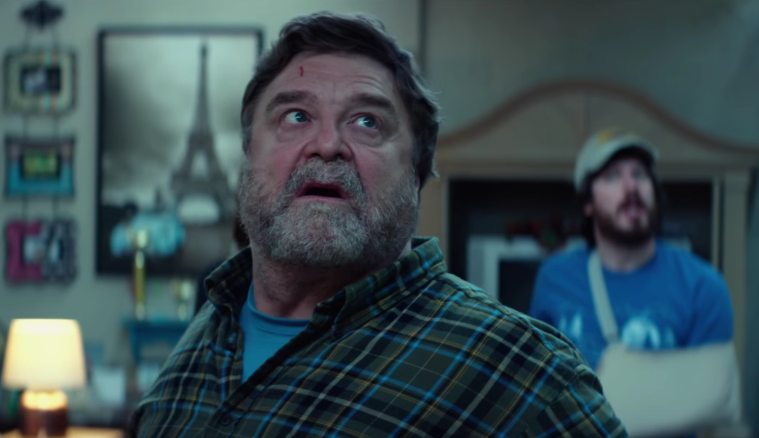 “Worth pointing out: There is no trailer for 10 Cloverfield Lane. Only teasers. And that was Paramount’s idea. Pretty damn cool,” director Dan Trachtenberg wrote on Twitter following the opening weekend of his debut. Indeed, one of the many pleasures of his film was the element of surprise. While the title itself perhaps spoiled what we might see by the end of the film (explore its original iteration here), Paramount did a fine job with its domestic marketing in ratcheting up the tension without giving us more than a few hints of the plot.

When it comes to the film’s international release, it looks like that secrecy has gone out out the window. Spoilers to follow, of course, as they’ve released a new trailer which shows off the alien presence in the last act, including a few major money shots. Perhaps most egregious of all is a poster hailing from Thailand (seen below), which shows Mary Elizabeth Winstead‘s character running for her life from the deadly green mist-spewing alien ship.

On one hand, we don’t doubt the extraterrestrial presence is more of a quick and easy draw with audiences across the globe, but we’d be interested in their reviews when they learn 90% of the film is more or less a one-location thriller, even if it is a riveting one. Check out the marketing materials below, along with a fascinating extensive chat with Trachtenberg for Jeff Goldsmith‘s Q&A podcast. Lastly, there’s some concept art (which shows off an unfinished deleted scene, in which Winstead’s character fends off one last creature attack as she drives away) from designer Raul Dominguez (via /Film).

If you missed it, listen to our in-depth discussion below.

Do you think the international marketing for 10 Cloverfield Lane has gone too far?