Hope Gap Review: A Marriage Story of Restraint and Nuance 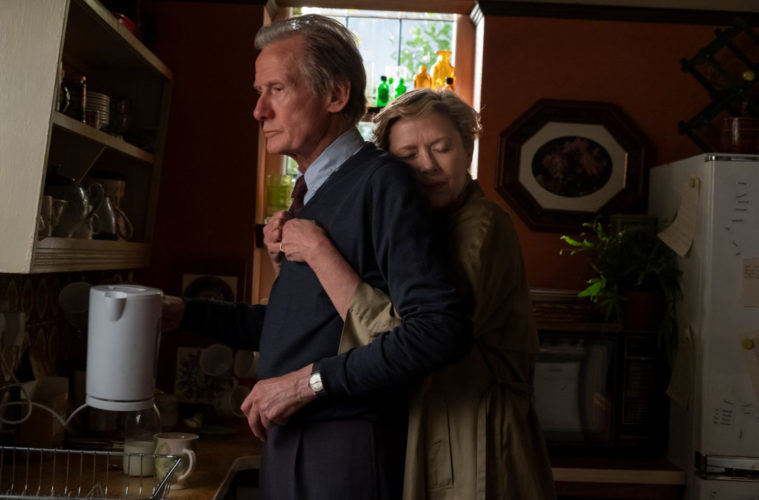 One person’s optimal drama isn’t universal. Just because you might like the explosiveness of Marriage Story and its emotional outrage doesn’t mean your friend won’t find its histrionics akin to an improv theater class. And just because they might like the more nuanced Hope Gap and its stiff British upper lip doesn’t mean you won’t be bored by what you believe to be generic characters rendered milquetoast to ensure neither comes off as a bigger villain. We all live different lives and we’re all affected by triggering scenarios differently depending on our own experiences. Rather than demand one is always better or worse as a result, however, we should judge each on its own merits. One person’s “generic” might be another’s “authentic.” Restraint can still provoke.

So take stock in the setting and atmosphere writer/director William Nicholson has crafted with this cinematic adaptation of his play, “The Retreat From Moscow.” Grace (Annette Bening) and Edward (Bill Nighy) are much older than the couple in Marriage Story and they aren’t entrenched in the capitalistic nightmare of an American divorce where productivity is only possible through animosity. She’s a retiree compiling an anthology of her favorite poems while he teaches at the local university when not updating Wikipedia pages. Their son Jamie (Josh O’Connor) has his own life a train ride away and the empty nest has done no favors as far as rendering cracks born from guilt, regrets, and a growing sense of marital deficiency transparent. Despite remnants of love, happiness is but a distant memory.

It’s not difficult to see why as the rote machinations of this couple’s days repeat. She sits at her desk at home while he’s at work. He quietly returns to make a tea and sit at his computer while she yearns for a glimmer of affection. Grace does everything possible to verbally, emotionally, and/or psychologically attack Edward in search of that reaction—some sign that he’s alive beneath the placating façade he’s cultivated to try and keep things civil. She wants action. He wants peace. She wants him to show passion and he wants to feel comfortable in the knowledge that their romance is implicitly stated by their conjoined lives. Their opposing personas may have sparked attraction twenty-nine years ago. Today they reveal their mutual discontent.

And that’s why he’s finally decided to leave. Is she the bad guy for pushing him? Yes and no. Is he the bad guy for lying to her while he began a new life with someone else? Yes and no. What I really like most about Nicholson’s film is that its complexity can exist without the usual blatant vilification. We can agree that Grace took things too far where it concerned making Edward who she wanted rather than accepting who he was without ignoring the fact that he refused to provide her anything of substance without those aggressive pushes. And we can conversely agree Edward should have told her about his unhappiness before the affair without ignoring the fact that he deserved to know the love Grace couldn’t give him.

No one is trying to punish the other. They’re actually trying to help. Grace is coaxing out a sign of life that does eventually arrive too late. Edward is giving her the freedom to find a person that will make her happy since he knows he never could despite what she says. Are they therefore putting words into the other’s mouth? Yes. Are they acting on what they believe is true without finding out for sure so they can brush off the selfishness of their actions and feign altruism? Yes. They do deserve to be selfish, though, if it makes them happy … as long as they also understand their happiness comes at the price of the other’s displeasure. Neither Grace’s status quo nor Edward’s detonation holds compromise.

Because the inherent drama of this uncoupling is catalyzed by Edward’s actions, he more or less falls to the background. His happy ending inevitably forces Grace and Jamie to find their own without the marriage as a crutch. Edward was the only one who knew what was coming and his bombshell doesn’t give either a chance to figure out what’s next let alone reconcile what happened. So we watch as Grace and Jamie flounder and grieve. We watch as they look into the mirrors of their souls so she can discover what it is that matters most (religion or love or a way to refocus one so it doesn’t negate the other) and he can confront how much of his identity lies in his parents’ shadows.

Questions of suicide, violence, vengeance, and acceptance rise as Grace and Jamie struggle to cope. Nighy portrays Edward with a wonderful poignancy that allows us to champion his decision and empathize with his remorse while also knowing he’s earned the other two characters’ ire. His being confident enough to defend himself proves he made the correct choice, but it doesn’t excuse the resulting mess. Jamie’s position in the middle ensures he has less to overcome—the split actually forces him to see his parents more than ever—but the duality of supporting mom and dad as adversarial figures towards one another is no less difficult. O’Connor shows how it breaks his heart to both witness it and realize he’s followed in their footsteps to implode his own relationships.

That leaves Bening to do the real heavy lifting because Grace doesn’t need a flashy metamorphosis. Would she if it meant getting Edward back? Yes, but that would make her as unhappy as him. So she must learn how to be alone again. The only thing she must change is the love that remains for Edward. How can she use those emotions to help others? How can she combat them to help herself? Grace lives in a house located near the scenic cliffs of nostalgia suddenly tainted by her present turmoil. But she isn’t lost. She still has Jamie—a product of that love. She still has poems to remind her that she isn’t the first person to feel scorned by the world. She can still survive it.

Hope Gap excels in these personal revelations that hinge upon the actors’ performances and the sorrow of pain endured complemented by the recognition of pain wrought (the film’s origins on the stage are therefore obvious). While things do ultimately get heavy-handed at times (Grace comparing Edward’s act to murder is one thing, him comparing it to the utilitarian sacrifice of war is another), it never gets boring. Nicholson doesn’t allow for the easy answers or bow-tied conclusions that would render it that way. And any lack of fireworks as far as characters sticking knives into each other doesn’t either. A three-decades-long union like theirs doesn’t allow for that type of hate. The marriage might be hopeless, but the trio’s hope for each other’s happiness isn’t.