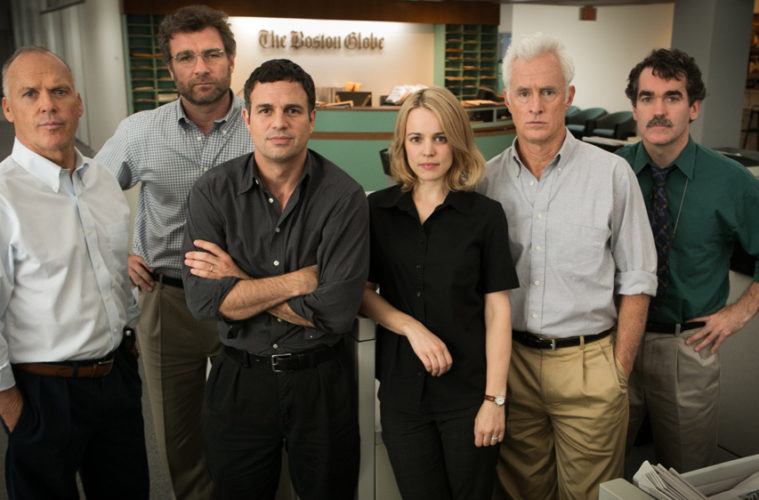 After earning some of the worst reviews of the year for The Cobbler, writer-director Tom McCarthy is returning this fall for hopefully quite a step up with Spotlight. Led by Mark Ruffalo, Michael Keaton, Rachel McAdams, Liev Schreiber, John Slattery, Stanley Tucci, Brian d’Arcy James, and Billy Crudup, the drama was recently selected to screen at both TIFF and Venice, and today brings the first trailer.

The drama tracks the true story about a team of Boston Globe reporters who uncovered a massive scandal of child abuse and cover-ups within the local Catholic Church. With a star-studded cast, it looks like a tense drama in the vein of something like All the President’s Men. Ahead of a release in November, check it out below and return for our review in the coming weeks.

Starring Michael Keaton, Mark Ruffalo, Rachel McAdams, Liev Schrieber, Brian D’Arcy James and Stanley Tucci, SPOTLIGHT tells the riveting true story of the Pulitzer Prize-winning Boston Globe investigation that would rock the city and cause a crisis in one of the world’s oldest and most trusted institutions. When the newspaper’s tenacious “Spotlight” team of reporters delve into allegations of abuse in the Catholic Church, their year-long investigation uncovers a decades-long cover-up at the highest levels of Boston’s religious, legal, and government establishment, touching off a wave of revelations around the world. Directed by Academy Award-nominee Thomas McCarthy, SPOTLIGHT is a tense investigative thriller, tracing the steps to one of the biggest crime stories in modern times.