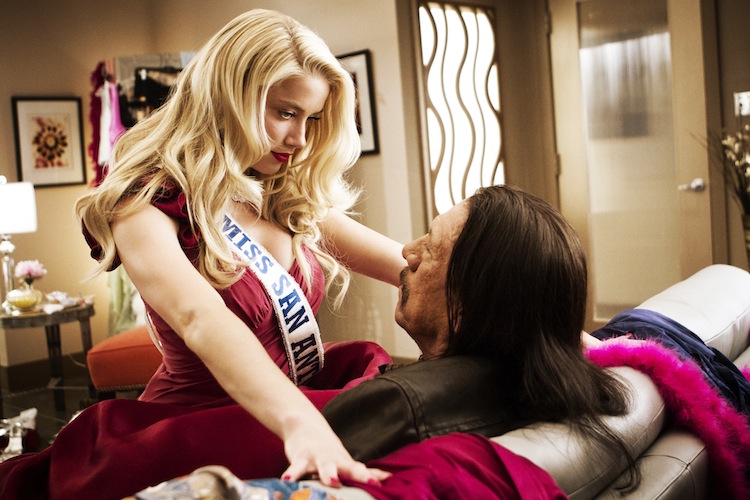 Machete is officially set to return next year, as Robert Rodriguez‘s follow-up film, aptly titled Machete Kills, has been picked up by Open Road Films. The distributor, who was recently behind End of Watch and The Grey earlier this year, have announced a vague wide 2013 release, but I’d expect a summer date is in the cards.

Rodriguez, who is gearing up to shoot another sequel with Sin City: A Dame to Kill For this fall, has amassed quite a cast for this one, including Danny Trejo, Lady Gaga, Vanessa Hudgens, Charlie Sheen, Zoe Saldana, Sofia Vergara, Edward James Olmos, William Sadler, Mark Zaror, Demián Bichir, and even Mel Gibson as the villain. To go along with the acquisition news, the distributor has released the official still, which features a sultry Amber Heard seducing our main character. Check it below, followed by the synopsis, as we wait for more concrete release details and a trailer. In MACHETE KILLS, Danny Trejo returns as ex-Federale agent MACHETE, who is recruited by the President of the United States for a mission which would be impossible for any mortal man – he must take down a madman revolutionary and an eccentric billionaire arms dealer who has hatched a plan to spread war and anarchy across the planet.

Are you looking forward to Machete Kills? What do you think of the first look?