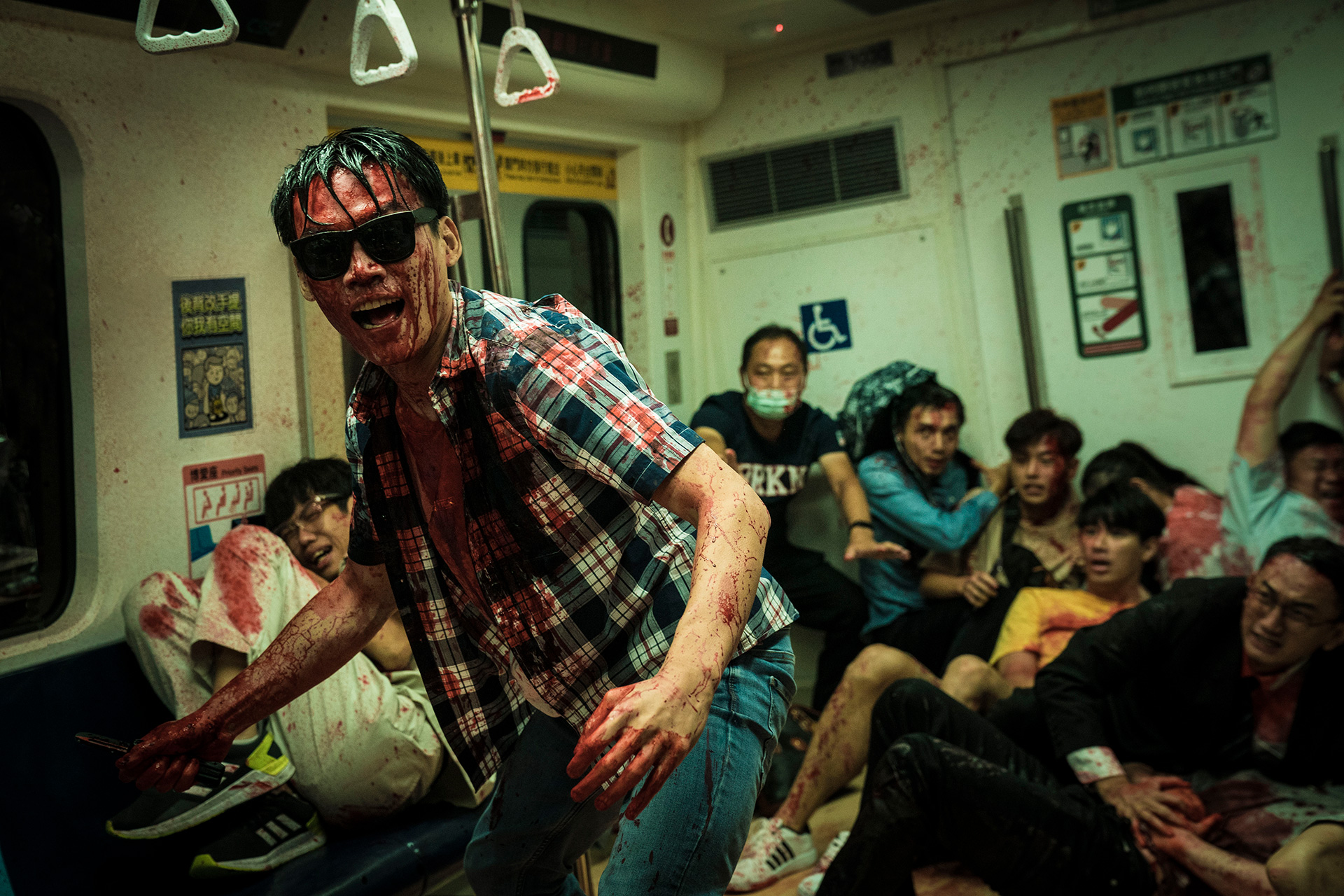 Trigger warnings accompanying The Sadness at the Fantasia International Film Festival are no joke. The acts of violence writer-director Rob Jabbaz has his characters inflict upon each other are as depraved as can be and seemingly devoid of remorse. It often feels like an Aphex Twin music video with enraged men and women stopping to turn and grin with blackened eyes before pouncing on their latest targets with relish. It thus means something when we first see tears coming down a predator’s face. We’re already used to the blood, drool, and viscera at this point, so you wouldn’t think one more bodily fluid would make all that much difference. But it does. Because it offers something more horrific than the acts themselves: helplessness.

It’s a sensation many can understand as COVID-19 warps into yet another phase. Rather than provide the loneliness of death in isolation away from family and friends, however, Jabbaz’s Alvin virus promises a limbic system prison of unbridled deviancy your brain cannot hope to curb. I don’t know much about Chinese politics—The Sadness is set in Taiwan, where the Canadian-born filmmaker produced many of his shorts—but how onscreen events mirror those of America circa 2020 cannot be denied. One virologist desperately tries warning the country that the virus’ rabies component could mutate into something the world isn’t prepared to handle while the media embraces election-year politicization to pretend the scientific community’s fears are all a hoax.

Results skew closer to Mayhem than 28 Days Later as the infected are less zombie-like than hedonists lacking impulse control. Some are crying and thus unable to stop themselves from feeding on blood, sex, and fear; others are simply enjoying the ride, like an unhinged businessman (Tzu-Chiang Wang) who believes politeness and compliments earn him the right to claim any woman he deems worthy of both. The latter have personalized desires that motivate them to separate from bigger parties so they may pursue them unencumbered. Hoards are therefore coincidences—groups gravitating towards the same buffet with nothing but the need to create carnage driving them. Wang has his sights on Kat (Regina Lei) and will stop at nothing until he has her all to himself.

She becomes one of two leads for Jabbaz to follow. The other is her boyfriend Jim (Berant Zhu). He watches things fall apart first upon his return home after dropping Kat off at the subway station. An infected woman enters the coffeeshop and spits virus-infused saliva into the face of a customer before a domino effect of violence ripples through the building. Jim must do whatever he can to escape, then whatever he can to find his love while she encounters a nightmare of her own aboard her train. They will both be covered in blood before long—being a bystander means showering in the crimson rain of knife wounds and blunt-force trauma. Nowhere is safe as humanity’s universal impatience makes everyone susceptible.

In that vein: some of the best moments are when we assume someone is about to go feral only to discover they’re merely misogynists. It’s a nice extra layer wherein the lines between one person’s justified frustration, another’s embellished scorn, and a third’s uncontrollable hunger are blurred. So who can Kat hope to trust? Because, more than time, it seems emotional triggers become the real catalyst for the mutated infection. People minding their business appear normal until someone pushes them too far and their eyes turn black as night. Sometimes it happens to a victim as they’re getting abused—sadistic acts that viewers should probably worry about most, considering they include raped men and women who want more once the switch is flipped.

Sex and violence are merged throughout; even hallucinations find characters turning witnessed brutality into orgasmic pleasure. Love isn’t going to be enough to save Kat and Jim. If anything, it could end up destroying them since infection would transform each into their depraved target. The whole thus proves a nihilistic affair, Jabbaz having no qualms about making everything as bleak as possible. Don’t be surprised, then, when chance occurrences promising salvation only end up turning sour quick. To find safety one second ultimately becomes finding a new place in which to survive yet another onslaught. Heroics are often in vain because the person you save has more chance of devolving into a beast of prey than they do breathing a deep sigh of relief.

The Sadness is somewhat unique for not necessarily treating its antagonists different than its heroes. They’re all in the same rapidly worsening circumstances to the point where Wang’s progressions can’t be any less important to the overall story than Kat and Jim’s paths. Following an assumed one-off villain after his victims have already escaped feels weird at first, but you get used to it quick once you realize there’s little if anything that separates him from them. The longer we spend with Kat or Jim increases the chances that the other has turned offscreen anyway. And we almost anticipate that result with excitement because the performances Wang and the other monsters deliver are memorably outlandish. Why not let Lei and Zhu be unhinged too?

The Sadness played as part of the Fantasia International Film Festival.